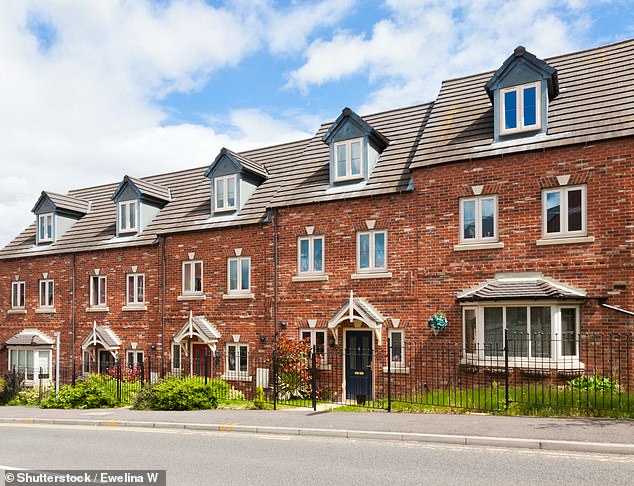 Biggest home loans squeeze for a decade: Santander starts frantic rush to scale back mortgages as banks get tough on cost of living crisis

Borrowers with soaring household bills and squeezed incomes could struggle to get the home loans they need as banks begin the biggest clampdown on mortgage checks in more than a decade.

Mortgage brokers have warned that soaring energy bills, tax rises, and the surging cost of goods have prompted banks to tighten their mortgage affordability tests – making it harder to borrow as much.

Last week, Santander made it tougher for borrowers to meet its lending criteria because it told brokers it would reflect the rises in household bills, National Insurance and taxes.

Squeeze: Mortgage brokers have warned that soaring energy bills, tax rises, and the surging cost of goods have prompted banks to tighten their mortgage affordability tests

Property sources said the punitive checks will make it more difficult to take out larger loans – meaning many people are at risk of being unable to purchase their desired home.

They warned that households with high monthly bills – such as those with large credit card debts, or divorcees paying chunky settlements – will be particularly penalised.

Although there was a crackdown on mortgages in 2014 when affordability rules came into force, experts said the rising rates and soaring bills are making it even tougher.

Ray Boulger, a senior analyst at broker John Charcol, said: ‘It is the biggest tightening [in mortgage lending] since 2009 because interest rates are increasing and we are experiencing the largest rise in the cost of living since the 1980s.

‘The difference between now and 2009 is that banks had a huge shortage of funds then, whereas now the issue is that it’s more difficult for some people to borrow.’

One banker said: ‘Some lenders are already changing affordability tests behind the scenes to try to mitigate the cost of living issues we’re starting to see.’

Banks are changing their ‘affordability calculators’.

Many banks rely on household spending figures from the Office for National Statistics (ONS) to judge a borrower’s spending – even if an applicant’s actual monthly outgoings are lower – to see if borrowers can afford their monthly mortgage after bills and expenses.

But this ONS data will soon include higher energy costs, with the result that some people might not be allowed to borrow as much in the coming months.

Last week, Santander told mortgage brokers it was updating its affordability test to reflect the latest ONS data. It will also take into account the increase in National Insurance contributions and various tax rates.

It added that it is increasing the stress test on its five-year fixed rate deals – potentially making it harder for people to borrow over a longer period.

Andrew Montlake, of mortgage broker Coreco, said: ‘We’re starting to hear whispers of banks tightening affordability checks. All the lenders are talking about it. You can see a situation where some people can’t borrow what they need, which means they’ll have to look at cheaper property – in cheaper areas.

‘I suspect we’ll see some people miss out, especially those in need of large loans with small deposits.’

Other banks could soon follow suit. NatWest said its affordability tests were ‘continually under review based on market conditions’.

Barclays said: ‘We continuously monitor cost of living, accommodating changes where appropriate within our core affordability models and assumptions on an ongoing basis.’

Banks have already begun to implement more stringent ‘stress tests’ on lending as interest rates increase. It is designed to check if borrowers can afford a standard variable rate plus 3 per cent.

Halifax said the average house price hit a record £282,753 in March, a tenth higher than the previous year – marking the biggest annual jump since the financial crisis.

Russell Galley, a managing director of Halifax, said: ‘Buyers are dealing with the prospect of higher interest rates and a higher cost of living.

‘With affordability metrics already extremely stretched, these factors should lead to a slowdown in house price inflation over the next year.’

In another blow to homeowners, the average interest rate on fixed mortgages has also risen since the start of the year following the Bank of England’s decision to hike the base rate.

Some links in this article may be affiliate links. If you click on them we may earn a small commission. That helps us fund This Is Money, and keep it free to use. We do not write articles to promote products. We do not allow any commercial relationship to affect our editorial independence.

Britney Spears’ sons Sean Preston and Jayden James will not be attending her wedding...