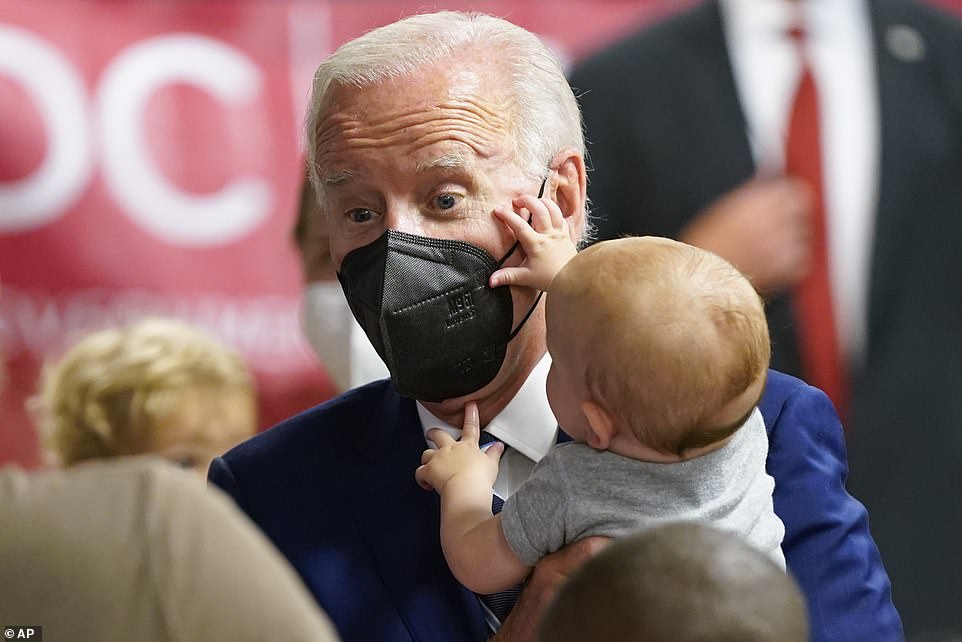 ‘We’re the only country in the world doing this right now’: Biden boasts about vaccinating under-5s as he takes selfies with toddlers and comforts crying boy named Joe

President Joe Biden on Tuesday took selfies with toddlers getting their first covid shot and comforted a crying little boy named Joseph when he and Jill visited a vaccine center in Washington D.C.

The first couple’s visit came as nearly all Americans can now get vaccinated after the FDA and CDC approved shots for those six months and above.

‘We’re the only country in the world doing this right now,’ Biden said.  ‘This is a great day for you all. Thanks for the example you are setting.’

He also spoke of his youngest grandson, Beau, aged two, being newly eligible for vaccination.

‘We got to get the two year old vaccinated,’ he said.

And he joked about how he was having a good time during his visit: ‘Everybody knows I like kids better than people.’

The president dispensed hugs as he was surrounded by toddlers. He carried a few of them around as he and the first lady chatted with parents and kids alike. One little boy kept pulling at the president’s face mask as Biden toted him throughout the room.

‘Look it’s the president,’ one child said upon Biden’s arrival. 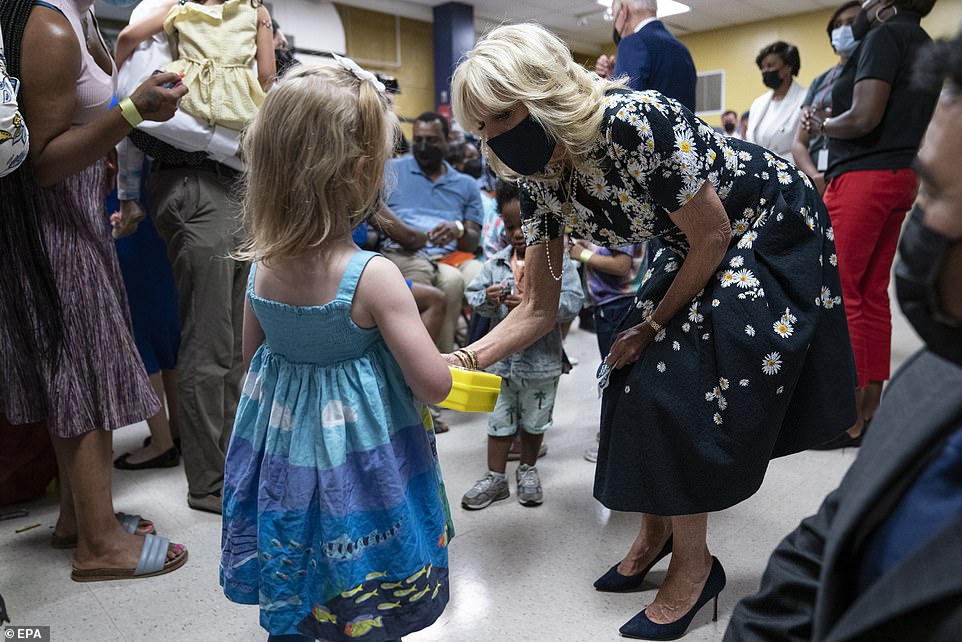 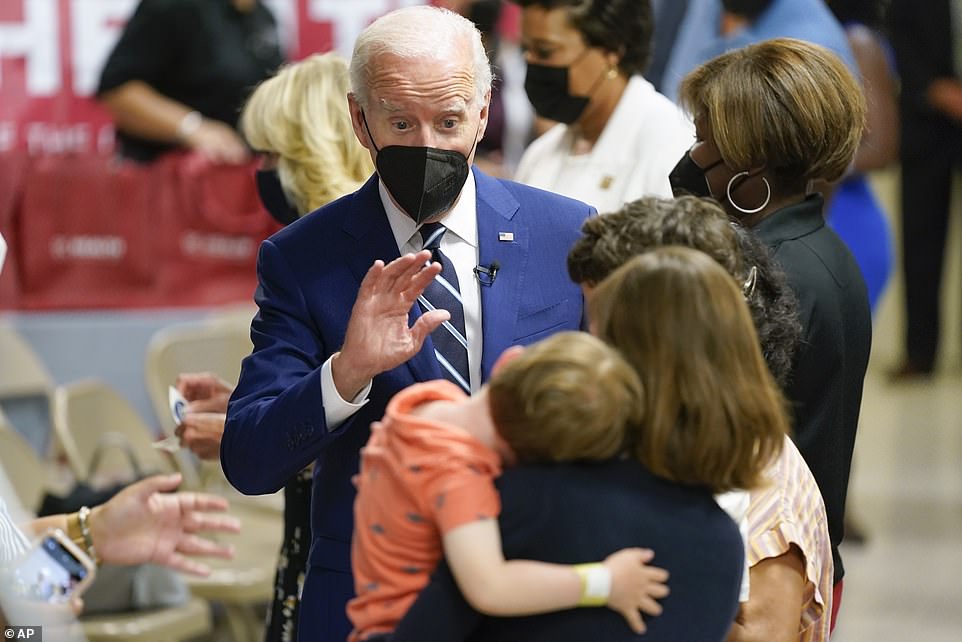 President Biden comforted a toddler named Joseph, who was upset after his covid vaccine 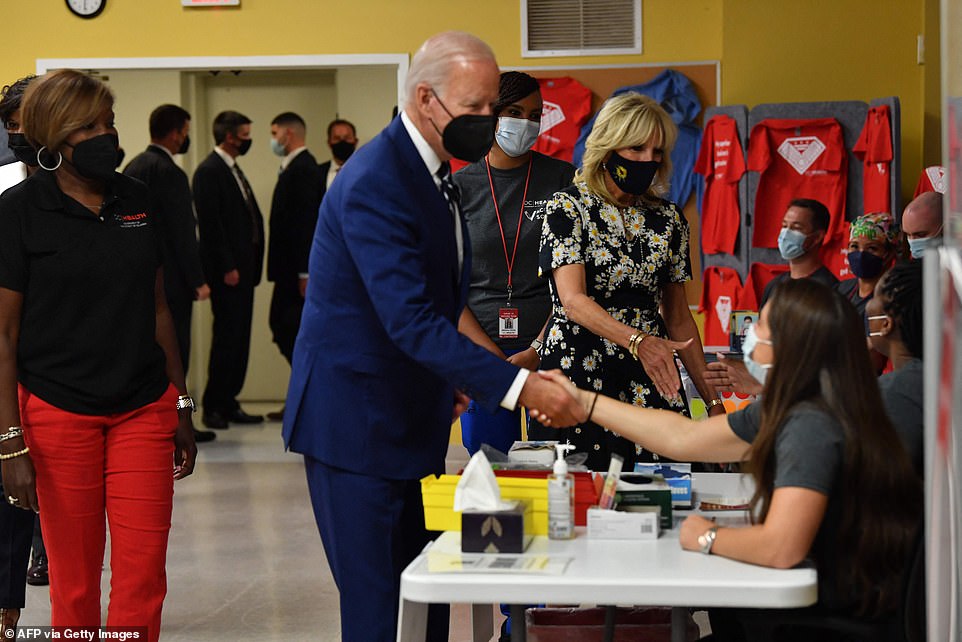 President Biden and Jill Biden arrive at the clinic 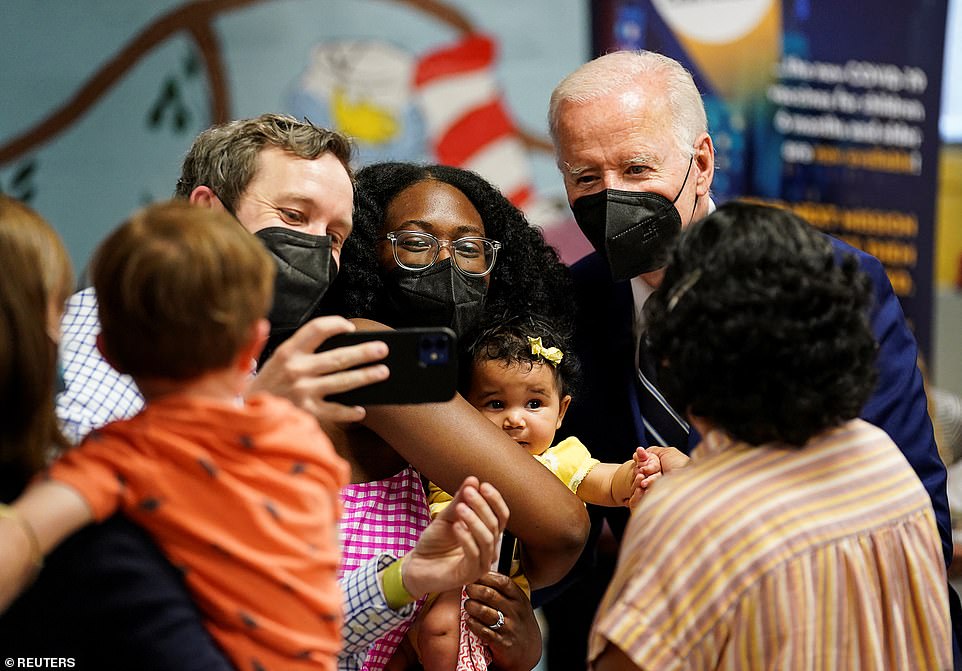 President Biden posed for selfies with parents and kids 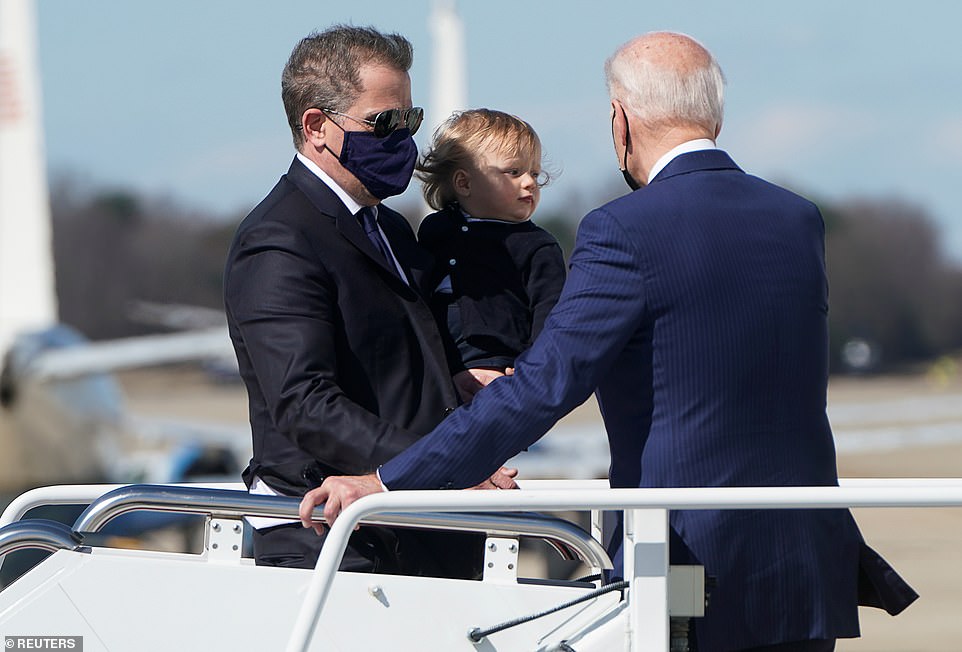 The president also posed for selfies with parents and kids.

‘Got it,’ he asked one mom after a pic was snapped.

And he comforted another little boy who was curled up in his mom’s arms crying after his shot.

‘Joseph – that’s my name too,’ the president told the boy, adding that ‘Joey’ was a great nickname for them.

The Bidens visited the COVID Center at the Church of the Holy Communion in Washington D.C.  as the U.S. has begun distributing COVID vaccines for children as young as six months around the country.

The scene was quite chaotic with children running around, some crying, as they waited to get the first shot in their arms. Parents and toddlers alike mingled with the Bidens.

The first couple handed out giant blue vaccine stickers – some of which were almost too big for the kids to wear. D.C Mayor Muriel Bowser joined them for the visit.

‘The United States is now the first country in the world offers safe and effective COVID 19 Vaccines for Children as young as six months old, ‘ Biden said later at the White House.

He joked he had so much fun at the clinic he hadn’t wanted to leave the kids. 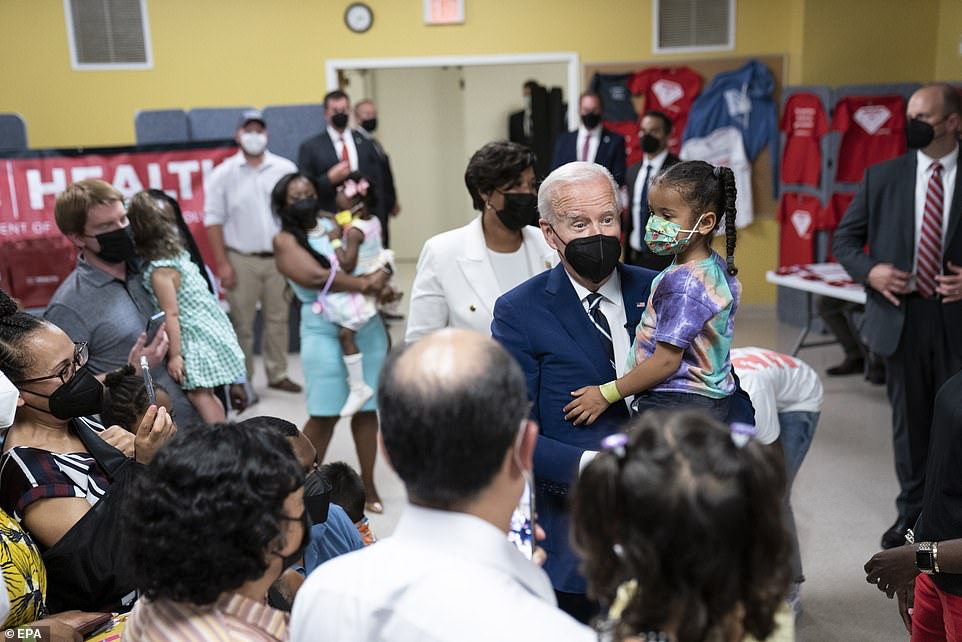 President Biden carried around a few toddlers during the clinic visit 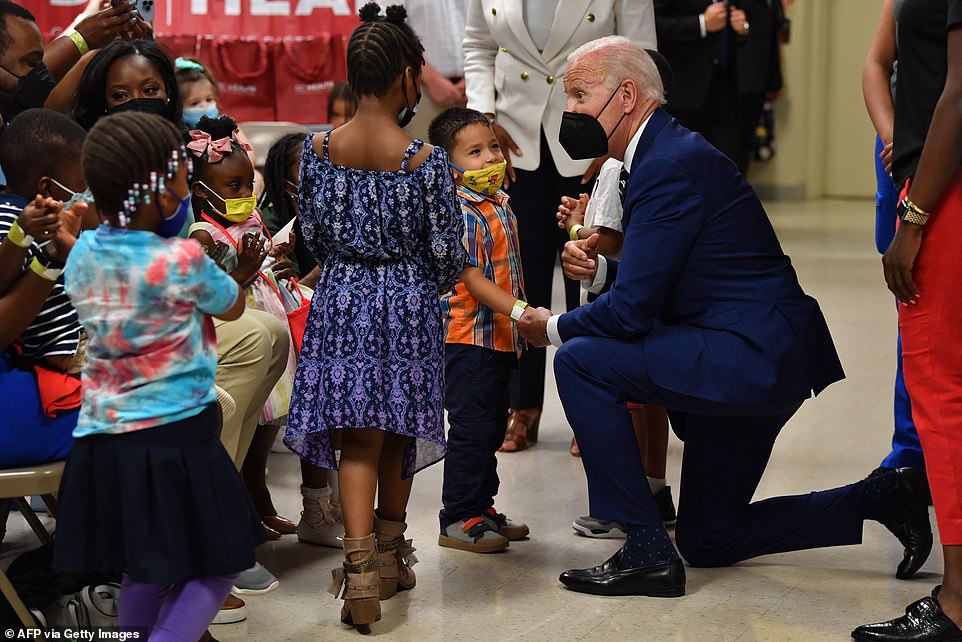 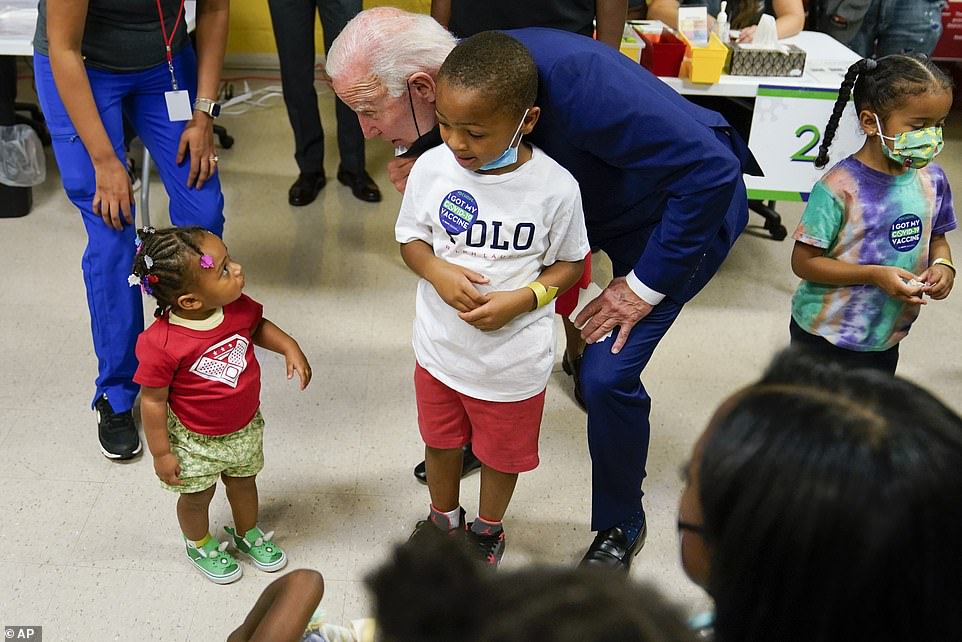 President Biden gave hugs and took selfies with the kids 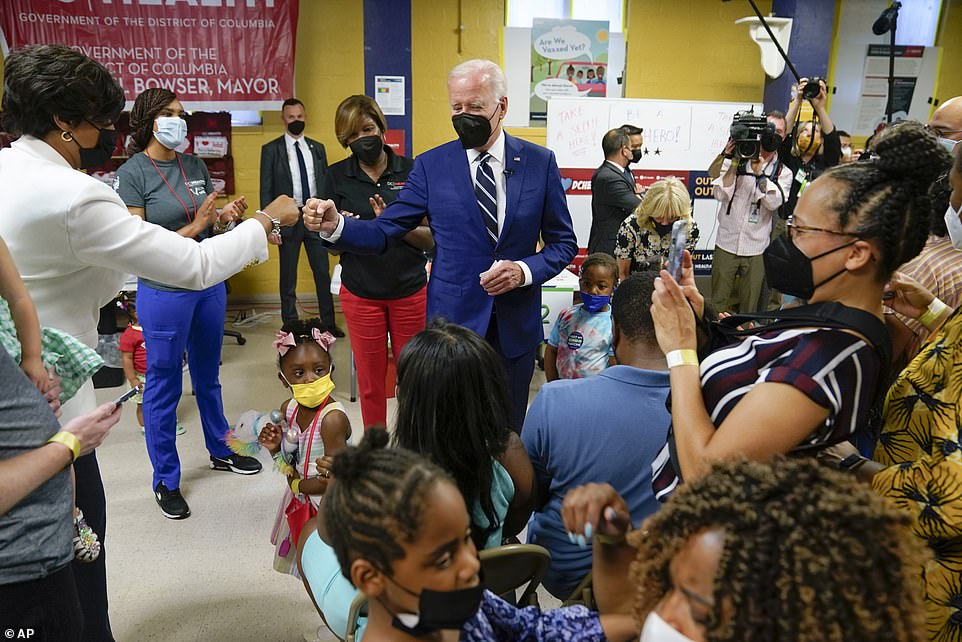 It’s unclear how many parents around the country will get their kids vaccinated.

Polling for the Kaiser Family Foundation found that only about one in five parents of children under age five (18 percent) are eager to get their child vaccinated right away, while a larger share (38 percent) say they plan to wait a while to see how the vaccine is working for others.

There was also limited demand for the shots last time the FDA made them eligible for a younger age group, children aged five to 11.

According to official CDC data, only 30 percent of Americans in the age group are fully vaccinated, half of the 60 percent between ages 12 to 17. Minors in general have low vaccination rates, with the youngest adults having vaccine uptake of around 80 percent.

Amazon slashes the price of Peloton bikes by more than $200 just months after...

Blac Chyna says she ‘could be doing better’ and was forced to sell her...