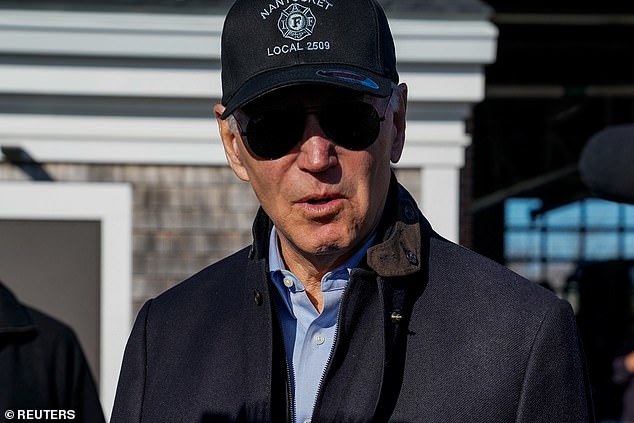 President Joe Biden called the sale of semiautomatic weapons ‘sick’ and continued to call for an assault weapons ban and better red flag laws in the wake of mass shootings at a Chesapeake, Virginia Walmart and a Colorado Springs LGBTQ club.

‘The idea that we still allow semiautomatic weapons to be purchased is sick,’ Biden told reporters on Thursday, during a quick stop at the Nantucket Fire Department, to bring first responders some Thanksgiving pumpkin pie. ‘It’s just sick. It has no, no social redeeming value. Zero. None. Not a single, solitary rationale for it except profit for the gun manufacturers.’

As he walked up to reporters, he also pushed back on criticism of red flag laws – that they could be used to target people and take away their guns, instead of remove weapons from individuals who are truly dangerous – calling that notion ‘ridiculous.’

He mentioned how Delaware, with the help of his son, the late Beau Biden, had one of the first red flag laws in the country ‘and it made a lot of difference.’

Biden said he would continue to push for an assault weapons ban.

When asked specifically if he’d try to push Congress to make progress on the issue in the lame duck, he added, ‘I’m going to do it whenever – I’ve got to make that assessment as I get in and start counting votes.’

President Joe Biden called the sale of semiautomatic weapons ‘sick’ and continued to call for an assault weapons ban and better red flag laws in the wake of mass shootings at a Chesapeake, Virginia Walmart and a Colorado Springs LGBTQ club 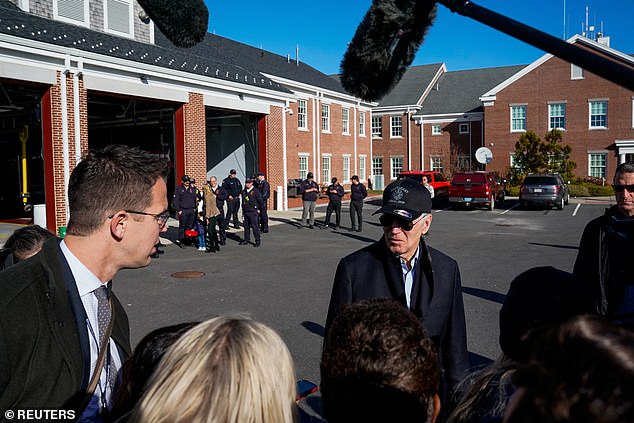 The Democrats will lose control of the House of Representatives when the new Congress starts in early January, but they retain a majority in the Senate.

The Chesapeake attack happened three days after people at an LGBTQ club in Colorado Springs, Colorado were gunned down and a week after a former University of Virginia football killed three members of the current roster.

While these were the first public remarks the president made since Tuesday night’s Chesapeake shooting, the laws Biden mentioned would have done more to stop the shooter in Colorado Springs.

The gunman, 22-year-old Anderson Lee Aldrich, brought an AR-style weapon and a handgun to Club Q on Saturday night, and had been previously charged with felony menacing and first-degree kidnapping after making a bomb threat.

The White House said later Thursday that the president and first lady had called the owners of Club Q, Nic Grzecka and Matthew Haynes, to offer condolences.

‘They reiterated their support for the community as well as their commitment to fighting back against hate and gun violence. They also thanked Nic and Matthew for the incredible contributions they have made and will continue to make to Colorado Springs,’ the White House said.

The Chesapeake, Virginia shooter used a pistol, which wouldn’t fall under any such ban.

On Wednesday, as had already arrived on Nantucket for his Thanksgiving break, the president sent out condolences to the Chesapeake, Virginia families in a statement.

Biden noted how families will be mourning on ‘one of our most cherished holidays’ rather than celebrating with their families. 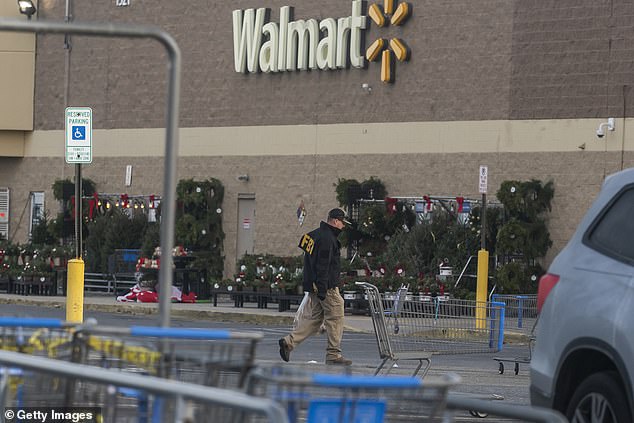 Biden spoke in response to the shooting at a Walmart in Chesapeake, Virginia, on Tuesday that killed six (pictured afterwards) 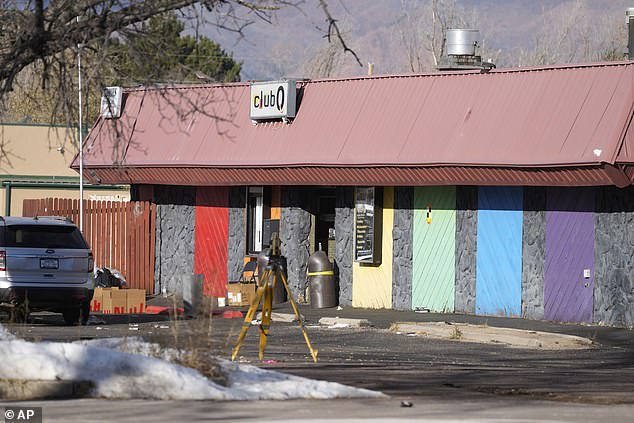 He was also referring to the Club Q massacre at a gay nightclub in Colorado, which saw six killed by a non-binary shooter armed with an AR-15

‘Because of yet another horrific and senseless act of violence, there are now even more tables across the country that will have empty seats this Thanksgiving,’ Biden wrote in a statement.

‘Jill and I grieve for those families, for the Chesapeake community, and for the Commonwealth of Virginia, which just suffered a terrible shooting at the University of Virginia this month,’ he said.

‘We also mourn for all those across America who have lost loved ones to these tragic shootings that we must come together as a nation to stand against,’ Biden added.

At least five of the six victims were fellow employees – who police identified as Lorenzo Gamble, Brian Pendleton, Kellie Pyle, Randall Blevins, Tyneka Johnson and a 16-year-old boy, whose name was withheld because he’s a minor.

Police revealed that Bing had a manifesto, in which he wrote that he was being harassed by his Walmart colleagues.

A neighbor who lived next to Bing described said she saw him leave for his usual late shift in silence.

Speaking to DailyMail.com, she said: ‘I am shocked, especially when I saw the amount of people that were dead. I was even more shocked when I found out it was him.’

‘I only realized when I saw the FBI here this morning. My daughter saw them get here last night with the battering ram but I didn’t hear anything,’ the neighbor continued. ‘He kept himself to himself, he was always alone. No one else lived in that house.’

The neighbor recalled seeing ‘one guy’ at Bing’s home a few months ago ‘but that was it.’

‘It’s only been him. I would see him mowing his lawn and things but he would never talk. He was odd. ‘I tried to talk to him but he just wasn’t interested at all,’ she said.

‘I’m so glad that I didn’t speak to him. He seemed as he normally did, just got in his car and drove off. Nothing seemed different,’ the neighbor continued.

‘Whole time he was here I never saw him with a gun or anything at all. It’s shocking. It’s a nice quiet area,’ she added.

Nicki Aycox – an actress who starred on Supernatural, Dark Blue and more –...

Inflation dips slightly to 8.3% but remains near four-decade high

Mel Gibson can testify in Harvey Weinstein’s LA trial, but can’t be asked about...