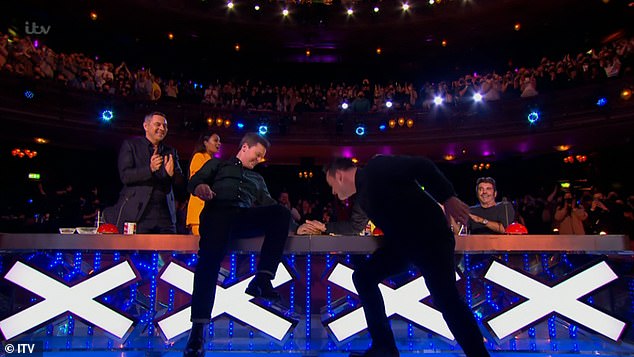 And the pair’s power was used to catapult Japanese magician Keiichi Iwasaki all the way to the semi-finals – after his entertaining audition.

49-year-old Keiichi performed an array of illusionist tricks for judges Simon Cowell, Alesha Dixon, Amanda Holden and David Walliams – who were left in awe of the performance.

The performer admitted that it was ‘my dream’ to come on the show, telling the judges he was ‘a little bit nervous’ before performing.

But despite the pre-performance nerves, Keiichi had the audience in stitches from the get-go, pulling Ant and Dec on stage to assist him.

In a hilarious mix up, he referred to the pair as ‘Dec and Ant’ rather than their preferred way around, as Ant was quick to correct the magician. 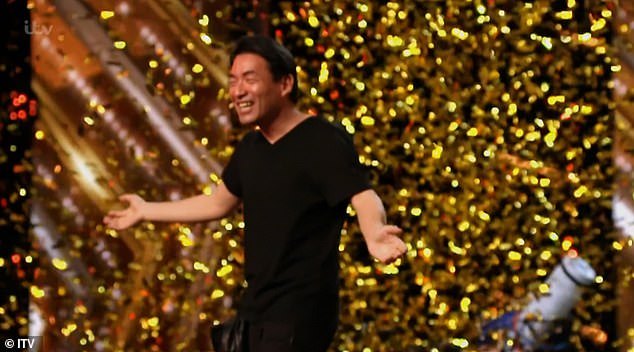 Congratulations! The pair used the power to catapult Japanese magician Keiichi Iwasaki all the way to the semi-finals – who was over the moon with the honour

Performing a card trick, Keiichi asked Dec to choose a card and then place it back in the pile – which he later pulled out from inside Dec’s shirt.

He then used a mind boggling trick to move the card without touching it, with the judges shocked by the floating playing card.

Another trick involved a £20 note, which the magician folded and probed at without ever touching it.

Keiichi then enlisted Alesha as his next assistant, as he floated a ring through the air and all the way onto her finger. 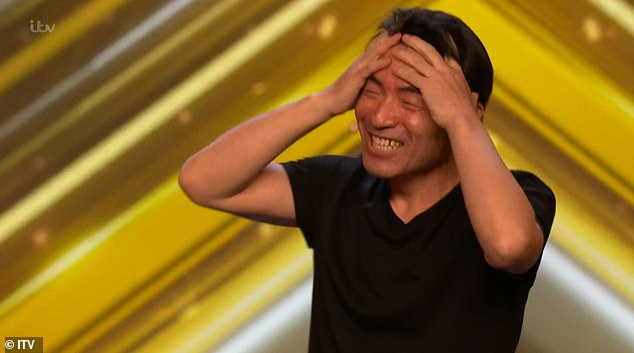 Surprise! Keiichi had his head in his hands as he realised what was going on, displaying his utter shock 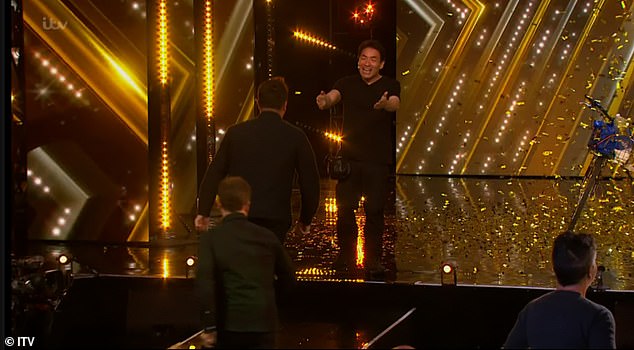 Grateful: He reached out to give Ant and Dec a hug as they returned from the panel, thanking each of them 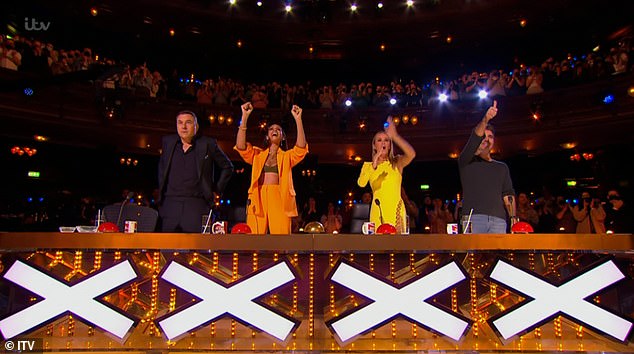 Standing ovation: Simon Cowell, Amanda Holden, Alesha Dixon and David Walliams were all happy with the choice – after being blown away by Keiichi

The judges and audience were beyond impressed by the performance, giving the star a standing ovation.

Amanda described the performance as ‘faultless’, while David dubbed him as the ‘funniest person we’ve seen’.

It got a seal of approval from Simon too, who said that his son, Eric, would ‘absolutely love’ Keiichi.

But before the judges all and a chance to give a final verdict, Ant and Dec ran onto the stage and shouted ‘no, no, no!’. 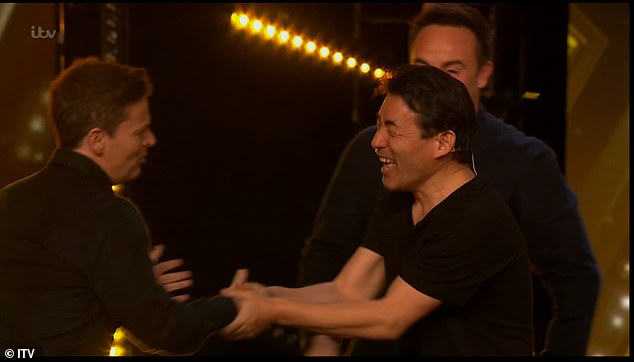 Bonding: Ant and Dec congratulated their golden buzzer act, shaking his hand on the stage 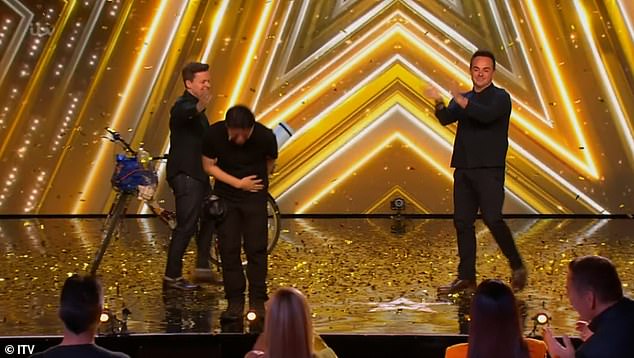 Fans: He gave a bow to the rowdy audience, who were all delighted with the decision 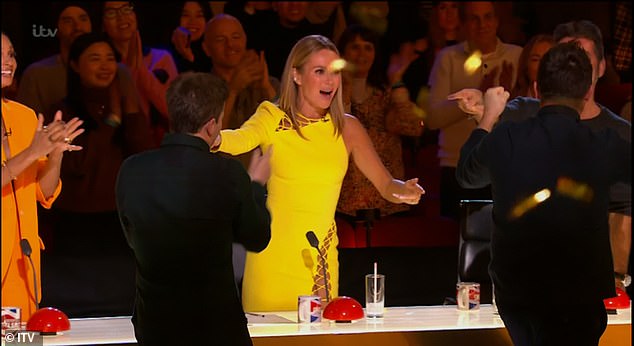 Inkling: Amanda and Simon told the hosting duo that they ‘knew it’ after the buzzer was pressed

The audience and judges began to go wild as the cheeky duo ran to the judging panel, before telling Keiichi: ‘You, my friend, get the golden buzzer’

The magician was ecstatic with the result, placing two hands on his head as golden confetti began to fill the stage in celebration.

Unbelieving of the gesture, the performer pulled Ant and Dec in for handshakes and a hug as he thanked them, sharing: ‘Thank you so much. I can’t explain my emotion, I never expected the golden buzzer. Thank you so much’

Keiichi will now skip the bootcamp stage of the competition, automatically gaining a place in the semi-final.

When questioned by the judges on what he would do with the prize money if he won the show, Keiichi explained he was planning to sail the Atlantic ocean – so would buy a boat. 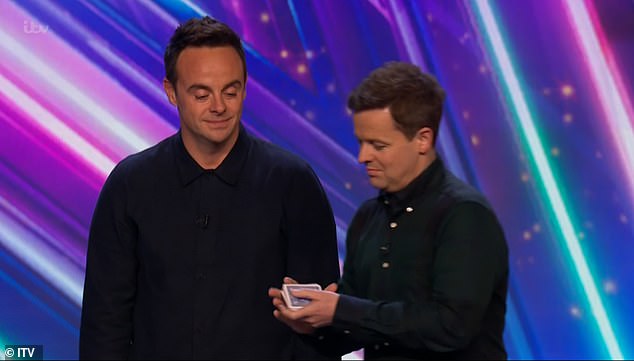 Assistants: Keiichi got Ant and Dec involved during the act, hilariously getting their names mixed up 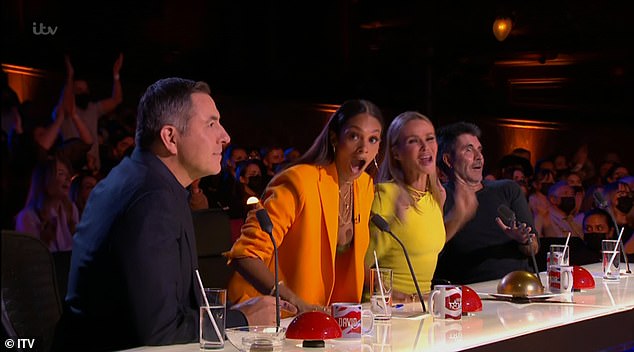 Happy: The judges were all impressed, with Simon saying that his son Eric would ‘absolutely love it’ 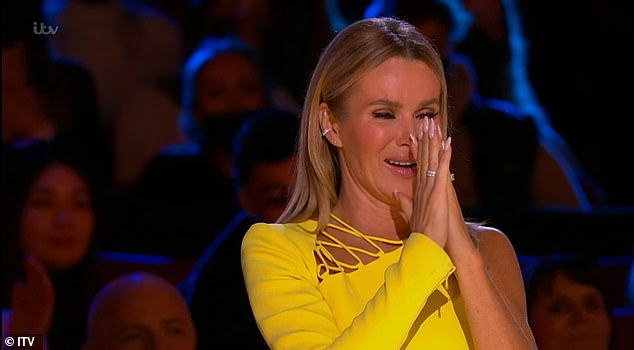 Perfect audition: Amanda described the audition as ‘faultless’ before showing her joy at the buzzer

New stealth B-21 bomber inspired by a courageous group of WWII pilots known as...