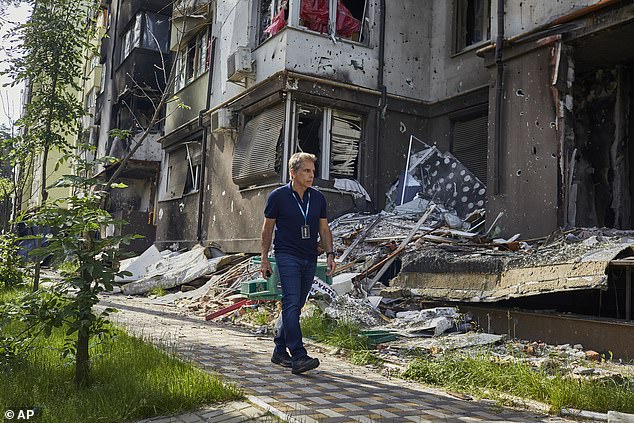 Hollywood star Ben Stiller has said ‘seeking safety is a right and it needs to be upheld for every person’ during a visit to Ukraine.

The actor, 56, arrived in Poland on Saturday and was pictured in the large south-eastern city of Rzeszow, close to the border, speaking to aid workers in a storage facility.

On Monday morning, Stiller, who is a long-term Goodwill ambassador for the United Nations High Commissioner for Refugees (UNHCR) – the UN refugee agency – visited Ukraine on World Refugee Day.

The actor was seen walking among bombed out buildings in the city of Irpin where Russian forces have bombed residential buildings.

In a video posted to his Instagram account, Stiller said: ‘Hey, I’m Ben Stiller, and I’m here in Ukraine. I’m meeting people who’ve been impacted by the war and hearing how it’s changed their lives.

‘War and violence are devastating people all over the world. Nobody chooses to flee their home. Seeking safety is a right, and it needs to be upheld for every person.’ 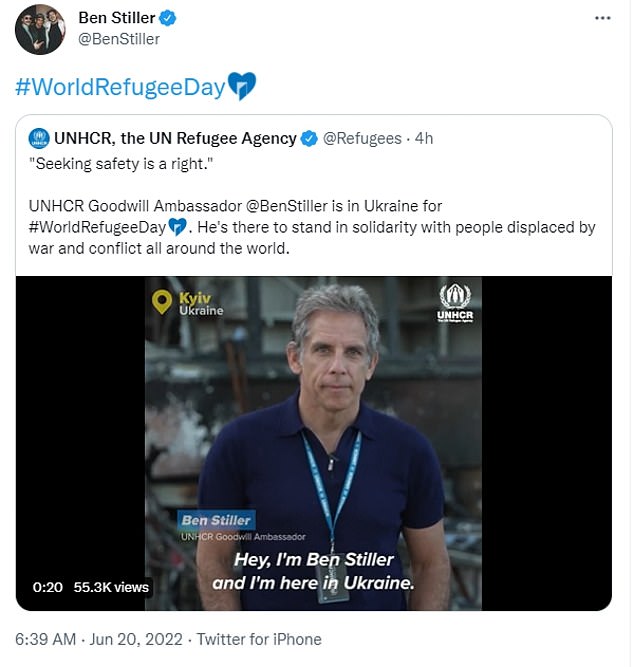 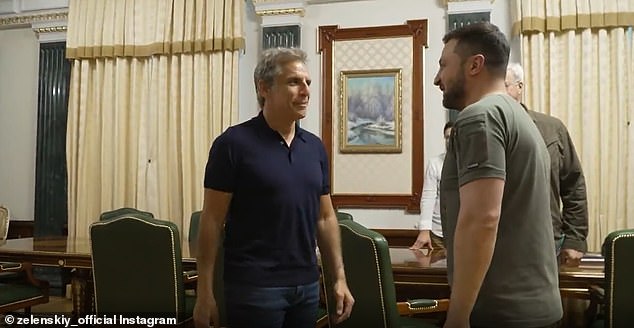 Footage emerged on Sunday of Hollywood actor in Ukraine after recently visiting refugees fleeing the war in Poland.

The Night At The Museum actor met with Ukrainian families afflicted by Russia’s war, according to the UN’s refugee agency.

He was videoed in Lviv, in western Ukraine speaking with people wearing UN insignia.

Earlier on Sunday Stiller, said he was at the Medyka border between Poland and Ukraine where he ‘met families who fled the war in Ukraine, leaving loved ones behind, with no idea when they will be able to return home.’

The footage showed him speaking on the phone and then with what appeared to be resident’s in Ukraine’s western capital, in an unannounced visit.

‘It’s nice that people make this public and come to help on their own,’ said a Ukrainian TikToker who spotted the celerity. 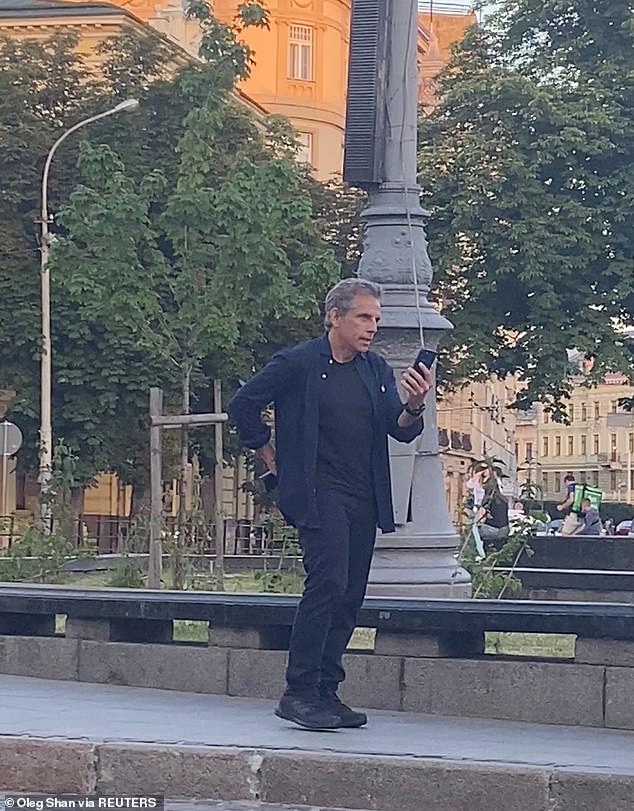 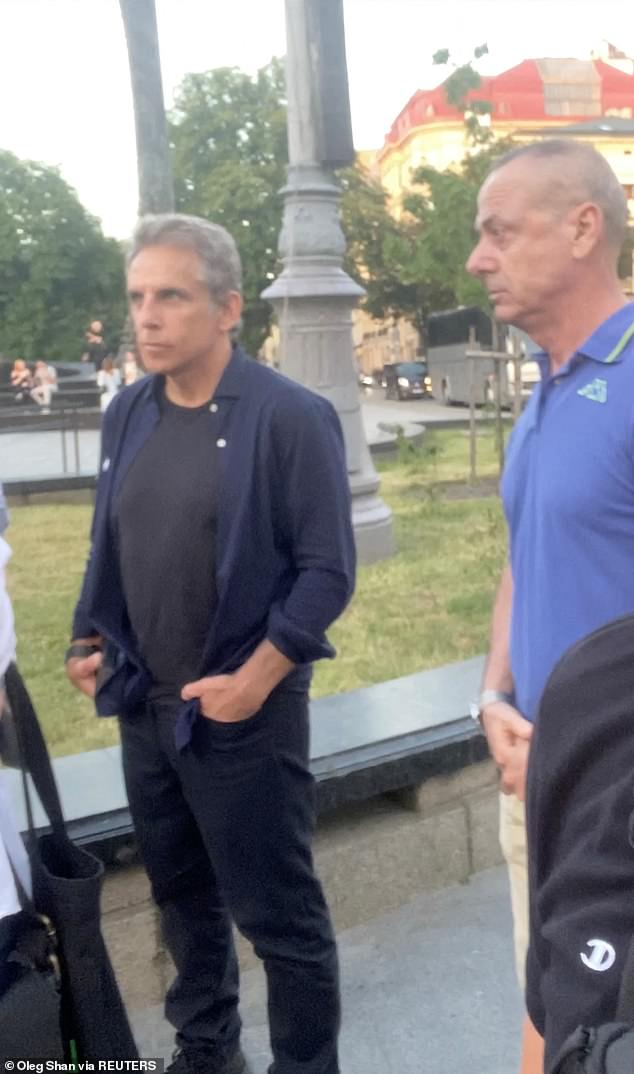 Lviv is a 2.5 hour drive from Rzeszow, where Stiller was visiting on behalf of the UN refugee agency. Stiller said on Sunday he had arrived at the Polish-Ukrainian border, only an hour and a half away from Lviv

A Ukrainian resident uploaded the footage to TikTok, with locals reacting with enthusiasm to the actor’s impromptu visit.

‘Super, why do your heroes in peacetime during the war also turn out to be wonderful people?’ said one TikTok commenter.

‘I adore this actor,’ said another, in Ukrainian.

On Saturday, Stiller stopped over in the large south-eastern Polish city of Rzeszow, close to the border,  where he spoke to aid workers in a storage facility.

More than 3.5 million people are thought to have crossed over into Poland since the war began in February.

Stiller’s trip is aimed at helping share ‘stories of the human impact of war’ and to ‘amplify calls for solidarity’. 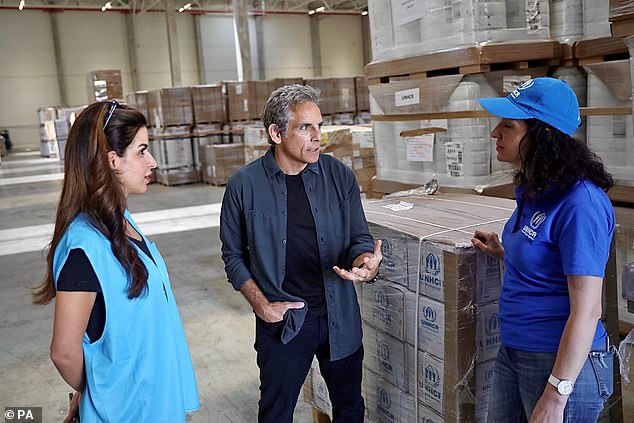 Actor Ben Stiller, 56, has arrived in Poland to meet refugees forced to flee the war in Ukraine 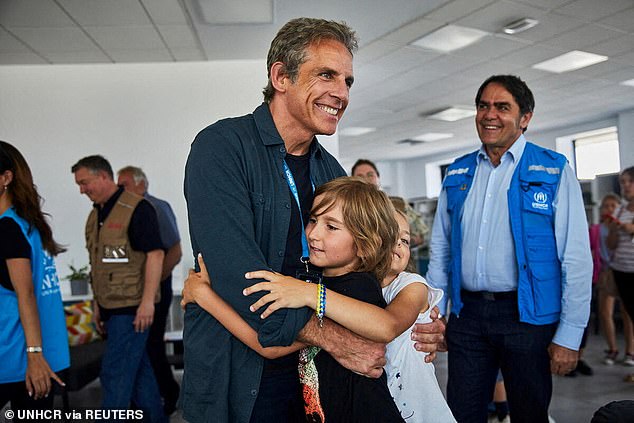 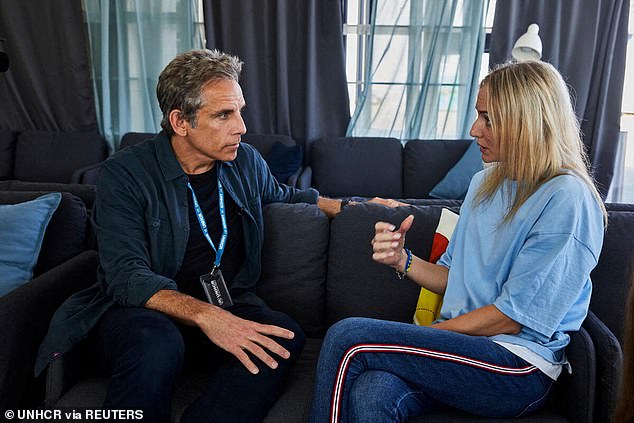 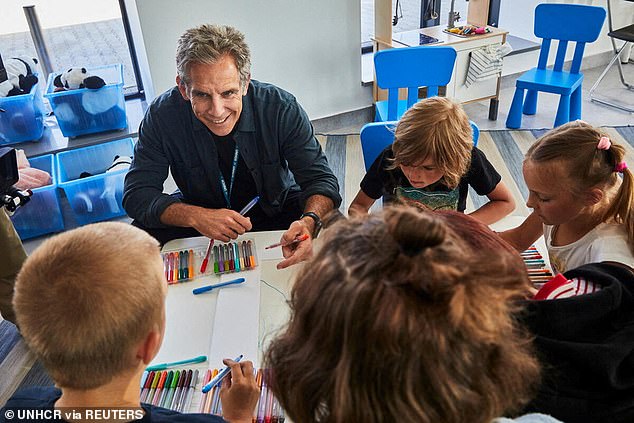 Stiller meets children at the UNHCR Protection Hub in Medyka, Poland, on June 18

Stiller took to Twitter and posting a photograph of himself speaking with two aid workers, said: ‘I’ve just arrived in Poland with UNHCR, to meet families whose lives have been torn apart by war and violence in Ukraine.

‘Millions have been forced to flee their homes with over 90% being women and children.

‘I’m here to learn, to share stories that illustrate the human impact of war and to amplify calls for solidarity.

‘Everyone has the right to seek safety. Whoever, wherever, whenever.’ 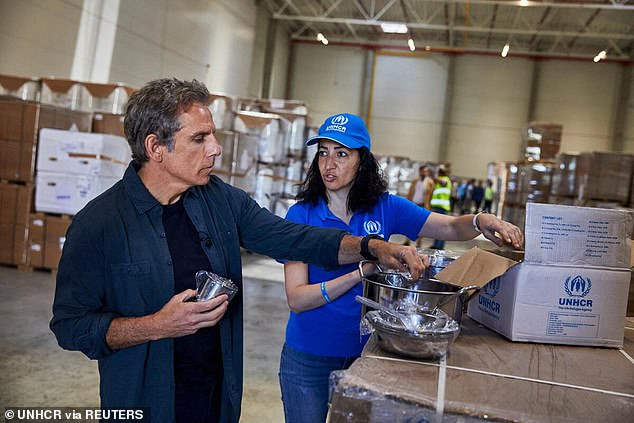 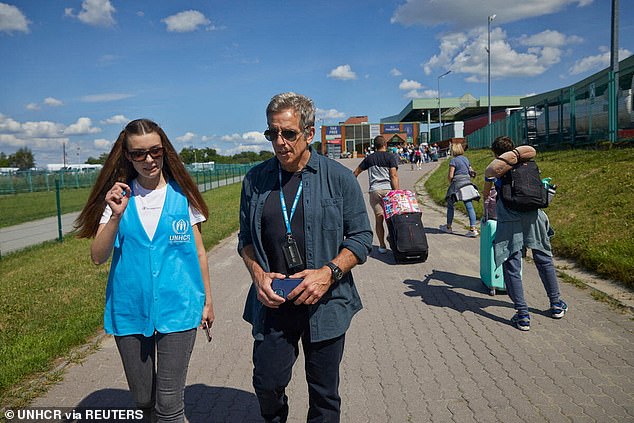 Stiller started working with the UNHCR in 2016 and has travelled with the body to meet refugees in Germany, Jordan, Guatemala and Lebanon.

In 2019, he testified before the Senate Foreign Relations Committee on the humanitarian crisis in Syria, where he pleaded with lawmakers.

He said: ‘We must not look away, we cannot let Syrian families go deeper into destitution and we cannot let their children be part of a lost generation.’

Stiller is not the first celebrity to involve themselves in humanitarian work for Ukraine, with Mila Kunis and Ashton Kutcher raising $35 million for the country and David Beckham handing over his Instagram page to a Ukrainian doctor in Kharkiv for the day. 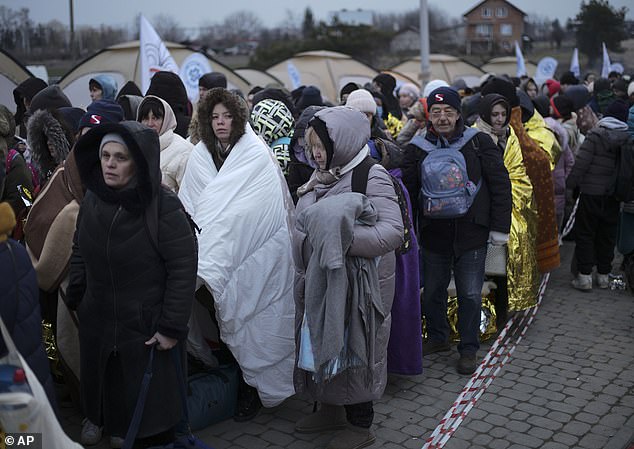 More than 3.5 million refugees are thought to have crossed over into Poland from Ukraine since the conflict began in February (file pic from March 2022)

The news comes as the grinding battle over Severodonetsk continues, with Russia making marginal gains but finding its forces whittled down to the bone due to the near four-month campaign.

The Institute said Russia will likely take control of Severodonetsk, but at the cost of concentrating its forces, making it vulnerable to attack in other areas.

If successful in Severodonetsk, the Russians will likely advance into Metolkine further into the country.

Just over an hour’s drive away from Severodonetsk, Ukrainian artillery has been bombing railway lines used to supply Russian offensive operations toward Slovyansk.

Russia is trying to push the Ukrainian forces back, hoping to force the enemy artillery out of range of their supply lines.

But so far, Russia is struggling to capture Slovyansk and advance east of Bakhmut in the east of Ukraine.

Some of Russia’s battalion tactical groups, initially made up of approximately 600–800 officers and soldiers, now have as few as 10 to 15 troops remaining.

They complained of poor equipment and an overall lack of personnel. 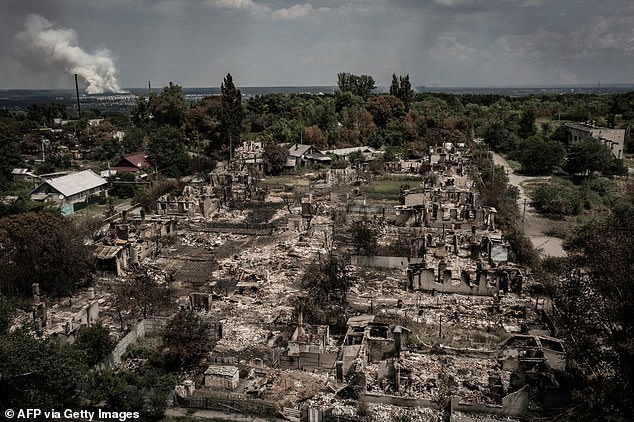 The cities of Severodonetsk and Lysychansk, which are separated by a river, have been targeted for weeks as the last areas still under Ukrainian control in the eastern Lugansk region 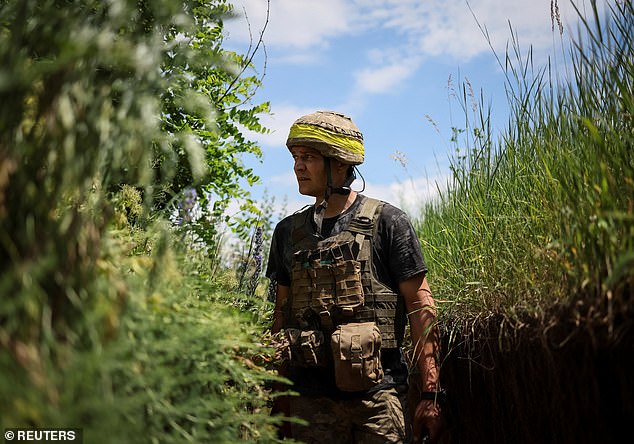 Georgia Toffolo puts on a glamorous display in a plunging gown as she attends...

Girlfriend in China finds out missing boyfriend is back home in Norwich with wife...

Hairy Bikers star Dave Myers, 64, appears in video for first time since having...