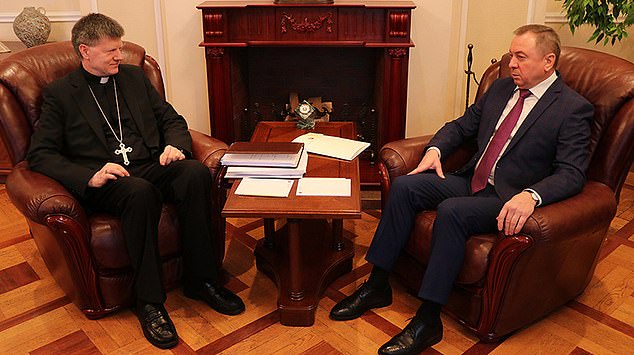 By Will Stewart for MailOnline

The foreign minister of Russian ally Belarus died suddenly today at the age of 64, it was announced in Minsk.

Vladimir Makei was seen as the only main channel of communication to the West in dictator Alexander Lukashenko‘s hardline pro-Moscow regime.

His sudden death came the day after he met with the Pope’s envoy Ante Jozić amid speculation they were discussing a secret peace plan over the war in Ukraine.

Lavrov’s spokeswoman said Russia was ‘shocked’ at his passing.

No cause of death was given – but several sources speculated that his demise could be suspicious.

Makei was described as ‘healthy’.

He was seen as eyeing the Belarus presidency in the event of Lukashenko quitting – and was a former chief of staff to the tyrant.

He had been trained in the Soviet GRU – the military intelligence agency – and had a reputation as Lukashenko’s ‘grey cardinal’. 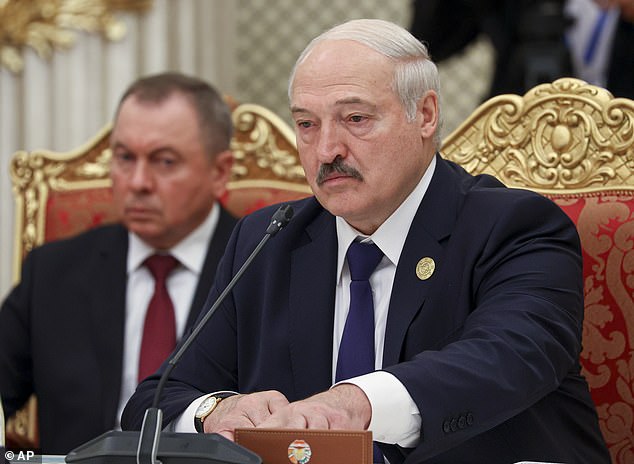 Vladimir Makei (left) and Belarusian President Alexander Lukashenko (right) are pictured in September, 2021. Makei was seen as eyeing the Belarus presidency in the event of Lukashenko quitting 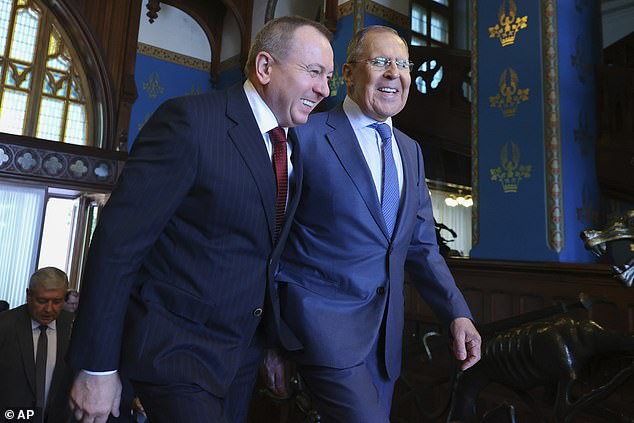 Vladimir Makei (left) was due tomorrow and Monday to host Vladimir Putin’s foreign minister Sergei Lavrov (right) in Minsk. The two are pictured in June 2021

The pro-war Russian Telegram channel Mardan posted: ‘Strange death. Just in time. Just yesterday he discussed a peace plan with the envoy of the Pope.’

Narrative channel said: ‘Makei was Lukashenko’s main channel of communication with the West.

‘A career intelligence officer, Makei was closely associated with Austrian intelligence and the Austrian elites. Makei provided a liberal trend.

‘He often carried out delicate assignments from the Kremlin – and helped build special contacts between Moscow and the Austrians.

‘At the same time, he was not a supporter of the Kremlin.’

Another channel Legitimniy stated: ‘He was the main covert lobbyist for Western interests in Minsk.

‘Is it a coincidence? Or did someone take him out because he didn’t deliver on what he promised?

‘Or, on the contrary, was he suspected of ‘draining information’?’

The channel went on: ‘Makei’s main dream was the [Belarus] presidency.’ 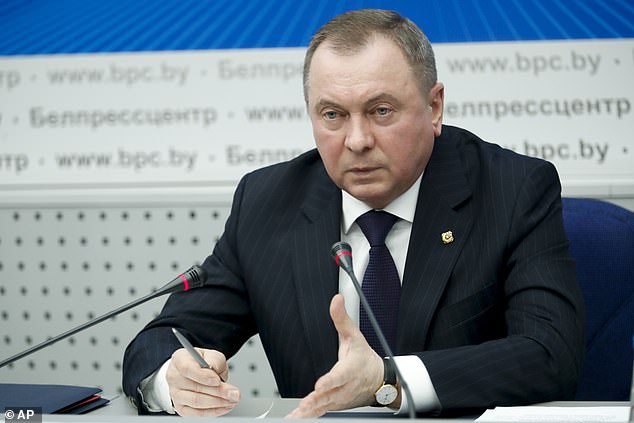 No cause of death was given – but several sources speculated that his demise could be suspicious. Mr Makei is pictured at a news conference in Kyiv in February 2022

He was seen as having links to exiled opposition leader Sviatlana Tsikhanouskaya.

Makei was seen as ‘a master of intrigue’ who Lukashenko ‘admired and at the same time feared’.

He was a ‘most talented, cunning and dangerous politician’.

HVS channel said Makei was a politician ‘in whose natural death one can never believe’.

He was seen by some as pro-Western until the outbreak of anti-Lukashenko protests following a rigged election, after which he became a loyalist opposing the West.

Others claimed he kept an independent foreign policy alive, and did not give up contacts with the West.

While Lukashenko is Putin’s closest international ally, the Kremlin has remained concerned that Belarus has failed to fully sign up to his war in Ukraine – even though Moscow has troops stationed in Belarus. 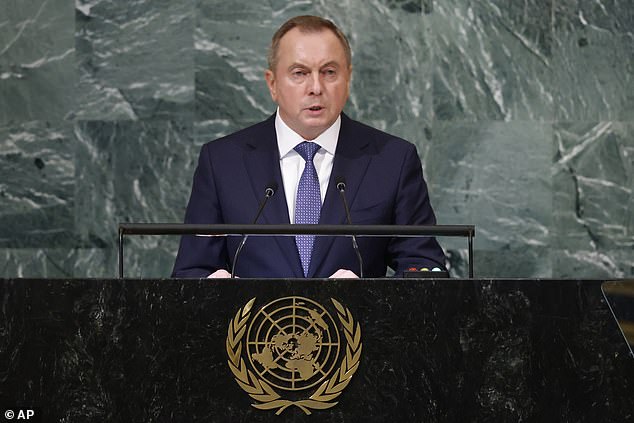 Makei was seen as ‘a master of intrigue’ who Lukashenko ‘admired and at the same time feared’. He is pictured addressing the 77th session of the United Nations General Assembly in September 2022

There were also concerns that Lukashenko – despite being a pariah – was seeking to do a secret deal with the West in the event of Putin’s being toppled.

The Belarus Foreign Ministry did not recognise the Donetsk and Luhansk ‘people’s republics’ – sparking anger in Moscow.

Last week Makei attended the CSTO security session in Armenia, along with Putin and other senior Russian figures.

Makei warned of threats from NATO.

‘We are shocked by the reports of the death of the Head of the Ministry of Foreign Affairs of the Republic of Belarus,’ said Russian foreign ministry spokeswoman Maria Zakharova.

‘Official condolences will be published soon.’

Chris Ford, the first player to score a 3-pointer in the NBA, has died...