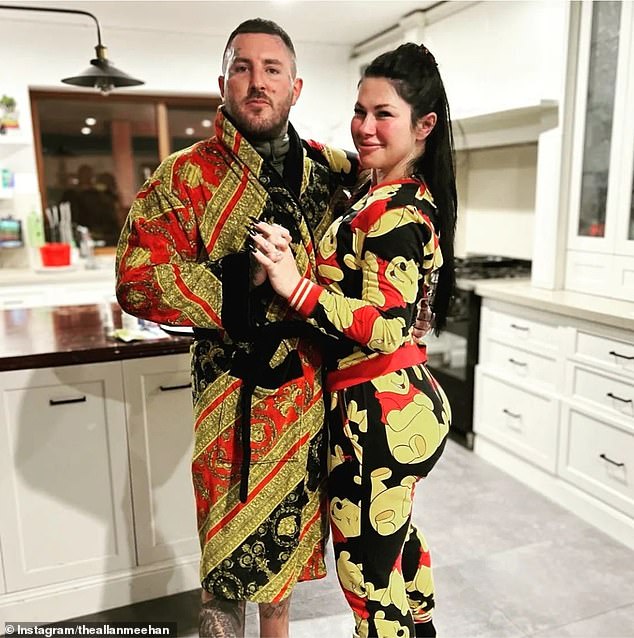 The national Comancheros bikie boss has been slapped with extraordinary crime orders to crack down on his lavish lifestyle and show motorcycle gangs they’re not ‘beyond the law’.

Flamboyant motorcycle gang leader Allan Meehan – known as the ‘Bathrobe bikie’ for his love of wearing dressing gowns – will have ‘some of the strictest orders ever placed on a person in NSW‘ covering everything from his movements to bank accounts and phone use.

He will also be banned from wearing club colours, although it is understood he will still be able to don his garish Comanchero coloured Versace bathrobe.

Meehan is banned from wearing club colours, although he should still be able to don his garish Comanchero coloured Versace bathrobe . Pictured with wife Elise in the designer gear 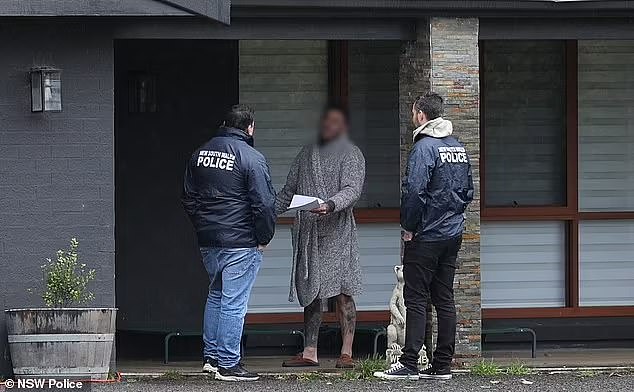 The NSW Police Commissioner took out a summons against Meehan in the Supreme Court on several grounds including that he is a member of the Comanchero OMCG ‘which are know to participate in joint criminal enterprises … to undertake drug trafficking activities as well as criminal acts of violence’.

The other grounds are that Meehan has been convicted of possessing  an unauthorised pistol.

Despite a hearing being set down for two days, the Comanchero ‘Commander’ did not contest the order being made.

Dubbed the ‘Bathrobe Bikie’ after posting Instagram photos of himself in a Versace dressing gown as well as images of designer jewellery, clothing and a custom gold bike, Meehan appeared briefly in court on Monday and the order was confirmed by Acting Justice Monika Schmidt on Tuesday.

The order restricts his ownership of firearms, the cars he drives and who he associates with. It also subjects his phones, computers, and any other device, plus his bank accounts, to serious scrutiny.

Furthermore, it prohibits Meehan from using an alias, changing his address without notification, and restricts his use of phones, emails and online accounts.

He is not allowed have more than $10,000 in cash at any one time or wear his Comanchero club ‘colours’ or patches with the gang’s logo. 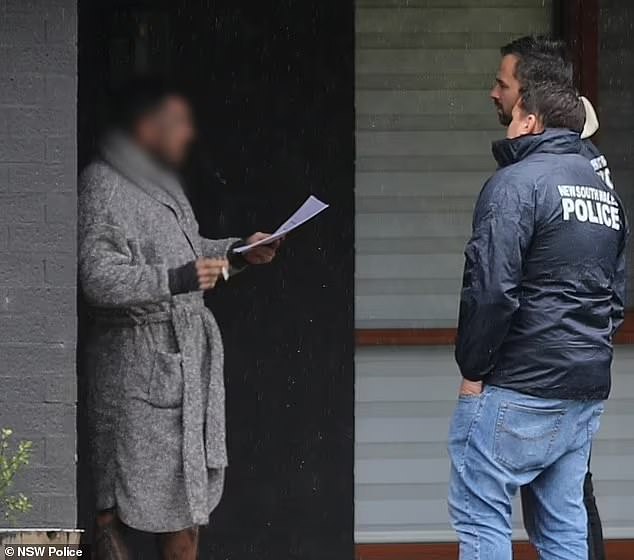 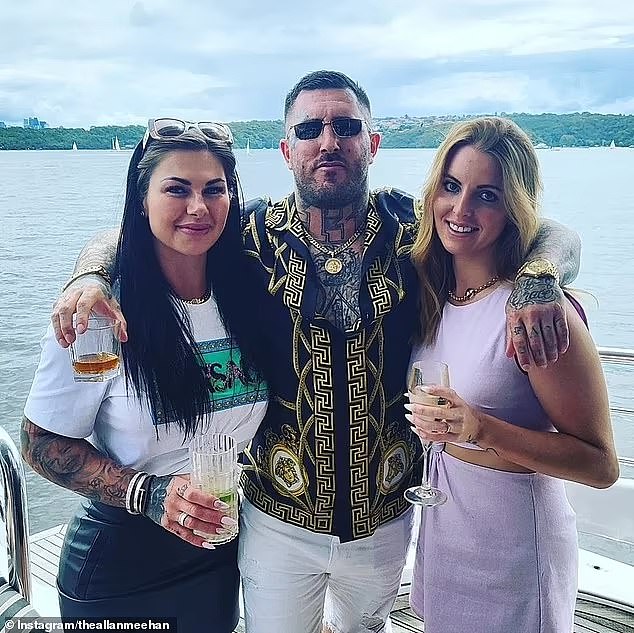 The luxury loving bikie boss is restricted from having more than $10,000 cash at any one time and can not use aliases or having online accounts under different names

Evidence that went unchallenged in the order application which came from experienced bikie gang detectives were that Comanchero bikies ‘consider themselves to be beyond the law’, ‘pursue offences involving violence, firearms and other weapons and drugs’ and will sometimes ‘violently defend’ their club patches or colours.

Police submissions to the court also said Comanchero bikies have ‘complex … hierarchies governed by written and unwritten rules’ which ‘includes an expectation that they will commit violent acts’.

Comanchero bikies acted to ‘protect and enhance their organisations’ reputation by use of serious violence, including when members who leave are subjected to penalties including fines, extortion, property theft and violence.

Justice Schmidt ruled that the NSW Police Commissioner had ‘led uncontested evidence and advanced largely unchallenged submissions to persuade the Court that the consent orders should be made.

‘Mr Meehan’s position was that the evidence and the parties submissions should lead the Court to exercise its discretion to make the orders agreed.’ 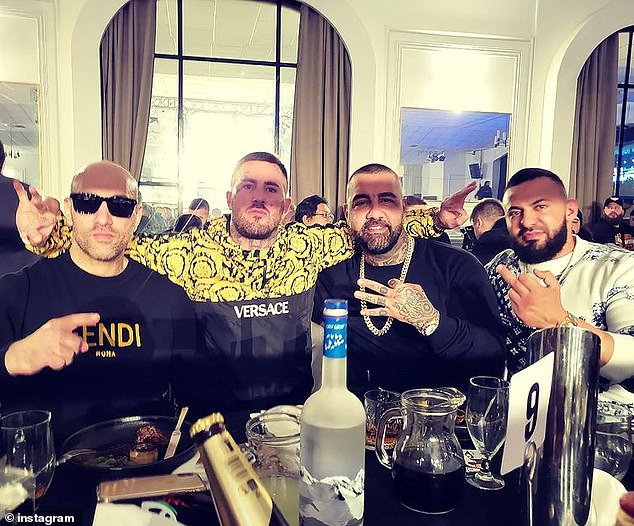 Meehan was captured on police video in July being served by detectives at his Yerrinbool home in the NSW Southern Highlands with a notice of intention to file the Serious Crime Prevention Order (SCPO).

SCPOs were introduced in 2016 to crack down on organised crime and Meehan is one of several Comanchero and other senior bikies to have had one taken out against them.

The visit by detectives came after Meehan’s appointment as club boss, with his announcing his elevation to Comanchero national president with a photo showing a patch on his leather vest with his new title in an Instagram post saying ‘U cant see the eyes of the demon, until him come a callin’.

After the papers were served on Meehan, Criminal Groups Squad Commander Superintendent Grant Taylor said Meehan had ‘become a primary target of the NSW Police Force’.

‘We want to send a clear message. If you’re going to be the national president of the Comanchero, this is what you can expect,’ Supt Taylor said at the time.

Last month, NSW police froze the bank accounts of Meehan and other prominent Comanchero members in a crackdown by detectives as a direct result of their ‘flaunting their wealth and possessions’.

Sources told Daily Mail Australia in October that Comanchero bikies were warned their accounts would be frozen so that police could search for evidence of proceeds of crime contributing to the purchase of high-end goods.

The squad’s commander has also issued a warning to young bikie recruits to not be fooled by promises of luxury life, and images on social media by gang bosses of ‘prosperity and success’ – as it’s all a false illusion. 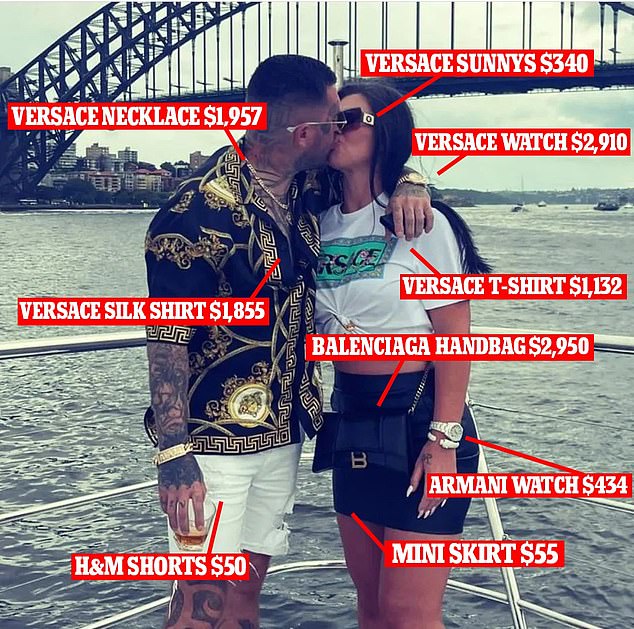 A photo of Meehan and wife Elise on a boat near the Sydney Harbour Bridge dressed casually shows them in designer wear and jewellery by Versace, Balenciaga and Armani worth around $12,000 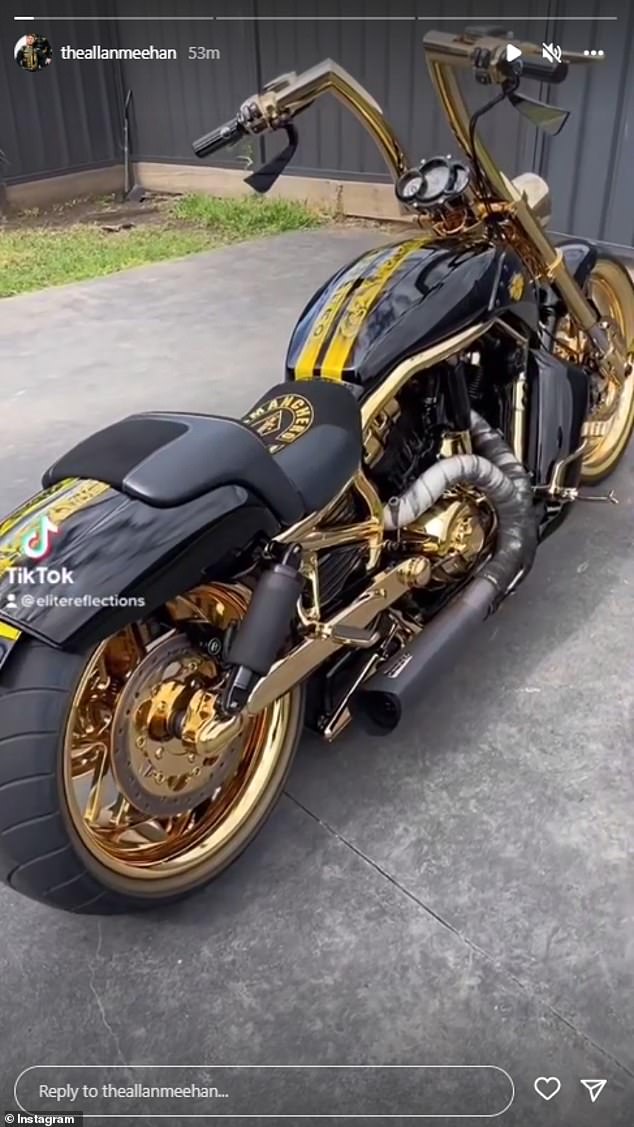 This is after Meehan posted photos of himself and associates decked out in designer clothes and jewellery celebrating at a fancy Melbourne restaurant celebrating the survival of Tarek Zahed, the so-called ‘Balenciaga bikie’  now charged with murder.

The NSW Police Criminal Groups Squad has forensically examined the recent displays on social media accounts of bikies like Meehan.

‘This basically says to law enforcement: ‘look at me and the money I am making… focus your attention on me and catch me if you can’. 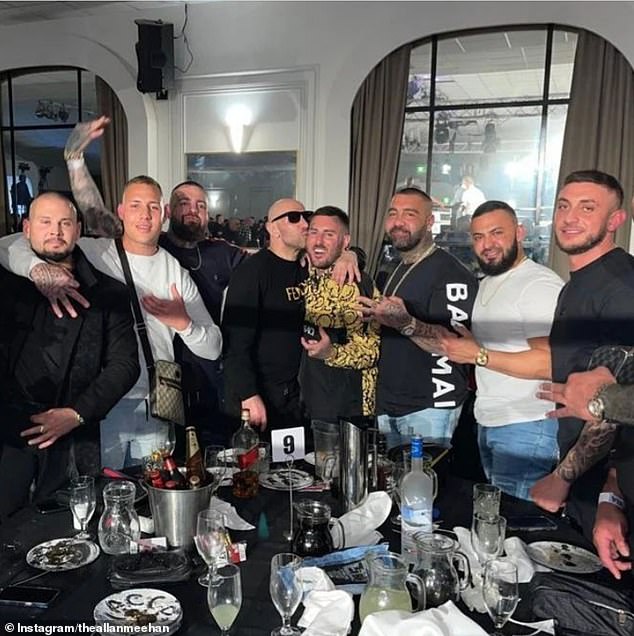 Comanchero boss Allan Meehan (centre) is kissed by Tarek Zahed (kissing him) and celebrating with star patch over Jesse Vella (hand in air) and others at a fancy Melbourne restaurant in August. Zahed was arrested seven days later

In August, he posted on TikTok a video of a gold custom-built imported collector’s special Harley Davidson V-Rod motorcycle in club colours worth up to $100,000.

A shot of himself and wife Elise on a boat near the Sydney Harbour Bridge dressed casually shows them in designer wear and jewellery by Versace, Balenciaga and Armani worth around $12,000.

Meehan, who Daily Mail Australia understands went to Queensland after his bank accounts were frozen, is so keen on Versace, he buys his teenage daughter items of clothing from the designer range. 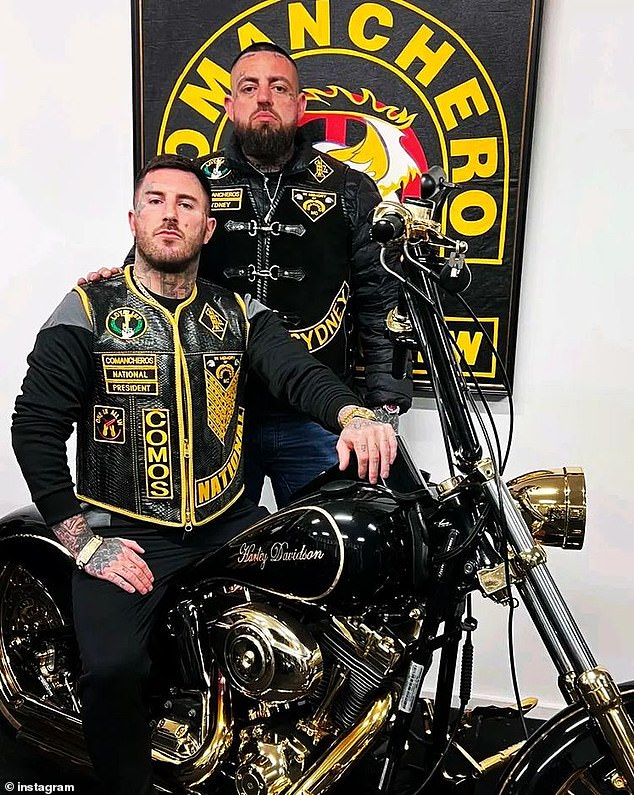 Allan Meehan lured his old Rebels mate Jesse Vella to the Comanchero in June and the two bikies posed together, but both have now had their bank accounts frozen as police probe their financial activities

One of Meehan’s Instagram followers  posted that he should ‘charge the media they keep using your photos’ with the bikie boss replying he’d demand ‘1MILLION EUROS’.