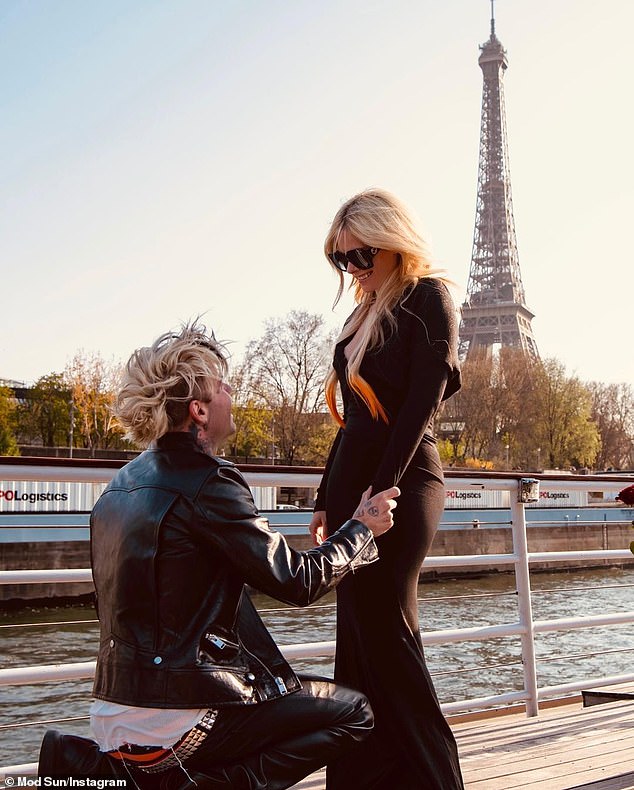 The 35-year-old musician confirmed the news on Instagram on Thursday after she was seen flashing a very large diamond ring on her wedding finger in Los Angeles on Tuesday.

Mod Sun shared an image where he was down on one knee in front of Avril while they were in Paris as he added a gushy note for his future wife.

Be my wife: Avril Lavigne has become engaged to singer Mod Sun. The 35-year-ld musician confirmed the news on Instagram on Thursday after she was seen flashing a very large diamond ring on her wedding finger on Tuesday

‘The day we met I knew you were the one,’ began the star, whose real name is Derek Ryan Smith. ‘Together forever til our days are done.

‘I had a dream where I proposed in Paris. I pulled out a ring + asked you to wear it. I was on one knee as I looked in your eyes. You’re too beautiful for my words to describe. I grabbed your hand + took one last breath… I said “will you marry me?” + she said “yes.”‘

In the image she has on all black with her orange-dipped hair over her shoulders while looking down on Mod Sun, who is on one knee. Behind them is the Eiffel Tower in Paris as they stand by the Seine River. He wore a black leather jacket with matching slacks.

Avril was seen with the ring on when she headed to a music studio in Los Angeles with her entourage on Tuesday. 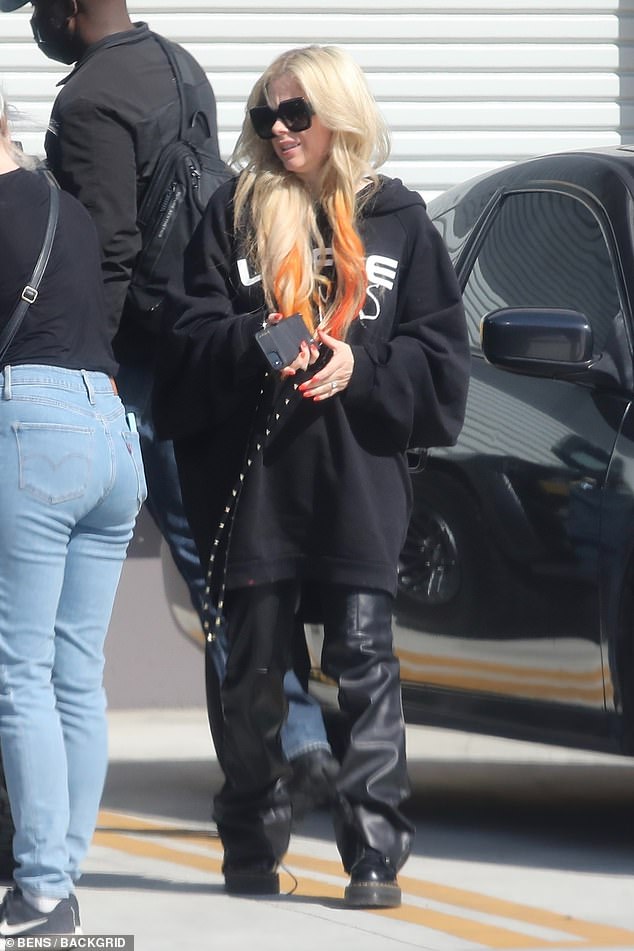 Bling day: Lavigne was showing off a very large diamond ring on her wedding finger when she headed to a music studio in Los Angeles with her entourage on Tuesday

The 37-year-old Sk8ter Boi singer has been dating Minnesota-born musician Mod Sun for the past year.

This will be a first marriage for Mod Sun. In 2019 he and Bella Thorne hinted they had a secret wedding, but it was not official.

Avril and Mod Sun met when working on the song and co-starring in the video for Flames, which debuted in February 2021. 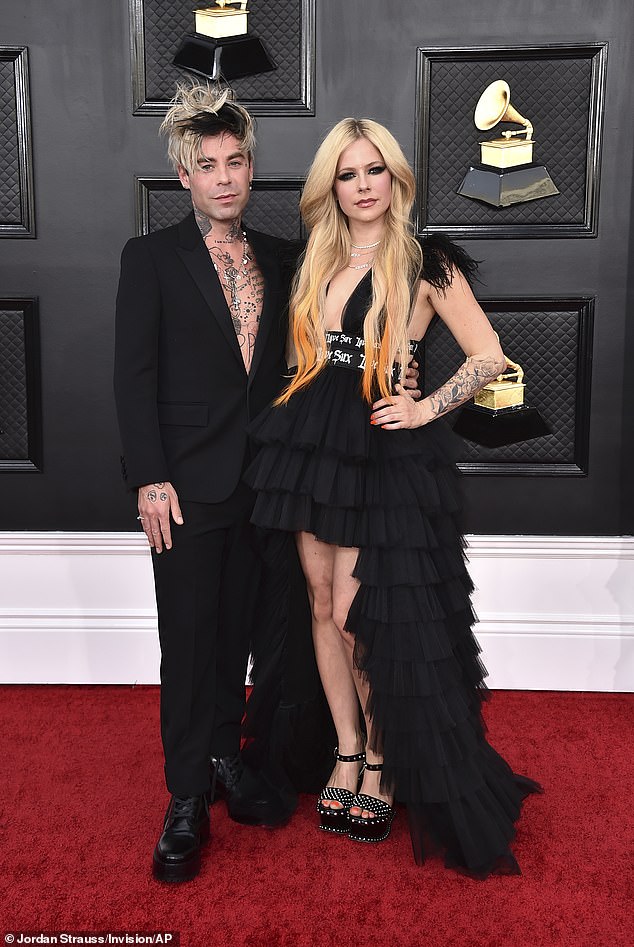 No ring here: Avril was not wearing the large diamond as she attended the Grammys over the weekend so the ring does seem new 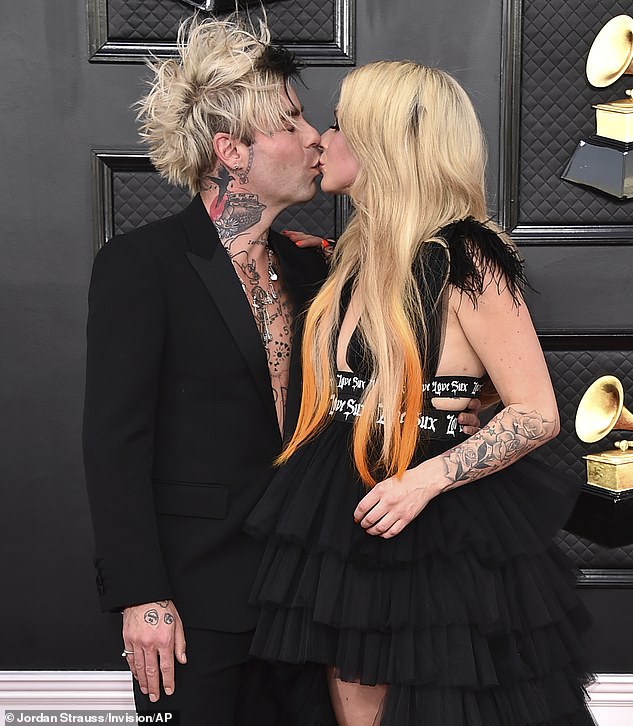 They are so happy! The power couple kissed each other on the lips at the Sin City event

And he became so serious about the crooner that he had her name tattooed on his neck only months after meeting.

Avril was not wearing the large diamond as she attended the Grammys over the weekend with Mod.

The power couple put on a loved-up display as they kissed while posing for photographers.

The Canadian songstress – who was a presenter at the ceremony – stunned in a plunging, short in the front and long in the back, ruffled black gown with feathered shoulders. 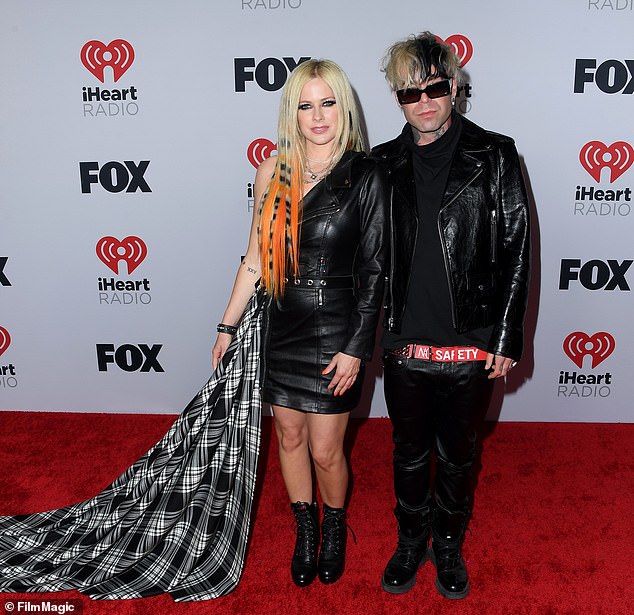 No ring here either: And her left hand was bare when she posed with Mod at the 2022 iHeartRadio Music Awards at Shrine Auditorium and Expo Hall in LA on March 22

Avril opened up about her relationship while speaking with E! News‘ Laverne Cox on the red carpet, saying that before she started dating Mod she was ‘over’ relationships.

‘I was, like, over it. I was like, “I need a break from relationships, I’m gonna check out.” That didn’t last very long, a couple days then I got myself a boyfriend,’ she revealed.

The singer continued, ‘I was like, “I need my independence back, I need a hot minute.” And then, like, two days later I fell in love. That’s how it goes for me.’ 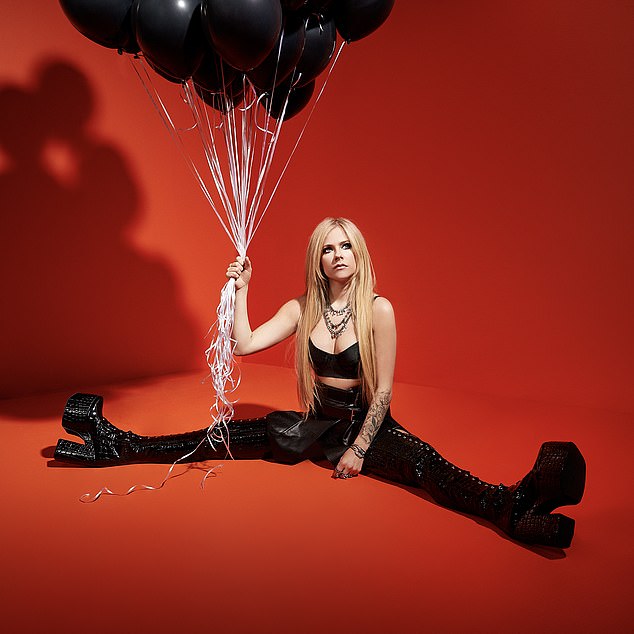 New tunes: Lavigne’s new album Love Sux featuring Bite Me, Love It When You Hate Me and Bois Lie came out in February

In March it was announced Avril will be joining Machine Gun Kelly on his 52-date Mainstream Sellout Tour.

The North American leg begins in Austin, Texas on June 8, with support from Blackbear and iann dior.

Other friends joining him on select dates include  WILLOW, Travis Barker, and PVRIS.

The first stint will wrap with a homecoming show in Cleveland, Ohio on August 13. After a few weeks’ break, he will head to Europe to play Cologne, Germany on September 17.

Former Google engineer blames the internet’s failures for why search has had an ‘overall...

Frogmore Creek: Inside the Hobart winery adored by Aussie celebrities

BAFTA TV AWARDS 2022: Tess Daly and Janette Manrara stand out from the crowd...