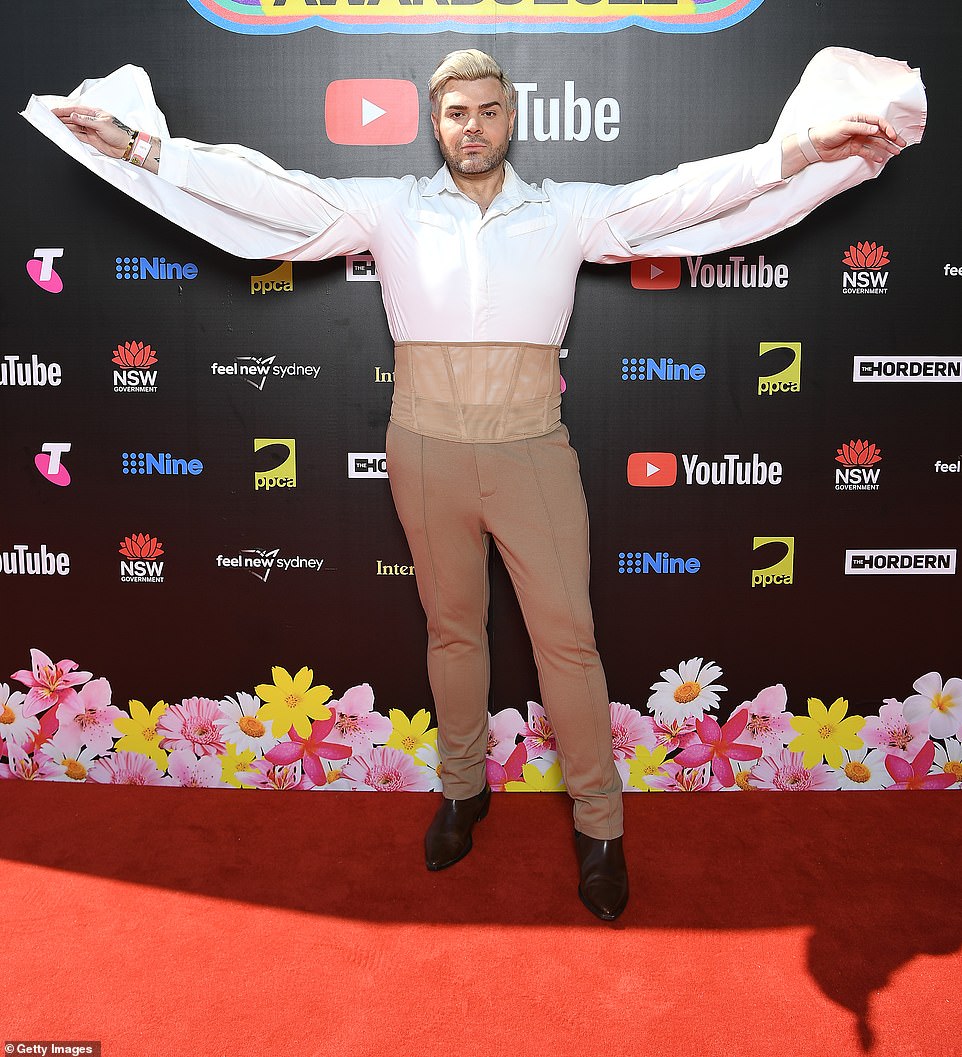 The who’s who of the Australian music industry are set to light up Sydney‘s Hordern Pavilion tonight to celebrate 12 months of fresh beats at the 2022 ARIA Awards.

And while the focus is on the music it also gives artists the opportunity to stun on the red carpet – with some missing the beat altogether proving even industry royalty don’t always hit the high notes.

Amarni, Eves Karydas, and TV host Justin Hill all turned up slightly off key – with their looks landing them on the worst dressed list for the industry’s most important night of the year. 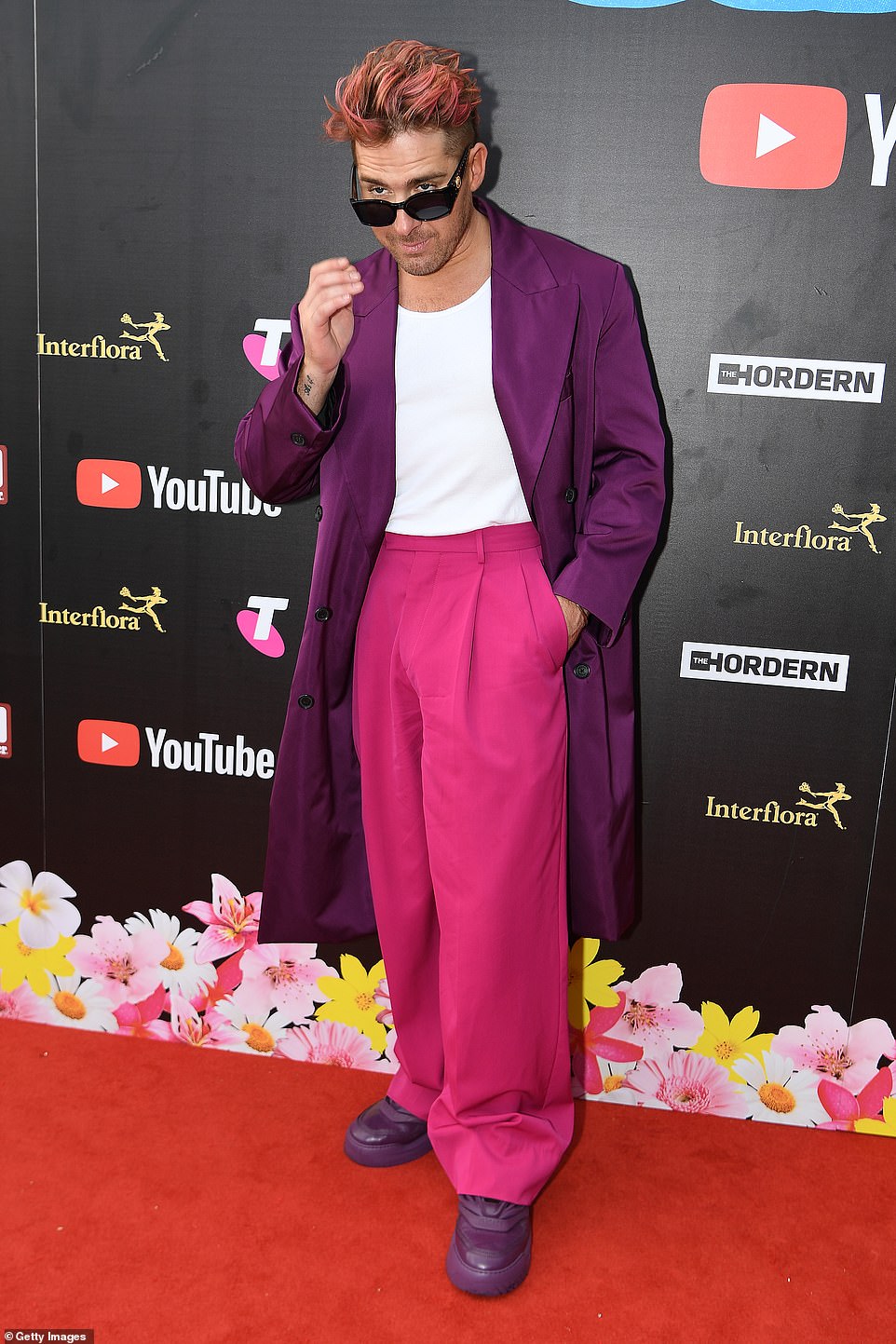 Justin was the first act to fall completely flat on Thursday, confusing onlookers with his fish-net waistband, ‘wings’ and nude pants.

The music show host, who fronts The Loop, appeared pleased with his outfit choice as he flapped his arms on the red carpet to show off the second set of open sleeves.

Amarni found herself on top of the list with a very awkward ensemble which made her resemble some kind of fan-fiction red riding hood.

However the singer looked to be in love with the outfit as she posed on the red carpet showing off every angle from the waist-high slits at the side of the skirt to the G-string popping out the back. 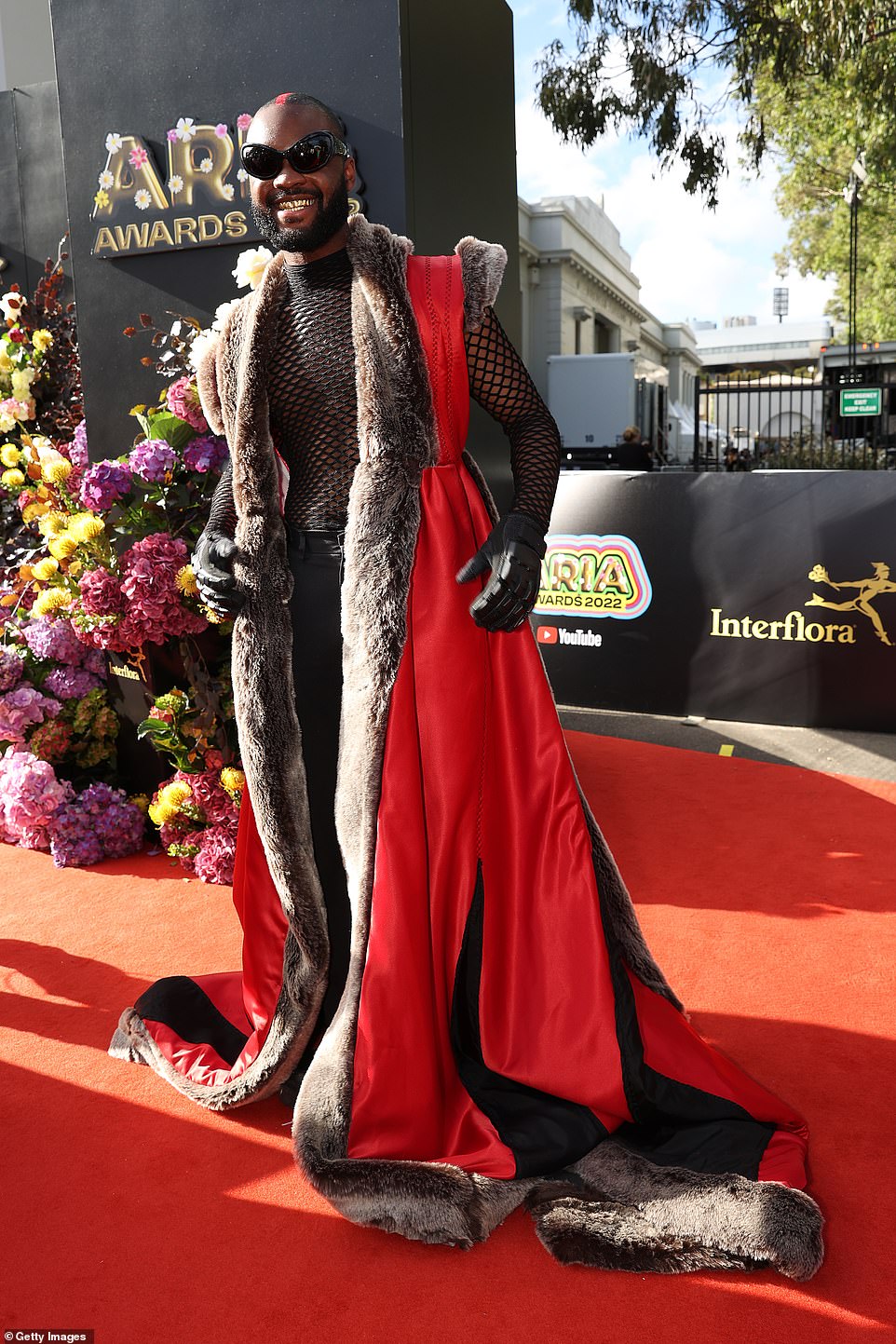 Genesis Owusu looked out of place in his fishnet bodysuit and red, fluffy cape

Hip hop singer Genesis Owusu made a late run at worst dressed when he turned up on the runway in a fishnet bodysuit, hockey gloves and black pants.

Adding further confusion to his outfit by finishing it off with a red fur-lined cape and bug-eyed glasses.

Hugh Sheridan also ended up on top of the worst list with his eye watering pink and purple ensemble. The actor paired the oversized pants and jacket with a tight white t-shirt and purple boots but  simply clashed with the red carpet as he posed for photographers.

Hitmakers Flume confused onlookers with their outfit choices – with one of the musicians choosing to wear short red shorts and a motorbike helmet and the other went as a fleshy razor-toothed blob.

Natalie Imbruglia tried her hand at the over-sized trend, turning up in a bat-winged jacket dress which fell short alongside the other outfits on the runway. 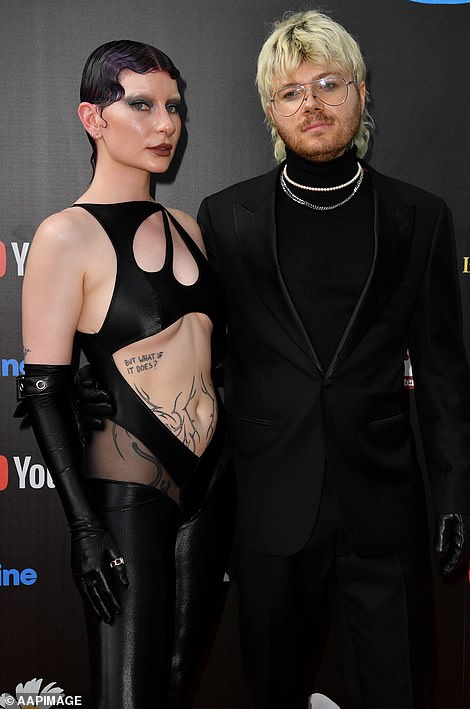 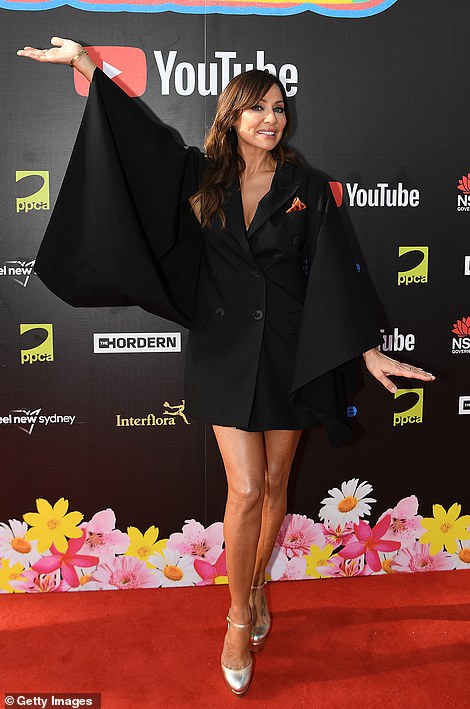 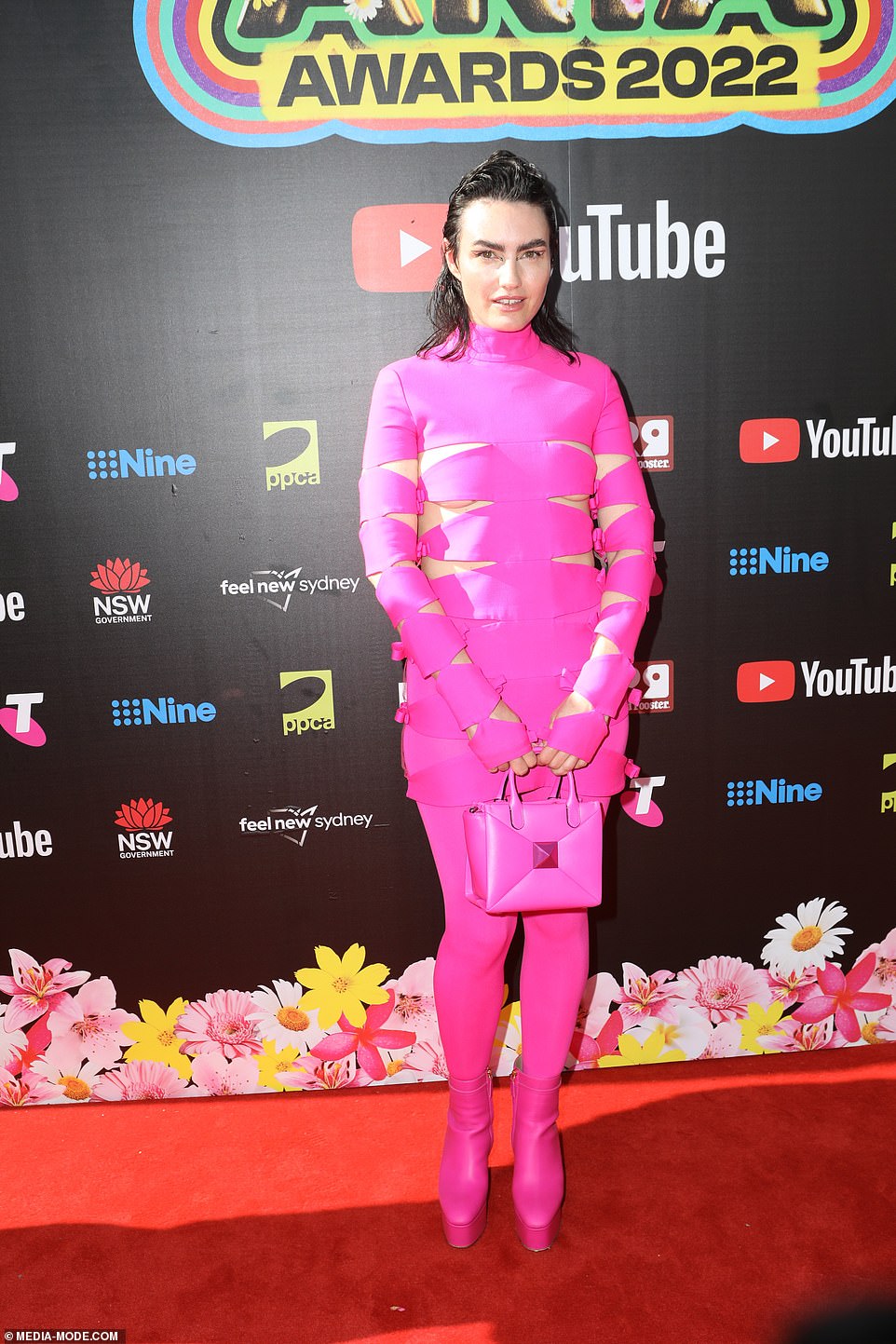 Up and coming pop sensation Nick Ward looked tired as he trudged along the red carpet in a shiny, oversized rainbow shirt and baggy pants.

Sarah Wolf chose a skintight leotard for the occasion however her decision to don the outfit landed her on the worst dressed list.

The singer’s worm tattoo looked like it was wriggling out from beneath her thigh high boots as she posed for the photographers ahead of the awards.

Popstar Isabella Manfredi looked washed out after covering herself in a hot pink outfit in what looked to be an awkward attempt at the Barbie-core trend. 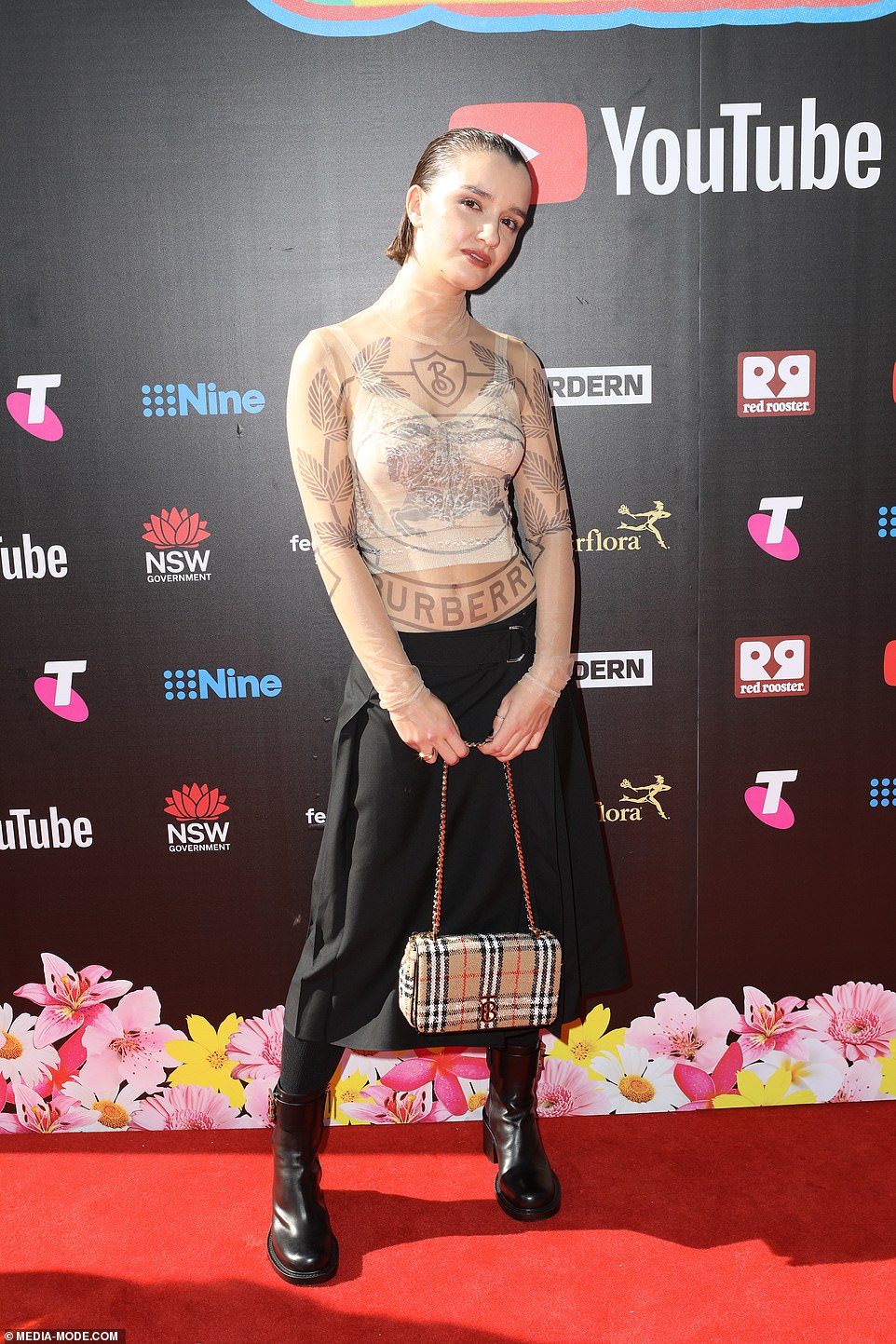 Eves Karydas rocked her way to the top in this Burberry number, which resembeled a fake tattoo sleeve found in two-dollar stores around the country 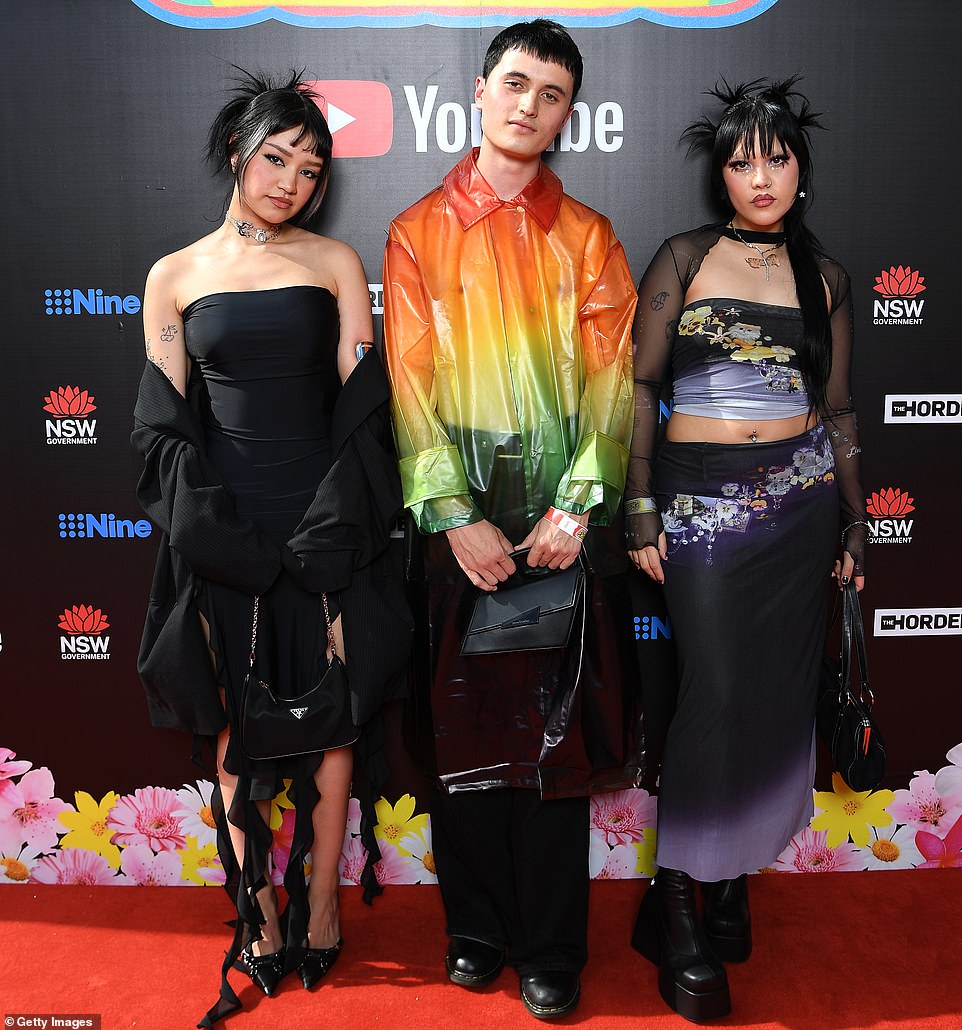 While Reigan Derry, Brittany Hockley and Dami Im, turned heads for all of the right reasons – turning the sound up on the evening’s best looks.

Reigan, who rose to fame after coming 11th in the fourth season of Australian Idol, was the first person to turn heads on the red carpet for the right reasons.

Dressed in a figure-hugging nude and sequin gown the All of the pieces hit maker added floral earrings and wore her hair in a high pony to complete the look. 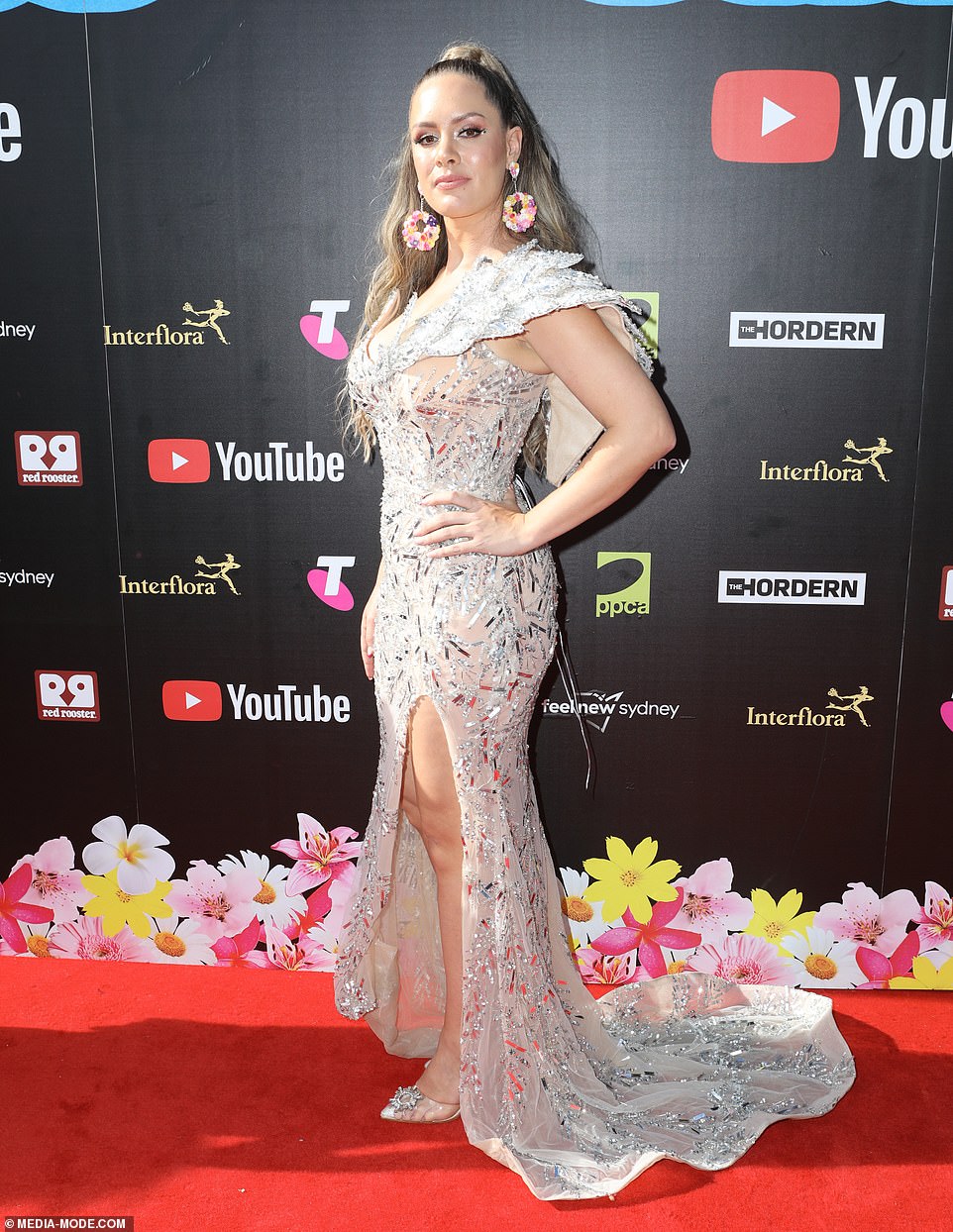 Reigan Derry hogged the spotlight in this incredible sequin gown, pairing it with floral earrings 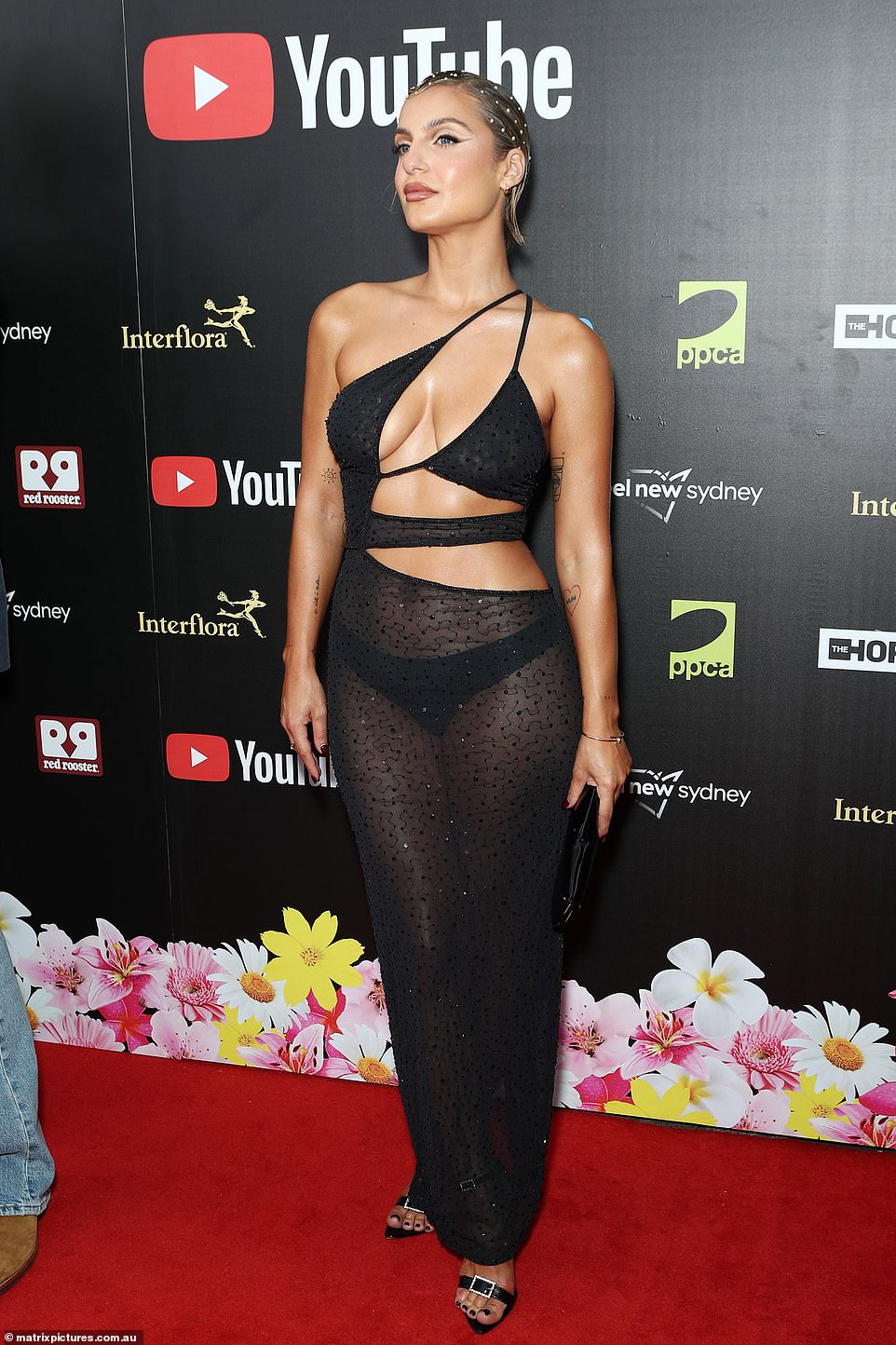 Dom Calarco stunned in this barely-there number, showing off her incredible physique and pairing the outfit with slicked back bejewled locks 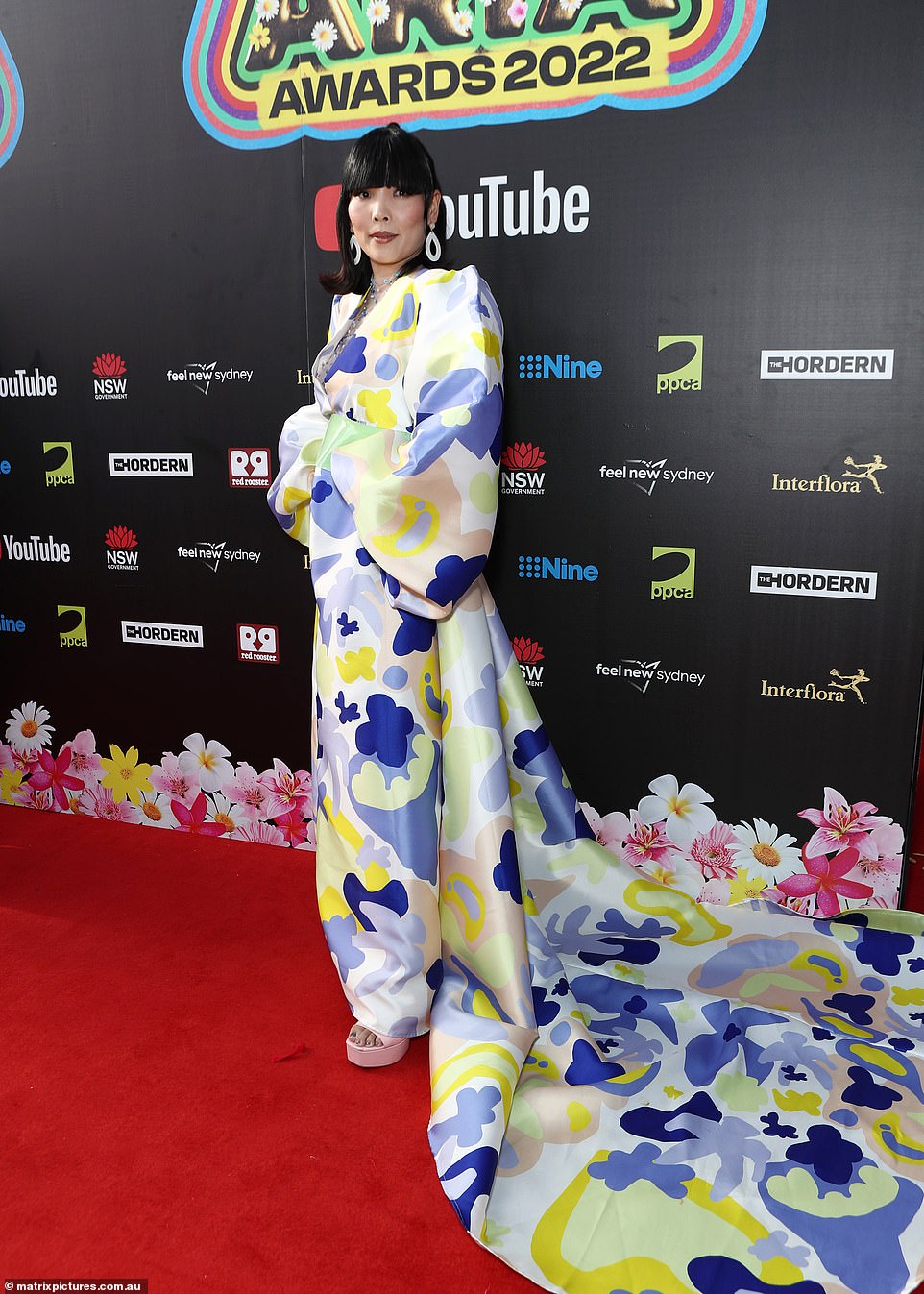 Brittany Hockley, who has been a red-carpet spotlight since she debuted on The Bachelor, was one of the best dressed of the night – gracing the red carpet in a well-fitting pink dress with a statement bow.

The author wore her hair out and matching earring and index finger ring.

Dom Calarco stunned in this barely-there number, showing off her incredible physique and pairing the outfit with slicked back bejewled locks. 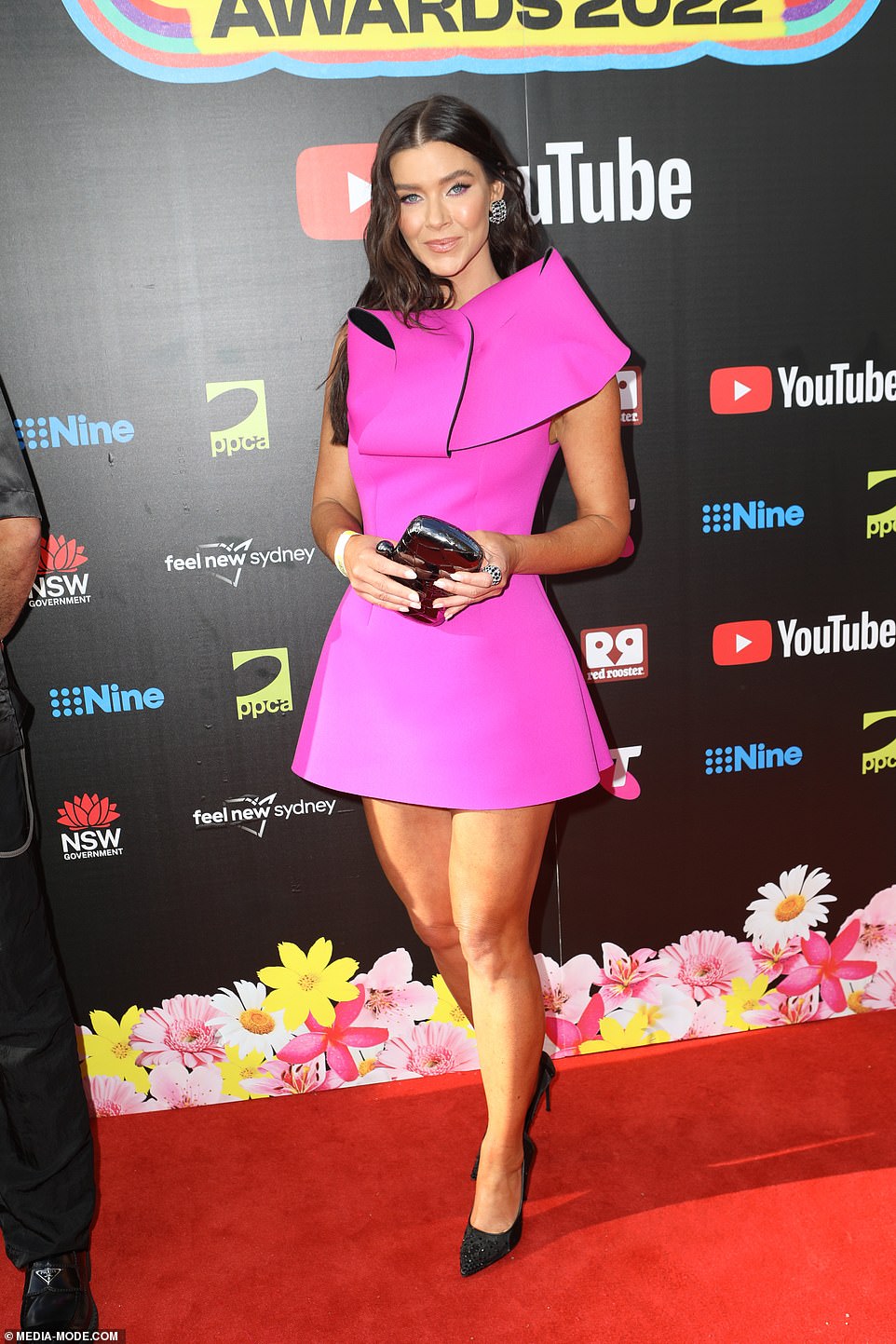 The Married at First Sight star went with a winged eyeliner and black sandals to finish off the incredible look.

Others appeared to melt into the chaos, with their looks dubbed unremarkable or boring.

Emma Watkins, affectionately known as Emma Wiggle, was the first on the red carpet in an unremarkable sequin number, which failed to live up her reputation as a style icon.

Grace Pitts, better known as Graace, who lent her vocals to Hayden James for his platinum selling single “Numb” looked plain in her cut-away dress as she smiled for photographers. 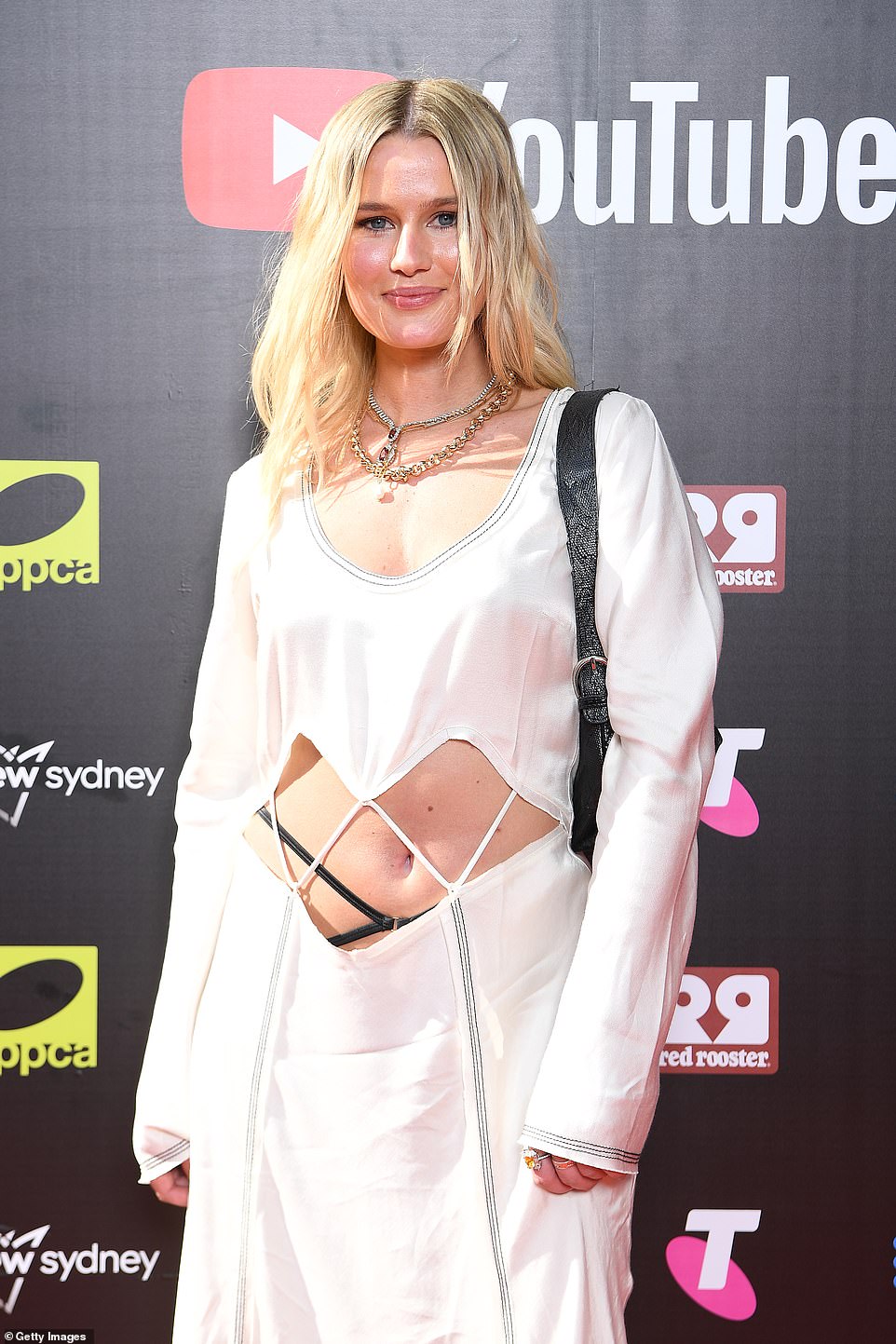 Grace Pitts didn’t make the best or worst dressed list either, after wearing a giant cuttaway dress which somehow dwarfed her figure 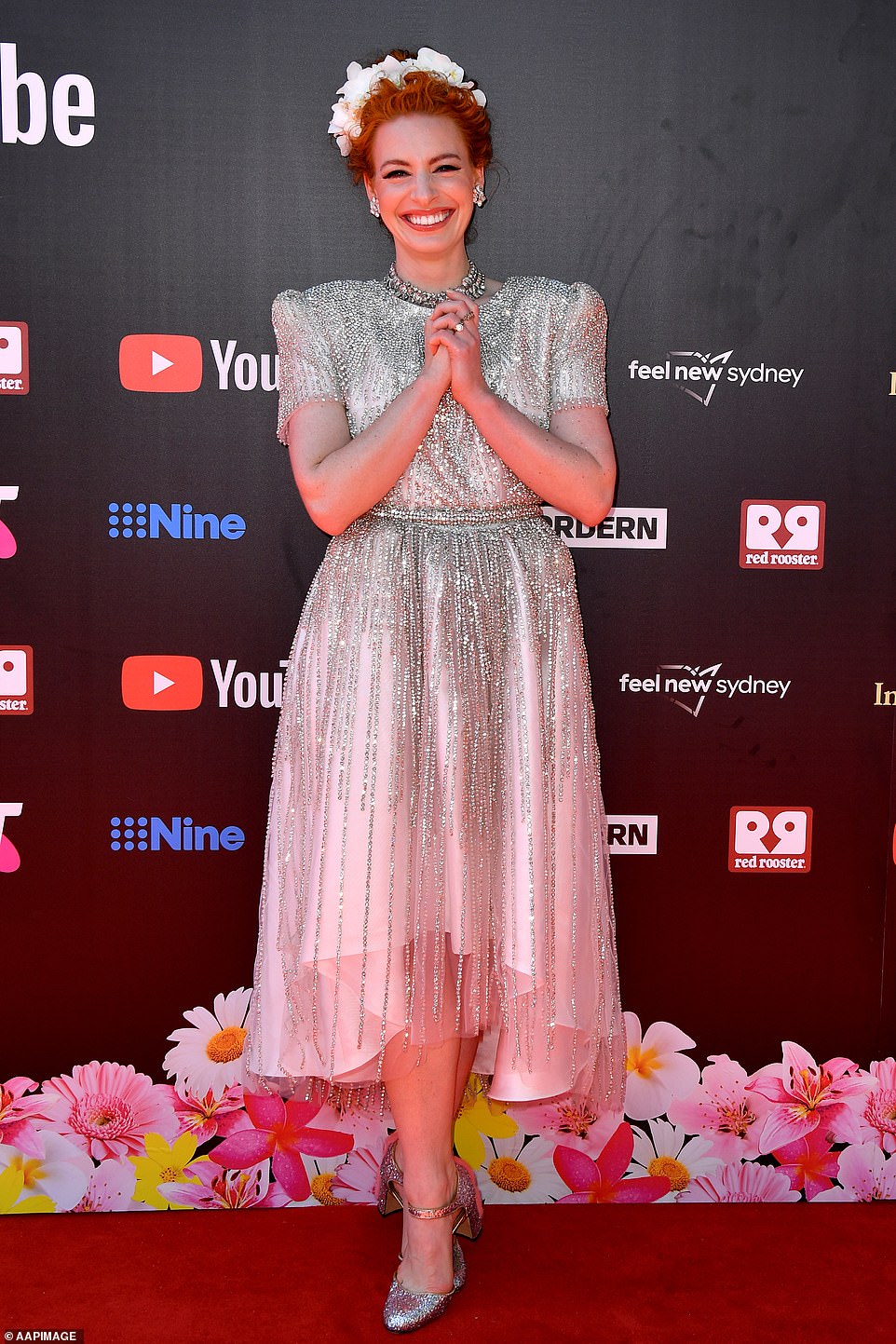 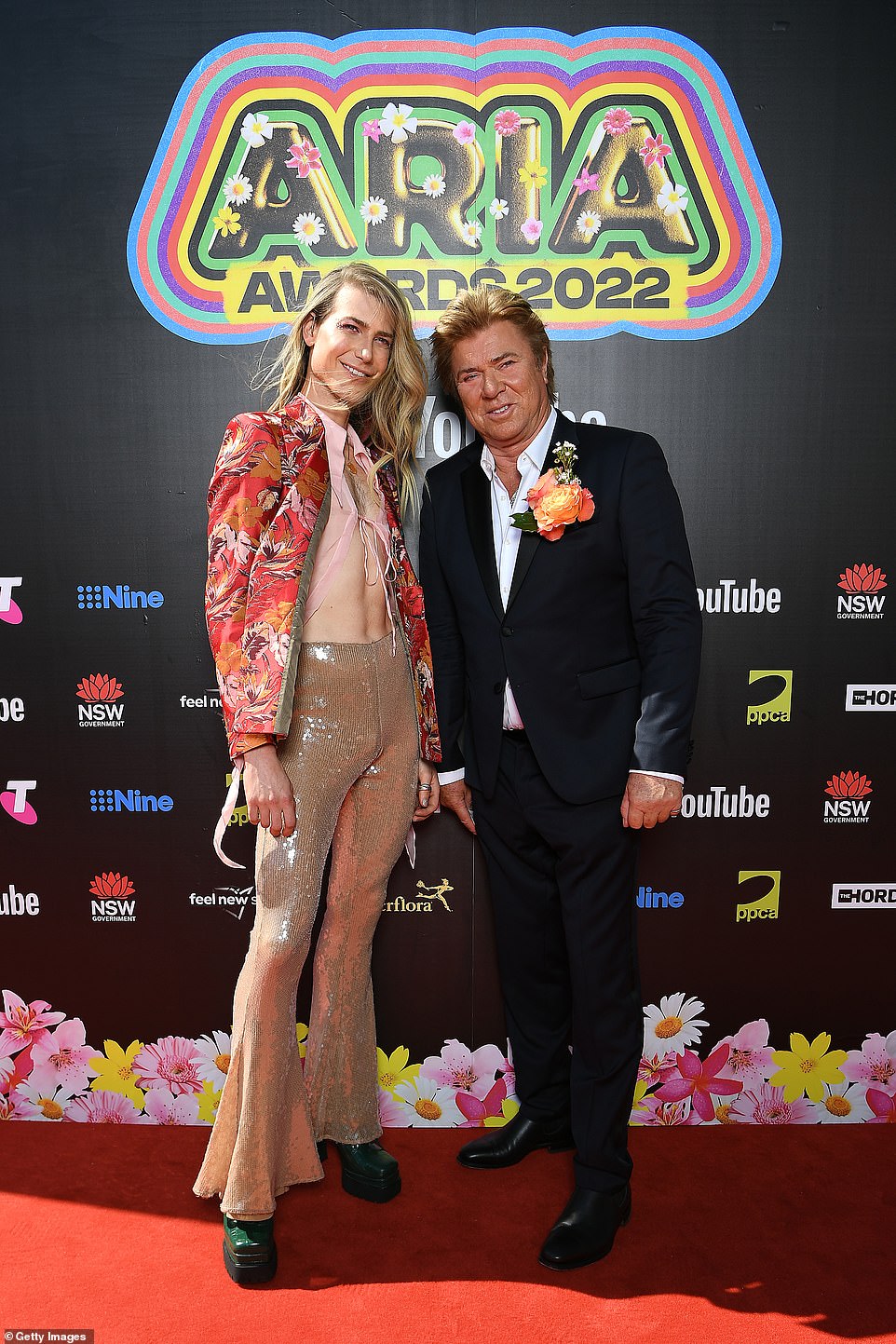 Christian Wilkins, pictured here with dad Richard, also failed to impress with his outfit – though his hair looked lush as it fell around his shoulders 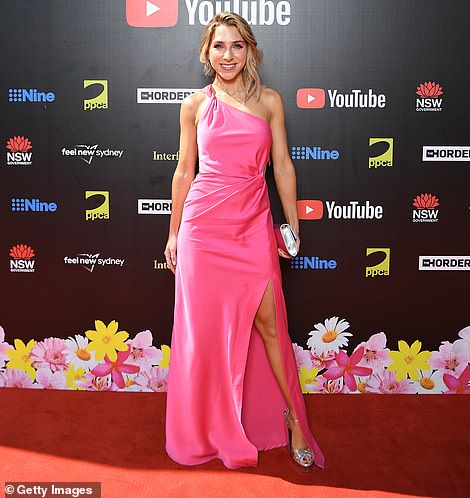 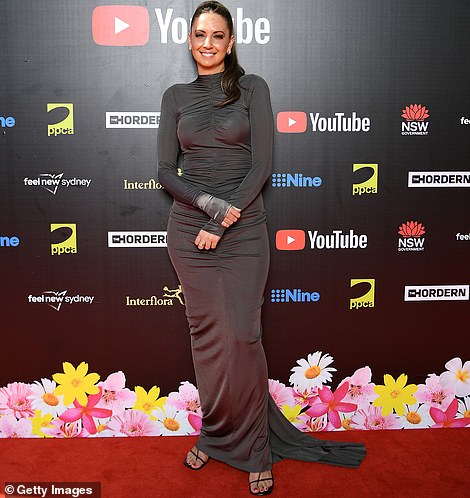 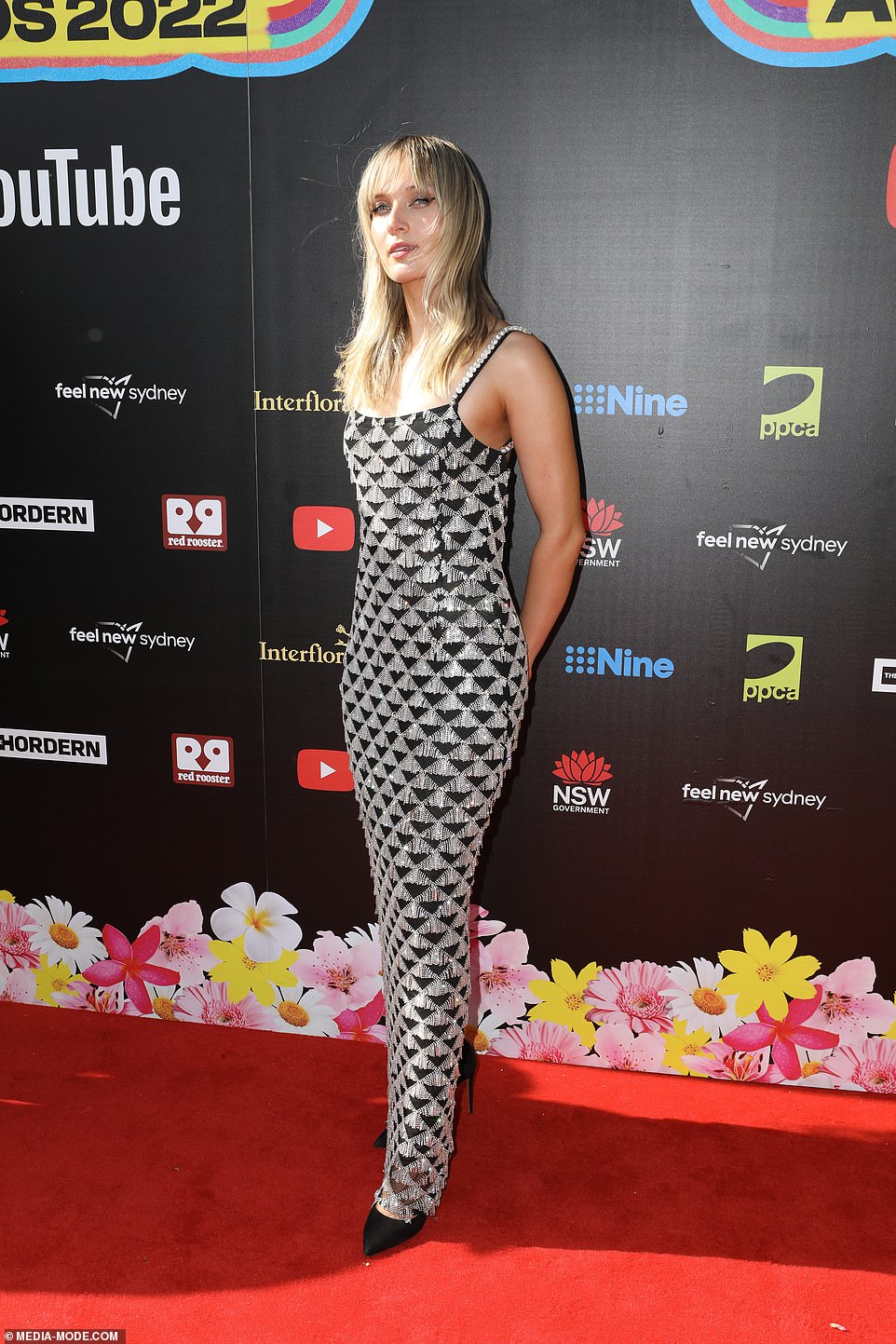 Gretta Ray, the Love Me Right songstress wore a chic silver and black dress, which didn’t quite manage to land her in the best or worst lost

Next was Christian Wilkins, who arrived alongside his dad Richard, dressed in sequin pants and a red jacket with his lush locks falling loosely around his shoulders. And while his outfit definitely had rock star vibes it also failed to land him on the best dressed list.

Channel Nine reporter Britt Cohen dressed in a lovely pink gown in her own take on Barbie fashion while her colleague Brooke Boney chose a safe dark-grey number for the evening.

Nassar Sultan also turned up on the red carpet dressed in tight black jeans, a plain white t-shirt and heavy leather jackets, giving a salute to rock and roll as he paused to be snapped by the cameras. 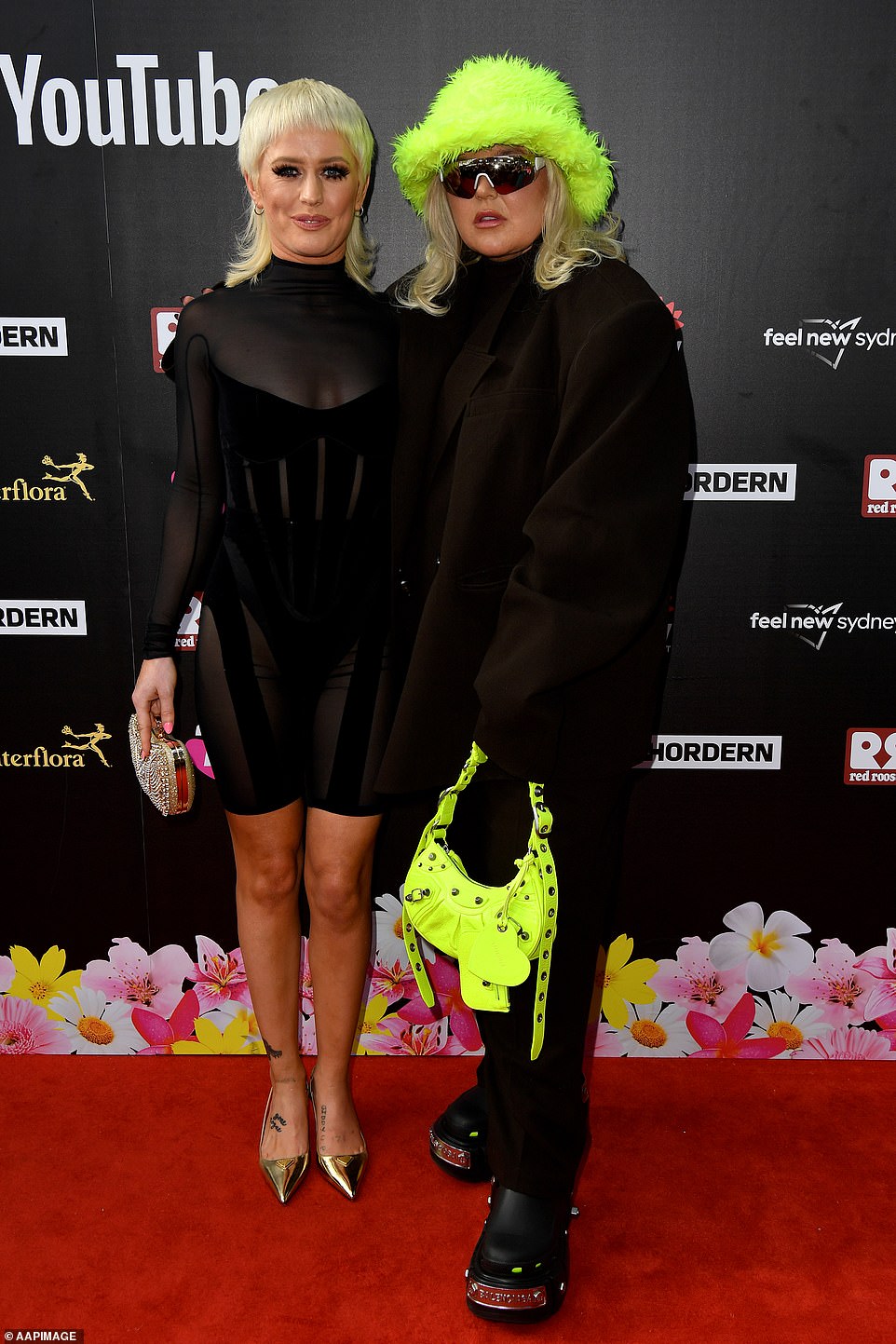 Tones and I wore a black outfit, breaking up the monotony with fluro accessories including a fluffy hat 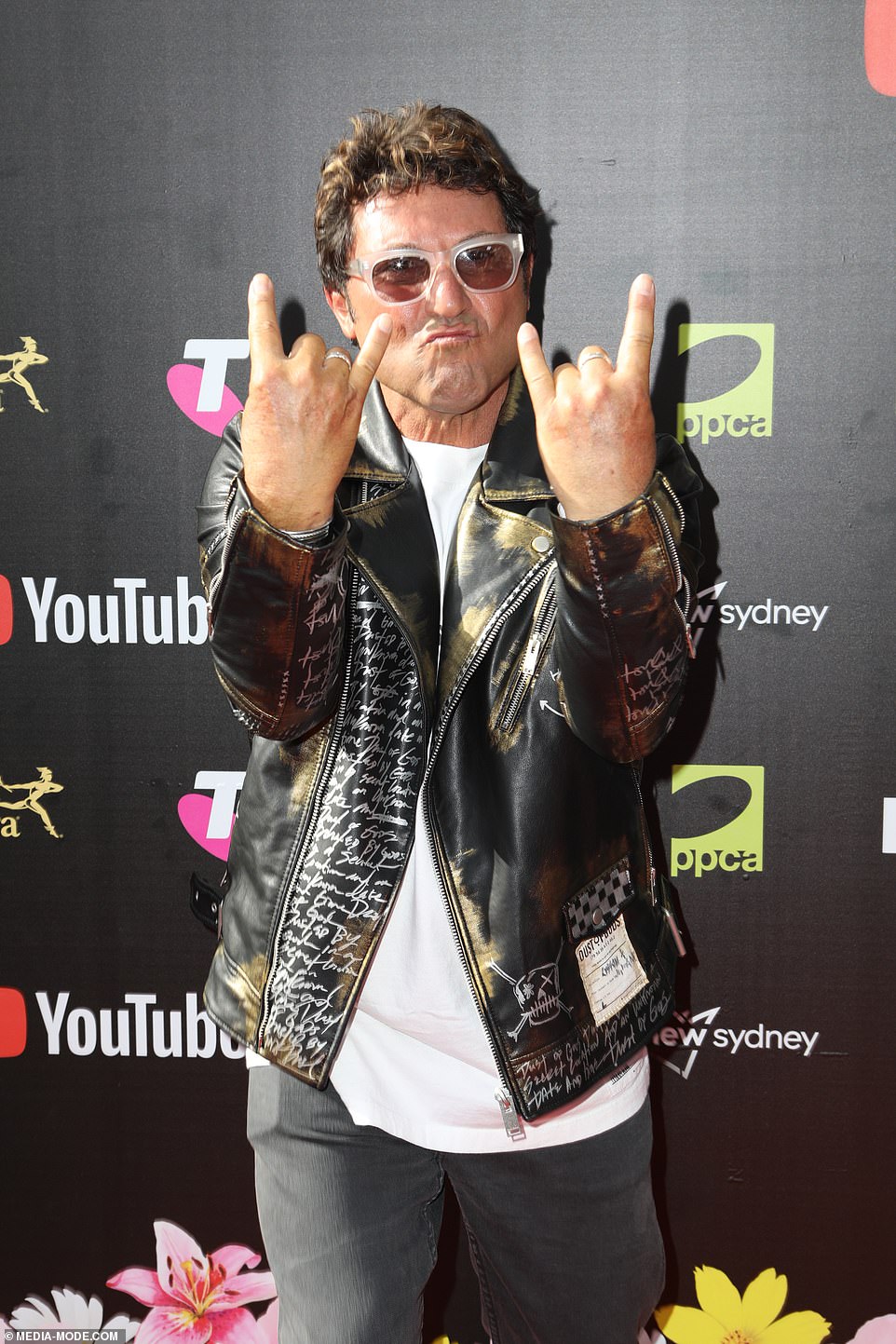 Missy Higgins wore a pin-striped red and black suit over a stylish black crop top when she rocked up to the event.

Open ‘Til L8 looked dapper with his hair slicked back, and chose to dress in an all black suit with statement shoes on the night.

Greta Ray smiled in her sleek sequin number which fell smoothly to the ground. While Kita Alexander showed off her toned physique in a black two-piece with a gold chain around her stomach.

Tones and I dressed in black from the neck down, adding a pair of giant sunglasses and a green fluffy hat to finish the look.

The Crown series six will ‘end on a high for King Charles’, say show...