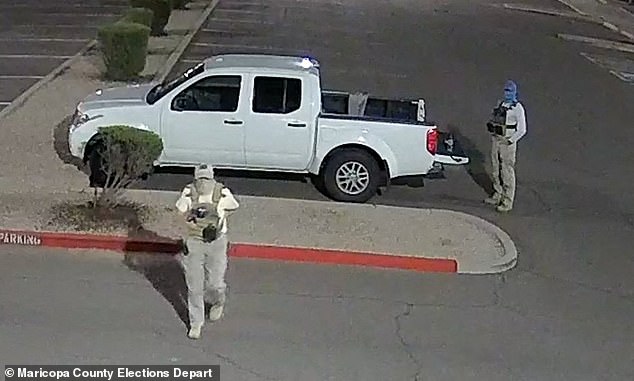 A judge in Arizona on Tuesday issued a temporary restraining order keeping a group of armed poll watchers at least 250 feet from drop boxes, after a string of complaints that voters felt intimated by people carrying firearms as they monitored voting.

The order also prevents monitors taking photographs of voters and requires them to refrain from claiming that anyone depositing multiple ballots is behaving illegally.

Arizona spawned a string of conspiracy theories in 2020 as supporters of Donald Trump tried to overturn his defeat in the state.

Ahead of midterm elections, a string of groups – included Clean Elections USA, Yavapai County Preparedness Team and an offshoot of the Oath Keepers named the Lions of Liberty – announced plans to keep watch over drop boxers to prevent people stuffing them with hundreds of ballots.

The Arizona Alliance for Retired Americans and the League of Women Voters took reports of intimidation to court in an effort to keep monitors away.

On Tuesday, the two sides agreed a set of measures to protect voters from intimidation. 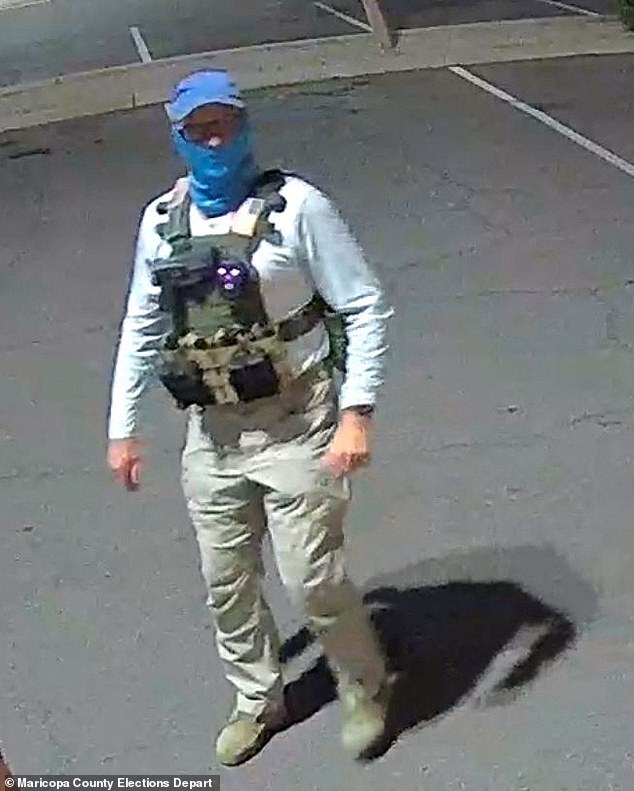 A man in tactical gear is seen on October 21 in Mesa, Arizona by a voter drop box

Monitors must not approach within 75 feet of a drop box – as required by law – nor intentionally follow anyone delivering ballots, even if they are more than 75 feet away from the both.

‘But a defendant shall not be in breach of this order if they reveal any firearm or body armor by accident. Defendants shall not instruct any person to violate this rule.’

Democracy activists brought a string of witnesses to the hearing to describe how they felt intimidated by the presence of monitors.

Leslie Hanson, a member of the League of Women Voters of Arizona, told the court she will not use a drop box this year because of reports of armed watchers

‘It’s disconcerting,’ she said, according to a Twitter thread maintained by Democracy Docket.

‘It’s unsettling to know that there are people watching you and thinking that you’re violating the law and they’re armed.’

However, an attorney for Clean Elections USA – which is headed by Melody Jennings, a busy poster on Donald Trump’s Truth Social platform – argued that people only felt intimidated because of negative media reporting.

The order requires Jennings to post the following message on her Truth Social page: ‘It is not always illegal to deposit multiple ballots in a ballot drop box. It is legal to deposit the ballot of a family member, household member, or person for whom you are the caregiver.’

Although Jennings and her organization fought on, Lions of Liberty said last week it had told its members to stand down its monitoring operation.

The drop boxes are meant to offer a convenient and secure place to submit ballots. But since 2020 they have become the target of anger among some supporters of Donald Trump.

The film ‘2000 Mules’ spread the idea that drop boxes were stuffed with fraudulent ballots in the 2020 election – but the claims have been widely discredited.

Nowhere is the issue more explosive than Arizona, which has been the center of conspiracy theories.

President Joe Biden won the divided state by only 10,000 votes, ending a run of decades of Republican victories, triggering questions among Trump supporters about how it could have happened.

But multiple investigations, including a partisan ‘audit’ of Maricopa County by Cyber Ninjas, a company hired by Republicans, found no widespread fraud in the 2020 vote.

This time around, those conspiracies have spawned multiple efforts to monitor voting.

Arizona’s secretary of state last week said her office had received six complaints of potential voter intimidation, as well as a threatening email sent to the state elections director. 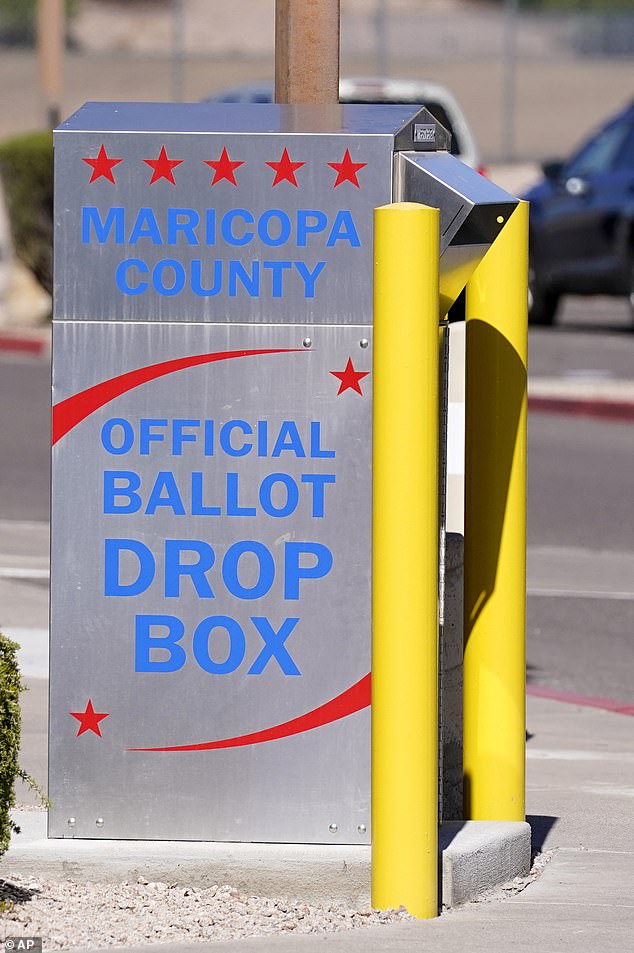 Drop boxes such as these are common across Arizona, but have become highly contentious 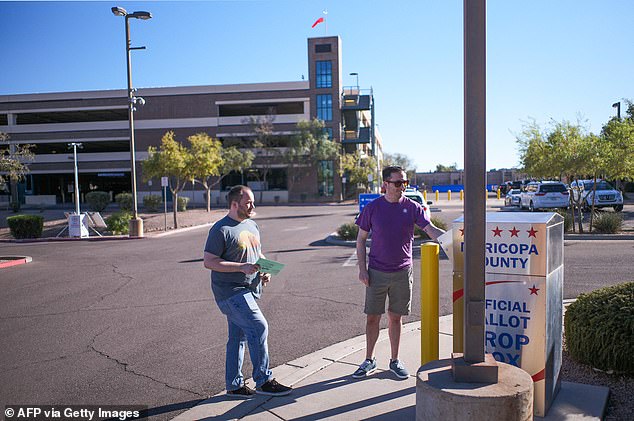 Dave Brehmer and Chad Maier drop their ballot for the upcoming midterm elections in the drop box near the Maricopa County Juvenile Court Center in Mesa, Arizona

However, the groups scored a win on Friday when a federal judge said they could not be barred from monitoring the boxes.

‘Plaintiffs have not provided the court with any evidence that defendants’ conduct constitutes a true threat,’ U.S. District Court Judge Michael Liburdi wrote.

‘On this record, defendants have not made any statements threatening to commit acts of unlawful violence to a particular individual or group of individuals.’

However, that was not the end of the matter.

The Department of Justice weighed in on Monday, saying ‘vigilante ballot security measures,’ including filming of voters was likely illegal and a violation of the Voting Rights Act.

‘When private citizens form “ballot security forces” and attempt to take over the state’s legitimate role of overseeing and policing elections, the risk of voter intimidation — and violating federal law — is significant,’ the department said in a ‘statement of interest.’

The department said that the First Amendment’s right to assembly does not permit people assembling for the purpose of coercing voters.

Steve Harvey ‘lost a lot of respect for’ Will Smith after he slapped Chris...

Addison Rae works up a sweat in tiny spandex shorts and sports bra at...

Shohei Ohtani ‘will get record offer from the Mets next winter’