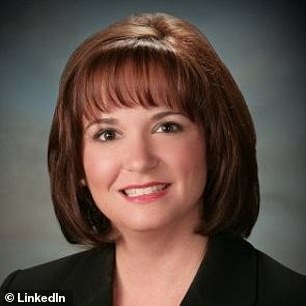 Arizona Republican gubernatorial candidate Kari Lake says she ‘will become governor’ despite the race being called in favor of Democrat Katie Hobbs.

Lake‘s comment comes after her campaign was handed a lifeline on Saturday when the state’s attorney general’s office demanded explanations for a string of election day problems before the final results can be certified.

Lake told DailyMail.com it vindicated her decision to fight on, even though the Associated Press and other news organizations called the race for her opponent.

With more than 95 percent of votes tallied, Lake trails Hobbs by fewer than 18,000 votes.

‘The way they run elections in Maricopa County is worse than in banana republics around this world,’ she said in an exclusive interview, referring to the state’s most populous county.

‘And I’ll tell you what, I believe at the end of the day that this will be turned around and I don’t know what the solution will be but I still believe I will become governor, and we are going to restore honesty to our elections.’

On Saturday, Assistant Attorney General Jennifer Wright wrote to one of the county’s top election officials detailing reports of a string of irregularities from printer problems that stopped ballots being tabulated, to confusion about procedures for transferring voters to alternate sites if they were unable to vote at the first location.

Lake’s claims of fraud have consistently been characterized by opponents as unfounded.

But in her letter, Wright says: ‘These complaints go beyond pure speculation, but include first-hand witness accounts that raise concerns regarding Maricopa’s lawful compliance with Arizona election law.’ 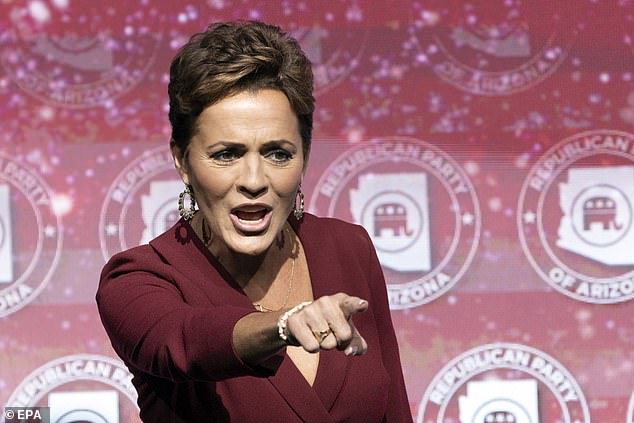 Kari Lake, the Republican candidate for governor of Arizona, said the letter confirmed all the stories she had heard from supporters about election day problems in Maricopa County 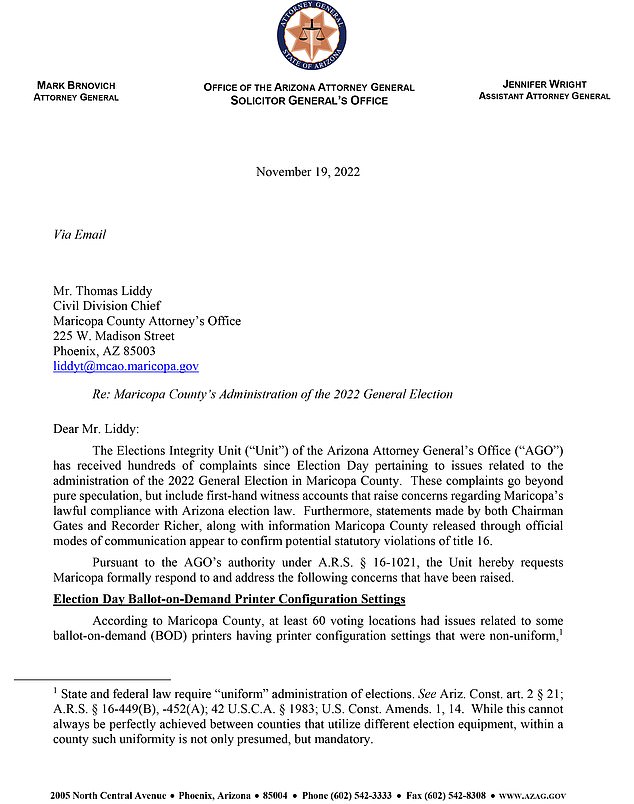 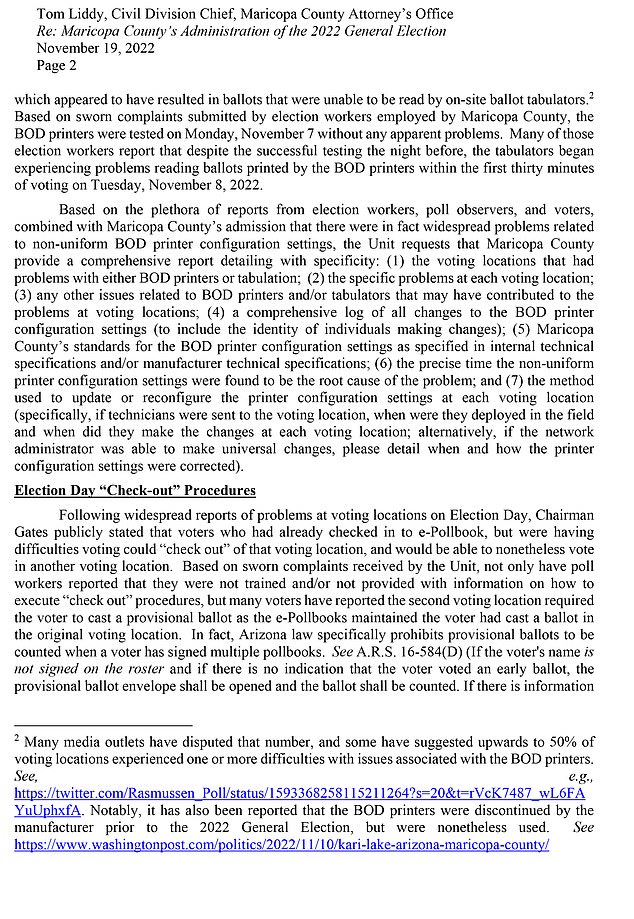 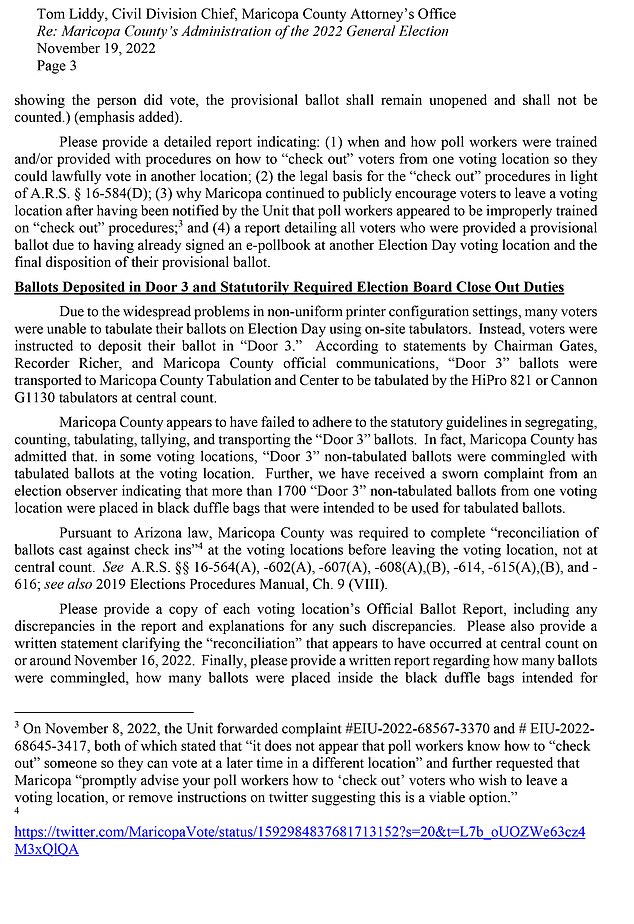 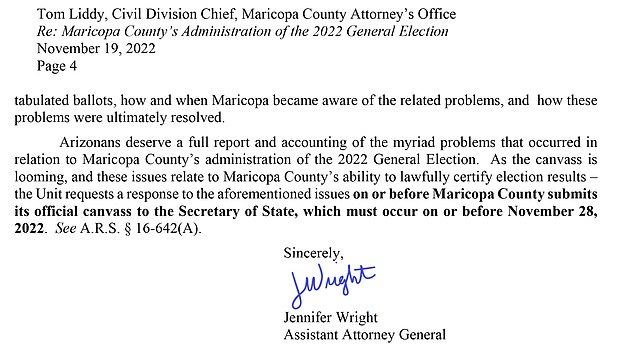 Wright wrote to Thomas Liddy, civil division chief at the Maricopa County’s Attorney’s Office asking for answers before the state’s results are certified on November 28

She goes on to demand answers before the results can be certified.

‘Arizonans deserve a full report and accounting of the myriad problems that occurred in relation to Maricopa County’s administration of the 2022 General Election,’ Wright wrote in the letter to Thomas Liddy, civil division chief at the Maricopa County’s Attorney’s Office, obtained by DailyMail.com.

‘As the canvass is looming, and these issues relate to Maricopa County’s ability to lawfully certify election results – the Unit requests a response to the aforementioned issues on or before Maricopa County submits its official canvass to the Secretary of State, which must occur on or before November 28, 2022.’

Lake’s team has been posting videos of supporters who say they had problems on election day and later discovered their vote had not been counted, according to the county website.

She has refused to concede defeat, in line with a campaign waged on claims that the 2020 election was stolen from Donald Trump.

Arizona was the center of conspiracy theories when Trump lost the state narrowly to Biden, the first Republican presidential candidate to lose Arizona since 1996.

Wright was appointed in September to head a new elections integrity unit. However, she immediately attracted the anger of liberals who said her previous work with Verify the Vote Arizona — closely linked to True the Vote, which has made uncorroborated voter fraud claims in the past — made her unsuitable.

Her letter pinpoints problems in Maricopa County, which includes the city of Phoenix and covers almost 60 percent of the state’s electorate. 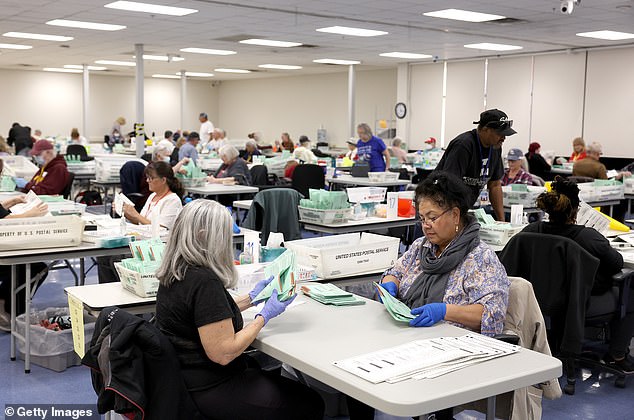 Election workers open mail in ballots at the Maricopa County Tabulation and Election Center on November 11, 2022, in Phoenix, Arizona 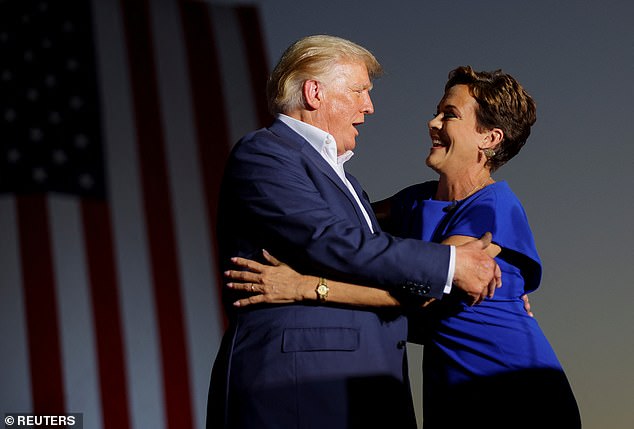 Trump held a rally for Lake in October. He has praised the way she has hammered the issue of election fraud to take on Democrats in Arizona during a hard-fought race

She writes that at least 60 locations had problems because of ballot-on-demand printers that had printer configuration settings that were ‘non-uniform,’ meaning they could not be read by tabulating machines.

‘Based on sworn complaints submitted by election workers employed by Maricopa County, the BOD printers were tested on Monday, November 7 without any apparent problems,’ she wrote.

She goes on to ask for full details of the extent of the problems and logs of any changes to settings.

‘Based on sworn complaints received by the unit, not only have poll workers reported that they were not trained and/or not provided with information on how to execute “check out”” procedures, but many voters have reported the second voting location required the voter to cast a provisional ballot as the e-Pollbooks maintained the voter had cast a ballot in the original voting location,’ she wrote.

‘In fact, Arizona law specifically prohibits provisional ballots to be counted when a voter has signed multiple pollbooks.’

According to one account, more than 1,700 untabulated ballots were put in black duffle bags intended for tabulated votes. 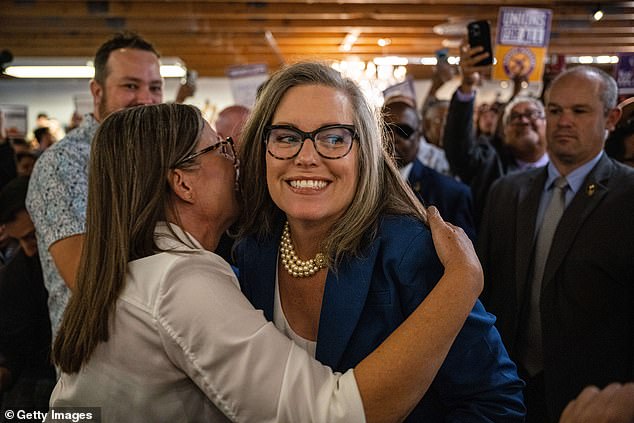 With more than 95 percent of votes tallied, Lake trails Democratic candidate Katie Hobbs by fewer than 18,000 votes. The AP called the race for Hobbs on Monday night

Wright goes on to ask when those problems were identified and when and how they were resolved.

Lake said that her supporters had heeded calls to get out and vote on election day but had been let down by the system.

’70 percent of our supporters were voting on election day and they were showing up and the machines didn’t work, the tabulators didn’t work, printers didn’t work – that’s massive,’ she said.

‘We’ve got elections that aren’t real.’

Her team has been hiring lawyers to challenge the outcome.

She said she did not know what the right solution was, whether the election should be rerun, or it there was another answer.

‘The people of Arizona after this election have lost all faith in our election systems in Arizona,’ she said.

‘Not only are we the laughingstock of elections across the globe – and I would throw some of the most corrupt countries in the world into that category – and we still top the list.

‘The way they run elections in Maricopa County are worse than in banana republics around this world.’

She spoke to DailyMail.com after arriving back in Arizona from Florida, where she was a guest at Trump’s Mar-a-Lago club. She attended an event with the America First Policy Institute, a think tank founded last year by Trump allies.

But her attendance will fuel speculation that she is being lined up as a possible running mate after the former president last week announced a 2024 run.

Details of the letter emerged after the Washington Post described a tense phone call between attorneys for her campaign and for the Republican National Committee with Liddy just before the AP called the race.

Lake’s representatives asked a string of questions about the need for rapid which Liddy later said included what sounded like a threat.

His account suggested they told him there were ‘a lot of irate people out there’ and that the campaign ‘can’t control them.’

Rishi Sunak WILL be the next PM: Penny Mordaunt drops out of Tory race

Inside Celebrity Beyond, the Gwyneth Paltrow-approved cruise ship for people who don’t like cruising