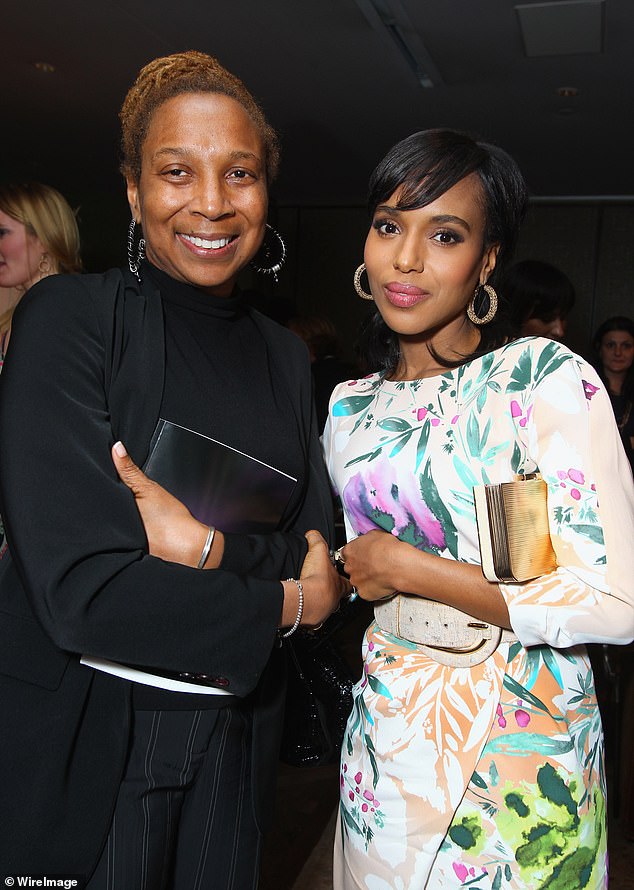 When Kimberlé Crenshaw first unveiled critical race theory to a small group of fellow academics in 1989, little did she know that over 30 years later it would pit parents against teachers across America.

Prof Crenshaw, 63, also can’t have known just how much she would stand to gain financially and professionally from her theory and its toxic effect.

It turned her into a superstar of academia and activism. Now she earns at least $450,000 a year from teaching positions at UCLA and Columbia and up to $100,000 from delivering speeches – not to mention possible income from her own think tank and podcast.

The divisive theory, through which America’s history is seen as racist, centers on the idea that racism is systemic in the nation’s institutions and that they function to maintain the dominance of white people in society.

It has turned schools into battlegrounds as outraged parents fight to stop their children being indoctrinated, while the GOP has legislated against it.

‘It was how to think, how to see, how to read, how to grapple with how law has created and sustained race—our particular kind of race and racism—in American society,’ Crenshaw told Vanity Fair in 2021 of the seminal brainstorming session where she first floated the theory.

She gave the interview to the prestigious magazine from her spacious UCLA office, where she teaches the theory to the next generation of lawyers and policymakers while earning $127,886 a year.

Befitting a legal scholar of her standing, Crenshaw also holds down another job on the opposite coast at Columbia, where she is paid an estimated $217,328 – with the possibility of an additional $89,856 bonus – to spread the word.

Somehow she also finds the time to run the African American Policy Forum and the Center for Intersectionality and Social Policy Studies, where she is the co-founder and executive director.

It is unclear exactly how much Crenshaw earns from the AAPF, but a Director of Communications earns $120,000. As the executive director she might be expected to earn similar if not more.

The AAPF is the forum through which Crenshaw runs a summer school to teach CRT to teachers – despite parents widely despising the theory and implausible protestations from the leftwing teaching establishment that it is not on the curriculum.

She also has her own podcast – called Intersectionality Matters! – which to date has 52 episodes.

And if that were not enough, she is a prolific writer –  publishing or editing at least 18 works – and last year spent weeks protesting GOP bans of explicit and racist books in schools. 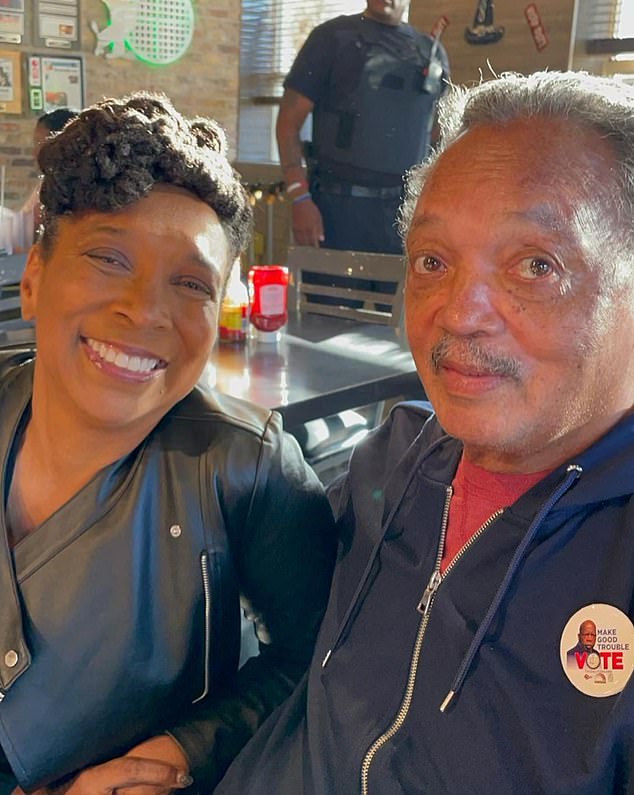 While her fervent belief in America’s deep-rooted racism and that classrooms are a legitimate battleground cannot be disputed, it is instructive to note quite how much Crenshaw has made from pushing her pet theory. Pictured: With Rev Jesse Jackson in 2022

Crenshaw is described on the All American Speakers website as a ‘specialist on race and gender equality’ and a ‘leading voice in calling for a gender-inclusive approach to racial justice interventions’.

While her fervent belief in America’s deep-rooted racism and that classrooms are a legitimate battleground cannot be disputed, it is instructive to note quite how much Crenshaw has made from pushing her pet theory.

However, despite the widespread condemnation Crenshaw is unbowed.

‘It is far better that [CRT] is circulating and being used than if only 25 law professors have read it,’ she told The Guardian in 2020.

She explained that her parents had started calling her a lawyer from the age of six – with her father joking ‘don’t let her get a word in edgewise, when she starts to talk, you will not know what you were trying to say’.

Born in Ohio, Crenshaw described growing up and going to a new Christian school – where a teacher would portray black activists as ‘demons’. 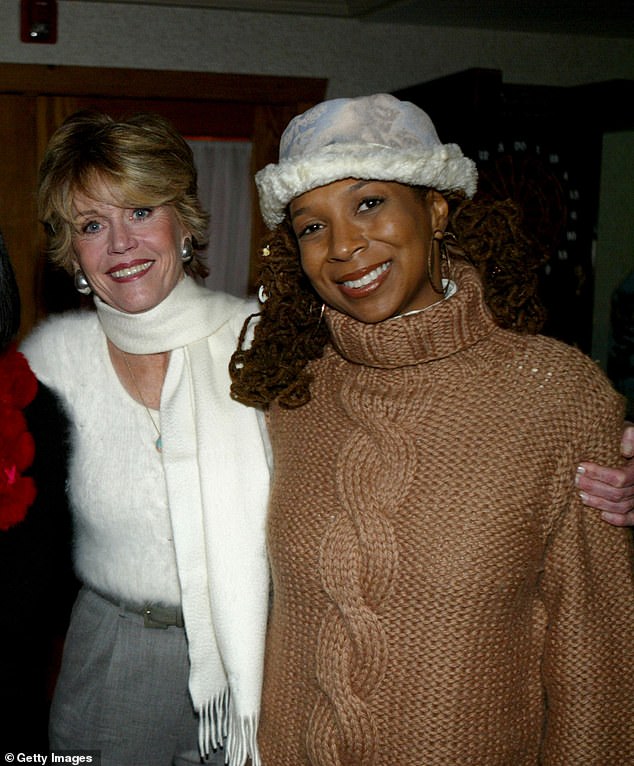 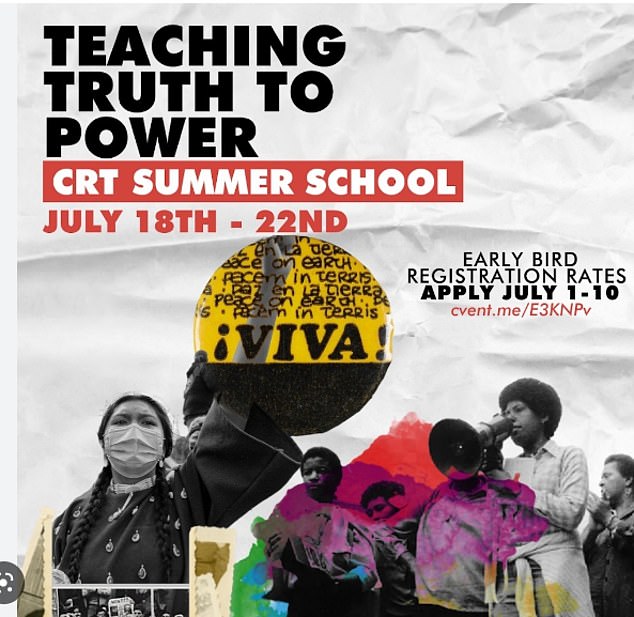 Crenshaw founded the African American Policy forum, for which she is the executive director, and created the CRT Summer School

She claims that she put her hand up to say that her brother was a protestor, but was sent to the principal’s office before begging her mother to take her out of the school.

After Canton McKinley High School, Crenshaw attended Cornell – where she was a member of the Quill and Dagger secret society for top students – and graduated with a bachelor’s degree in government and Africana studies.

Then on to Harvard where she received a JD from Law School in 1984, before gaining a Masters of Law degree from the University of Wisconsin.

The 1989 paper that would come to define her career, and later send shockwaves through education, was opaquely entitled Demarginalizing the Intersection of Race and Sex and was published in the University of Chicago Legal Forum.

It brought to the world her theory of intersectionality, of which CRT is a component, which describes how race, class, gender and other characteristics can ‘intersect’ and compound one another.

Critics point out that it creates ‘a new caste system’ that puts nonwhite, non-heterosexual people on top. 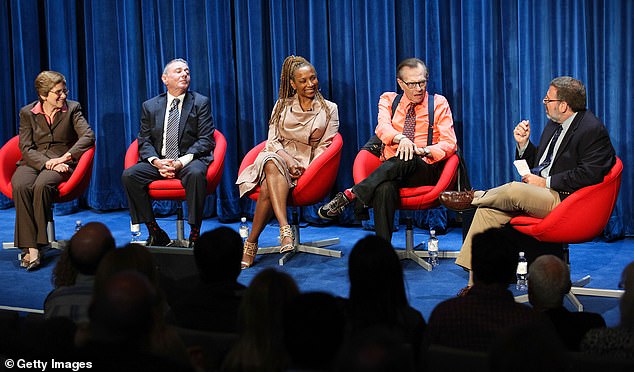 CRT has turned schools into battlegrounds as outraged parents fight to stop their children from being indoctrinated, while the GOP has legislated against it. Pictured: Crenshaw with Larry King in 2014 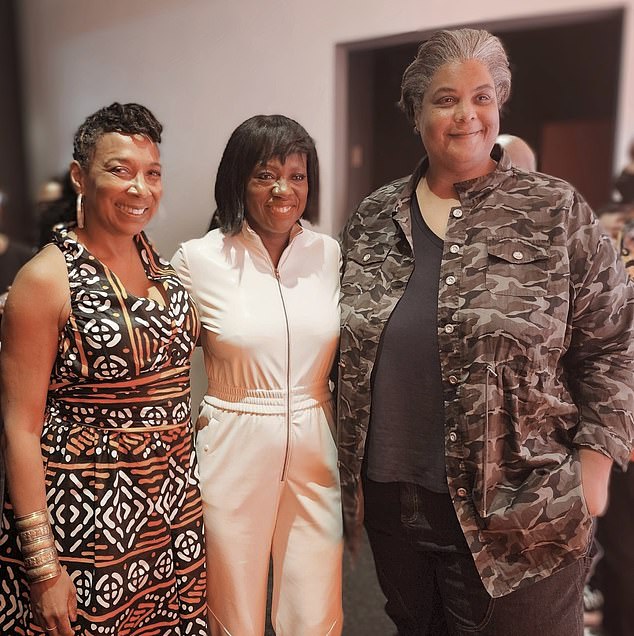 Research released last October found that nearly all of America’s schoolkids have studied or picked up critical race theory in class. Pictured: With Viola Davis and Roxanne Gay in 2022

Its success only enhanced her standing at UCLA and Columbia, two colleges she had worked at since 1986.

She will spend just one week teaching her class at Columbia in January from 11am until 4pm.

Crenshaw is also given free accommodation at a luxury apartment complex just minutes from Columbia.

It is unclear how often she teaches her class at UCLA but she is described as ‘splitting her time’ between the two faculties.

In 2020, in the wake of nationwide protests over the killing of George Floyd and Breonna Taylor, Crenshaw’s organization – the AAPF – launched a push to educate teachers about CRT.

Students, teachers, activities were able to access five days of courses covering a ‘range of issues’ with 600 people enrolling in the summer school for 2021.

Crenshaw herself led a discussion on intersectionality, with a limited number of scholarships offered to those who could not afford the school. 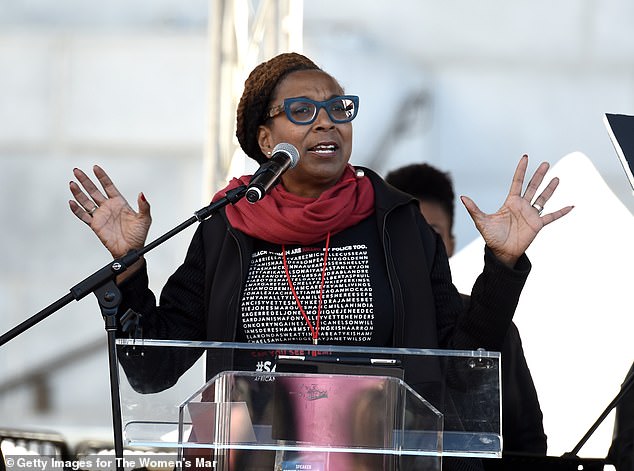 Crenshaw herself led a discussion on intersectionality, with a limited number of scholarships offered to those who could not afford the school 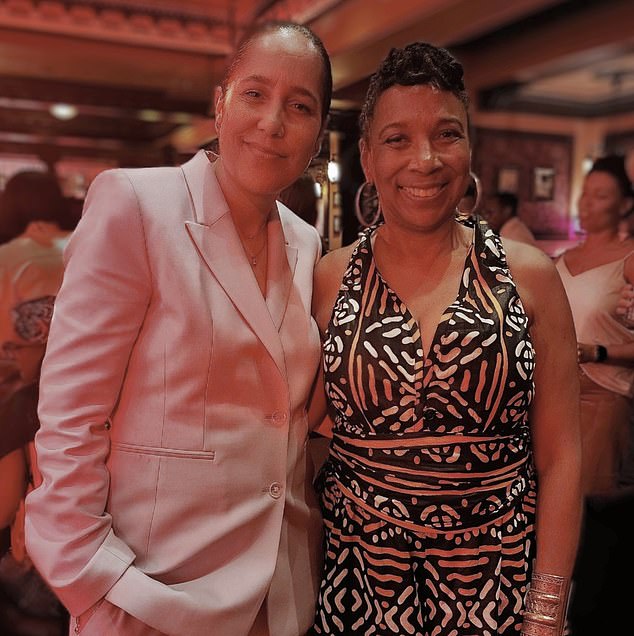 The theory, through which America’s history is seen as racist, centers on the idea that racism is systemic in the nation’s institutions and that they function to maintain the dominance of white people in society. Pictured: With Gina Prince-Bythewood in 2022

Those who attended from a public company were asked to pay $1,000, with the cost ranging from $75 for an undergraduate or graduate student to $500 for a large non-profit.

‘So, what we’re fighting now, and what some of those teachers are fighting, is the effort to silence all recognition, all conversation, all tools, all histories, all of the current consequences of our past.’

CRITICAL RACE THEORY: WHAT DOES IT MEAN?

The fight over critical race theory in schools has escalated in the United States in recent years.

The theory has sparked a fierce nationwide debate in the wake of the Black Lives Matter protests around the country over the last year and the introduction of the 1619 Project.

The 1619 Project, which was published by the New York Times in 2019 to mark 400 years since the first enslaved Africans arrived on American shores, reframes American history by ‘placing the consequences of slavery and the contributions of black Americans at the center of the US narrative’.

The debate surrounding critical race theory regards concerns that some children are being indoctrinated into thinking that white people are inherently racist or sexist.

Those against critical race theory have argued it reduces people to the categories of ‘privileged’ or ‘oppressed’ based on their skin color.

Supporters, however, say the theory is vital to eliminating racism because it examines the ways in which race influences American politics, culture and the law.

Crenshaw is part of a network of activists pushing CRT. Every Monday she speaks to Minyon Moore, an outside adviser to Vice President Kamala Harris who was selected by Joe Biden to pick the first black Supreme Court Justice.

Moore is listed as part of the Black Lives Matter Global Network Foundation’s board of directors in the charity’s filings.

‘These right wing moms don’t want their kids to have to listen to the trauma our kids experience. Their comfort is more important than confronting the realities of our lives,’ Crenshaw said.

‘We have to make it costly for those who we elected to be silent.

‘Part of what we have to do is give them, and I know that you’ve been working on this for the last year … to give people the right talking points and the weapons – because they’ve taken the work to weaponize us, and we have to take it back.’

Crenshaw did not respond to a request for comment from DailyMail.com.

Research released last October found that nearly all of America’s schoolkids have studied or picked up critical race theory in class.

Millions of schoolchildren learn about everything from ‘white privilege’ to ‘systemic racism’ and ‘unconscious bias’ in class, found the Manhattan Institute, a right-wing think tank with a record of spotlighting CRT.

A poll found that 93 percent of respondents, aged 18-20, had learned about at least one aspect of the controversial racial justice theory in schools.

Report author Zach Goldberg said the findings were ‘disturbing’ and stood in stark contrast to claims from some teacher groups that CRT was not taught to high schoolers, but was confined to university law courses.

So far seven states have banned CRT from classrooms and 16 are considering a ban.

Last April Ron DeSantis signed the ‘Individual Freedom’ bill outlawing CRT. It prevents educators from teaching topics related to race and is designed to prevent teachers from making students feel guilt or shame about their race because of historical events.

‘We believe in education, not indoctrination,’ DeSantis said.

‘We believe an important component of freedom in the state of Florida is the freedom from having oppressive ideologies opposed upon you without your consent.’

No doubt Crenshaw will take the seismic shockwaves and convulsions that have gripped America, unleashed by her theory, as validation.

But the society that she so appears to dislike and depict as racist, is also one that has allowed her to become wealthy and live a coast-to-coast jet set lifestyle with all the trappings. Her stock among the ‘wokerati’ and top liberal political class keeps rising. Her notorious theory is known by virtually everyone.

It is a thought she would immediately dismiss, but perhaps America – far from being the racist hellscape she describes – has been too indulgent and generous to Professor Crenshaw?

Kate and William ‘can win back US hearts’ with their Stateside trip, says royal...