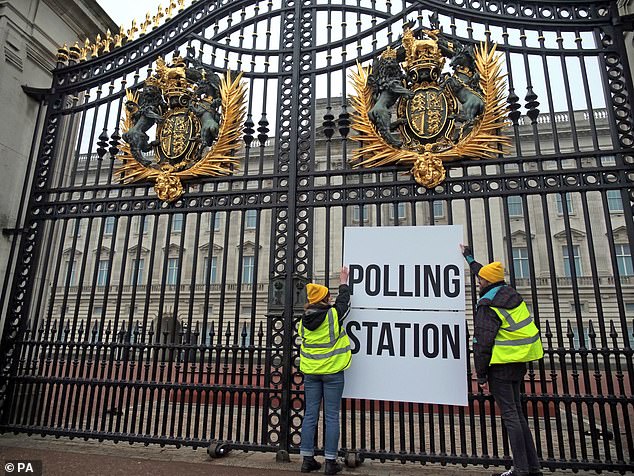 By Sukhmani Sethi For Mailonline

Supporters of the campaign group Republic tried to turn Buckingham Palace into a polling station on Wednesday – the first in a series of protests against the King’s coronation.

Two activists from a campaign group called Republic, which branded the coronation a waste of taxpayers’ money, unveiled the two-metre polling station sign on the ornate railings of the famous royal residence at around 8am.

The group, campaigning for an elected head of state, is vowing to stage further stunts in the run-up to Charles’s May 6 coronation, as well holding a large demonstration on the day.

Graham Smith, Republic’s spokesman, said: ‘We want to drive home the need for a vote on the future of the monarchy. We should be able to decide, do we want Charles or a choice?

‘Within a few days thousands of people have signed a petition calling for a public vote on the monarchy. We’re expecting tens of thousands more to add their name to the demand over coming weeks.

‘We’re calling on people to put up their own polling station signs around the country at 6pm every Tuesday. It’s time to drive home this message that the people deserve a vote.’ 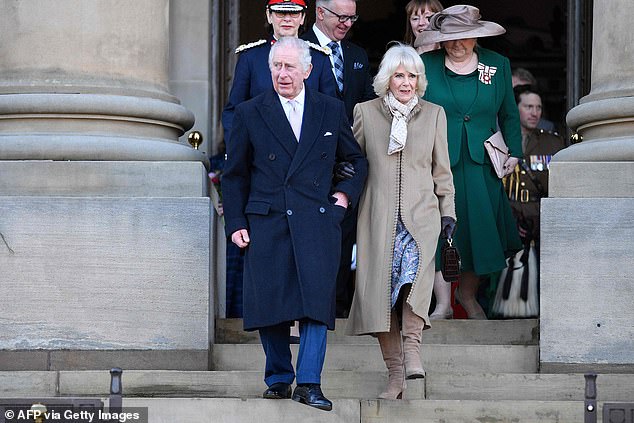 The anti-monarchy campaign group Republic branded the coronation a waste of taxpayers’ money, as it demands for an elected head of state

The group branded the coronation a waste of taxpayers’ money on its petition page.

‘An outdated, pointless coronation that will cost tens of millions of pounds of taxpayers’ money during a cost-of-living crisis does not serve the people of Britain,’ it said.

‘It’s time for a public vote on the future of the monarchy.

‘With the coronation of Charles in May, this is the moment to have a serious conversation about the future of this country.?’

The King will be anointed and crowned at Westminster Abbey in an ancient ceremony steeped in pageantry in just over three months’ time.

It will form part of a weekend of celebrations which includes a procession from the Palace, a balcony appearance and a concert at Windsor Castle.

Meghan Markle opens up about her suicidal thoughts while accepting ‘anti-racism’ award at NYC...