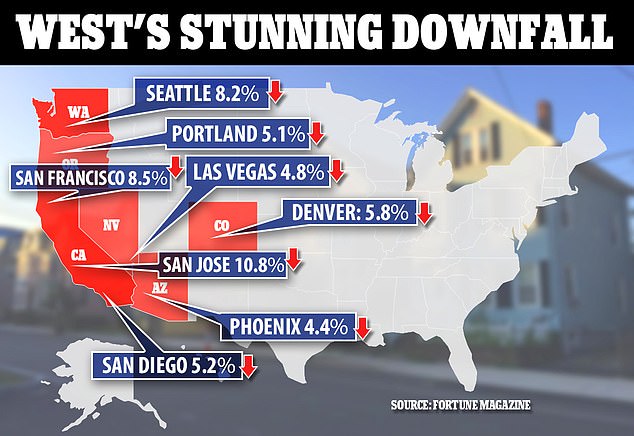 The housing market in the United States has reached a stunning downfall from highs seen in the immediate aftermath of the Covid-19 pandemic.

According to a study from the American Enterprise Institute that was published by Fortune Magazine, the West Coast is experiencing rapid housing price drops in cities including San Francisco and Portland, Oregon.

The study was conducted by Ed Pinto—director of the American Enterprise Institute’s Housing Center. Pinto told Fortune that he predicts that the ‘damage’ will spread for the Northeast, with low and middle-markets being hit the worst.

It’s Northern California that leads the way, with San Jose experiencing a drop of 10.8 percent since September, followed by San Francisco at 8.5 percent, then it’s Seattle at 8.2 percent, Denver at 5.8 percent, San Diego 5.2 percent, Portland 5.1 percent, Las Vegas 4.8 percent and Phoenix at 4.4 percent.

The West Coast is experiencing rapid housing price drops in cities including the crime-ridden San Francisco and Portland, Oregon

The Fortune report says that other cities across the country have seen ominous slight drops. Those in include, Dallas, Orlando, Atlanta and Raleigh.

However, during the post-Covid boom, those cities remained more affordable compared to their western counterparts therefore the drop off would always be less severe.

Pinto told Fortune: ‘The expensive parts of the market are the first to decline because they suffer most when the Fed takes away the punchbowl and rates rise.’

He continued: ‘That’s because high-income buyers borrow in the private markets, and when rates increase, they have a harder time qualifying for home loans than lower and middle income borrowers who get Fannie Mae, Freddie Mac and FHA loans.’

Pinto went on to say that the housing market is likely to be affected by the impending economic recession. He said that the an increase in unemployment will lead to more foreclosures and distressed sales. 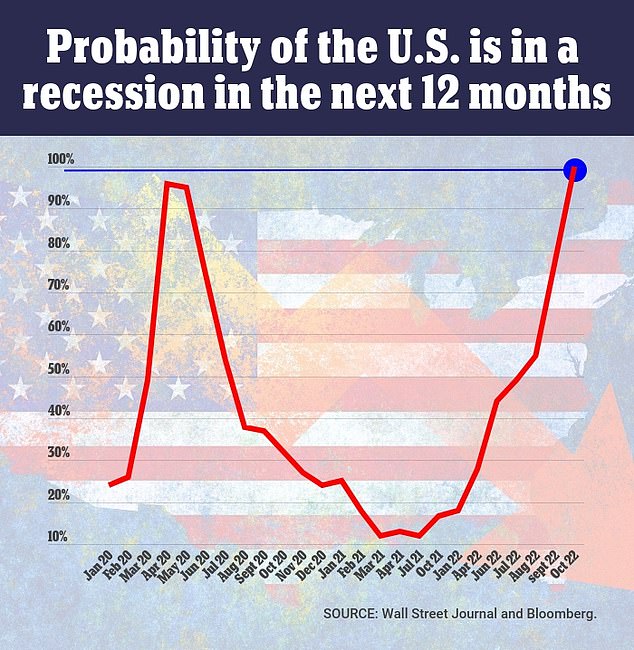 The economic downturn is likely to last for eight months

Earlier this month, a Bloomberg study of economist’s opinions found that a recession is a 100 percent certainty in the next 12 months.

A separate Wall Street Journal study that was published over the weekend found that 63 percent of economists felt a recession coupled with job losses was inevitable in 2023.

However that 63 percent is highest chance of recession that WSJ economists have given since July 2020 in the midst of recession.

Those involved in the study ascertained that the recession would bring about a federal interest rate cut at some point over the next two years.

In reference to that cut, the University of Michigan’s Daniil Manaenkov told the Journal: ‘Soft landing’ will likely remain a mythical outcome that never actually comes to pass.’

He said that people will seek to live closer to their jobs in order to save on gas costs. ‘ 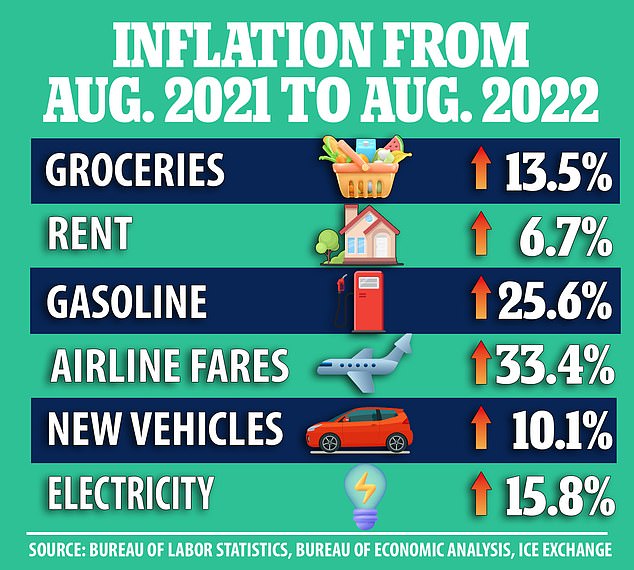 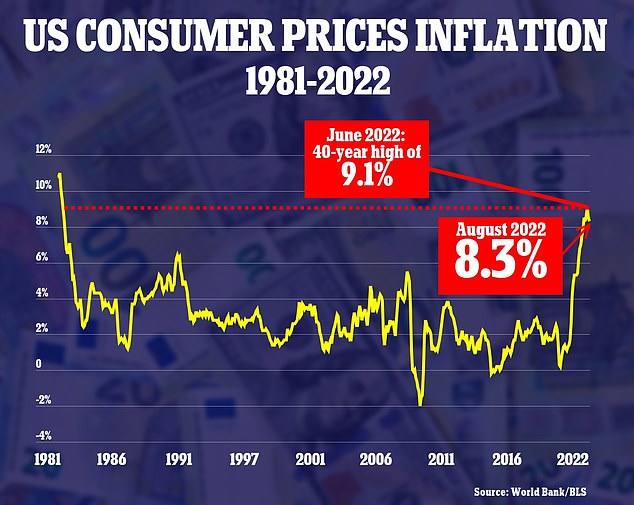 It’s Pinto’s opinion that homeowners in New England and the Tri-State area will suffer the most with growing gas prices.

‘That’s already reducing demand. Heating oil prices are extremely high in New England. Throw in higher gas prices on top of regular inflation. Plus, these are states are in the rust and frost belts. If unemployment rises substantially, their lower priced markets will be hit especially hard,’ Pinto said.

Whereas states such as Florida and the Carolinas, which saw huge migration during the Covid-19 will continue to thrive thanks to people leaving northern states for warmer climes.

In September, house sales fell to their lowest level on record, new data has shown, as mortgage rates hit a 20-year high and inflation bites into existing savings. 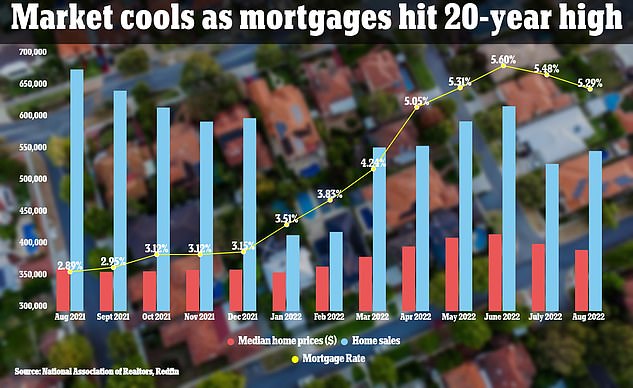 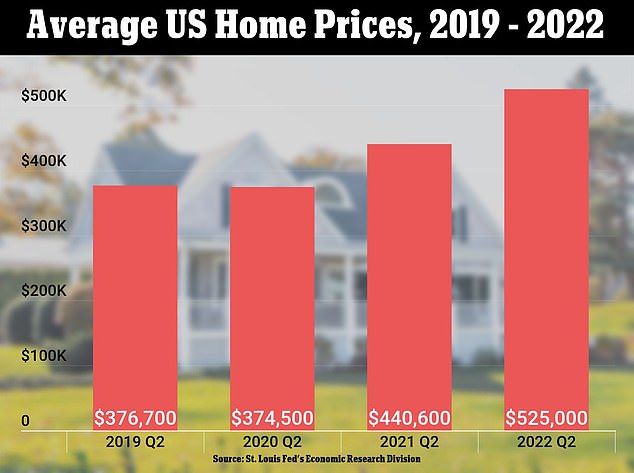 New data from Redfin, which boasts of running the country’s number one real-estate brokerage site, published on Wednesday saw the scale of the slowdown – which had been widely predicted.

The national average 30 year fixed rate mortgage rate was at 6.1 percent – up from 2.9 percent this time last year – and has only risen since.

Mortgage rates have more than doubled since last year, reaching a 20-year high last week, according to data released on Wednesday by the Mortgage Bankers Association.

The 30-year fixed rate climbed to 6.94 percent in the second week of October, up from 6.81 percent a week earlier.

Redfin also reported that sellers were rethinking, amid the seizing up of the market: new listings dropped by 22 percent last month, marking another grim record for the biggest decline in history, excluding the pandemic months of April and May 2020.

‘The U.S. housing market is at another standstill, but the driving forces are completely different from those that triggered the standstill at the start of the pandemic,’ said Chen Zhao, Redfin economics research lead.

‘This time, demand is slumping due to surging mortgage rates, but prices are being propped up by inflation and a drop in the number of people putting their homes up for sale.

‘Many Americans are staying put because they already relocated and scored a rock-bottom mortgage rate during the pandemic, so they have little incentive to move today.’

Biden gets snarky with reporter asking why he didn’t negotiate deal to give rail...