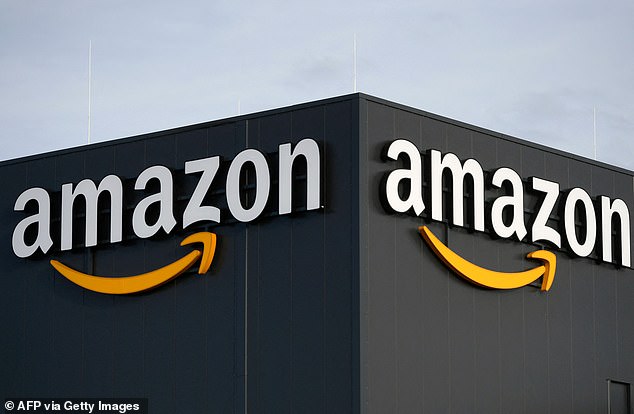 Thousands of Amazon warehouse workers are today staging a mass Black Friday strike across 40 countries including the US and Germany in a row over pay and working conditions.

The global strike action for one of the biggest shopping days of the year was called for by the campaign Make Amazon Pay. They have titled the protests and action ‘Make Amazon Pay Day’.

The initiative, promoted by groups on Twitter under #MakeAmazonPay listed the industrial action planned in the 40 countries across the globe.

The global strike action for one of the biggest shopping days of the year was called for by the campaign Make Amazon Pay. They have titled the protests and action ‘Make Amazon Pay Day’ (file image)

‘It’s time for the tech giant to cease their awful, unsafe practices immediately, respect the law and negotiate with the workers who want to make their jobs better.’ 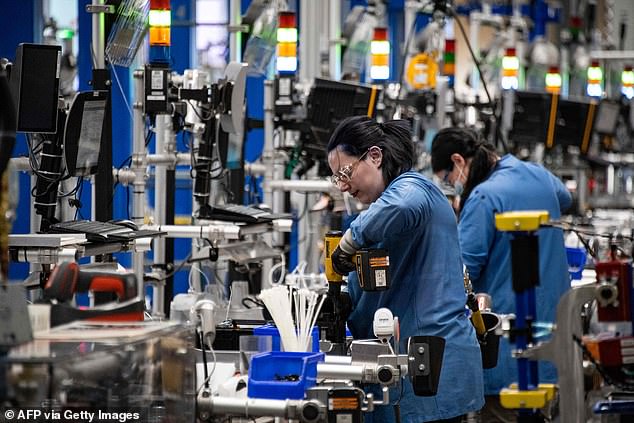 Amazon has come under fire for tough working conditions in the past- including grueling hours and timed toilet breaks. Pictured: Amazon’s Innovation Hub in Westborough on November 10

Amazon has come under fire for tough working conditions in the past- including grueling hours and timed toilet breaks.

The company has also been criticized for its injury record. In 2021, nearly half of injuries at US warehouses occurred at Amazon.

This is according to the Strategic Organizing Center, a coalition of unions.

The report released said: ‘Amazon employed one-third of all warehouse workers in the U.S., but it was responsible for nearly one-half (49%) of all injuries in the warehouse industry.’

In the past, Amazon has defended its safety record and denied the claims over injury rates at warehouses. 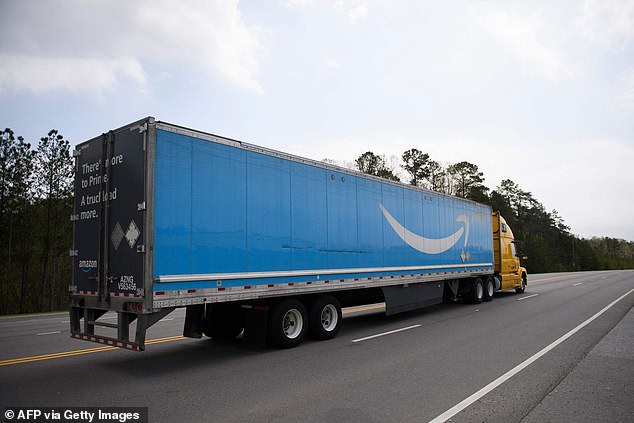 The working conditions have led to some fed-up Amazon workers wanting to unionize. In a warehouse in Staten Island in New York City, workers were the first Amazon center to take the step.

The judge ruling came in a court case brought by the National Labor Relations Board. They had sued Amazon in March and called for an employee to be reinstated after they were fired for organizing the union in Staten Island. 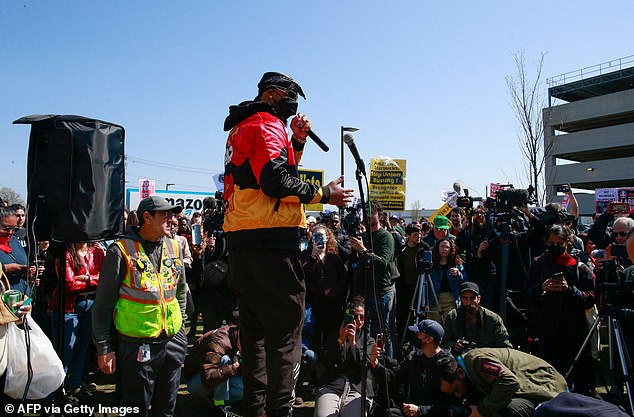 In Germany, work stoppages were planned at 10 fulfilment centres, according to the Verdi union.

The union demanded that Amazon recognize collective bargaining agreements for the retail and mail order trade sector and called for a further collective agreement on good and healthy work.

Monika di Silvestre, Verdi’s representative for Amazon workers, said: ‘This is the first time that Amazon has had an international strike day.

‘This is very important, because a major global corporation like Amazon cannot be confronted locally, regionally or nationally alone,’ she added.

A spokesperson for Amazon said: ‘These groups represent a variety of interests, and while we are not perfect in any area, if you objectively look at what Amazon is doing on these important matters you’ll see that we do take our role and our impact very seriously.

‘We are inventing and investing significantly in all these areas, playing a significant role in addressing climate change with the Climate Pledge commitment to be net zero carbon by 2040, continuing to offer competitive wages and great benefits, and inventing new ways to keep our employees safe and healthy in our operations network, to name just a few. Anyone can see for themselves by taking a tour at one of our sites.’

The strike action comes after it was in June revealed that Amazon could run out of new people to hire by 2024, with the company burning through its entire warehouse workforce annually thanks to grueling shifts, a leaked internal document showed. 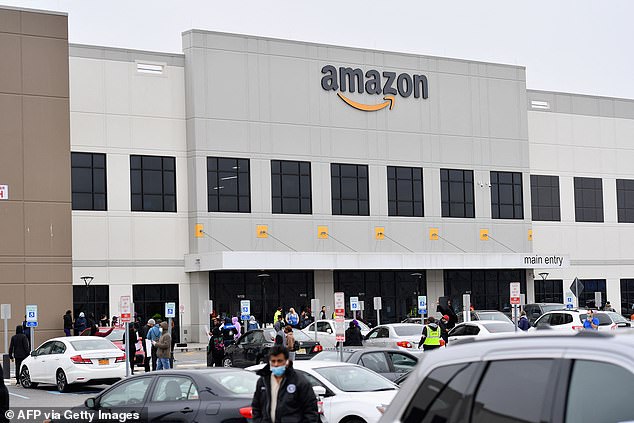 In Germany, work stoppages were planned at 10 fulfilment centres, according to the Verdi union. Pictured: Amazon workers at a Staten Island warehouse went on strike to in demand that the facility be shut down and cleaned after one staffer tested positive for the coronavirus in New York in 2020 (file image)

The document, first reported by Recode, includes the words: ‘If we continue business as usual, Amazon will deplete the available labor supply in the US network by 2024.’

The document was published internally in 2021. According to Recode, an Amazon spokesperson did not refute its authenticity.

The areas where employees are expected to be most scarce include the Inland Empire, California, an hour and a half east of Los Angeles. The region is around two hour drive from 20 million potential Amazon customers.

The document said that Amazon could run out of new workers in the Inland Empire by the end of 2021 or in 2022, although warehouses in Inland Empire continue to operate, and its unclear what, if any, staffing issues they currently face.

Mesa in Arizona was likely to run out of staff also, as statistics showed that Amazon – famed for the punishing, tightly-controlled working conditions imposed on warehouse staff – loses more workers than it hires every year. 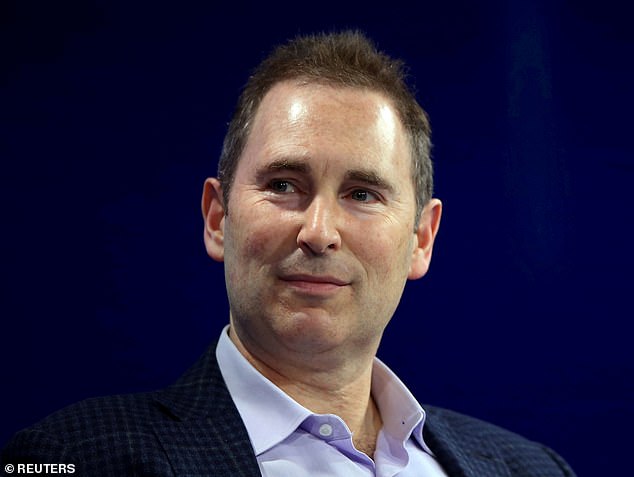 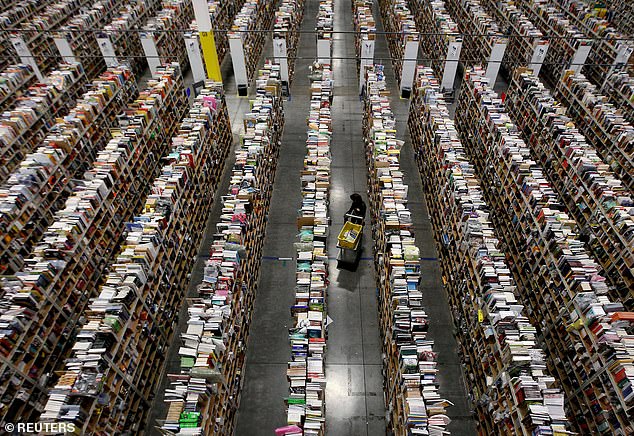 In 2020, for every 100 Amazon workers, six were injured, according to the Washington Post.

Wilmington, Delaware and Memphis, Tennessee were also at risk of running out of staff, the report showed.

According to Amazon’s own data, the company had an attritional rate of 123 per cent last year.

That means that over the course of the year, the number of workers who left the firm was equivalent to the entire number working there at the start of the year – with an additional 23 per cent on top.

Many workers at Amazon do stay longer, particularly those in more senior roles. But others come and go within the course of a year, inflating the attrition figure.

Amazon employs around a million people in the US, including head office workers, making it the second biggest private employer, behind the 2.3 million-strong Walmart ‘family.’

Its attrition rate is far above the national average for the most common jobs at Amazon, in warehouse work and transportation.

In 2020, for every 100 Amazon workers, six were injured, according to the Washington Post.

In September, the company’s CEO Andy Jassy said in an interview on CNBC: ‘For us, employee safety is priority number one for us in our fulfillment centers.’

Jassy assumed the role of CEO from founder Jeff Bezos in July 2021.

In the years before Covid-19, Amazon lost workers at a rate of 3% per week coupled with a 150% turnover annually, reports the New York Times. 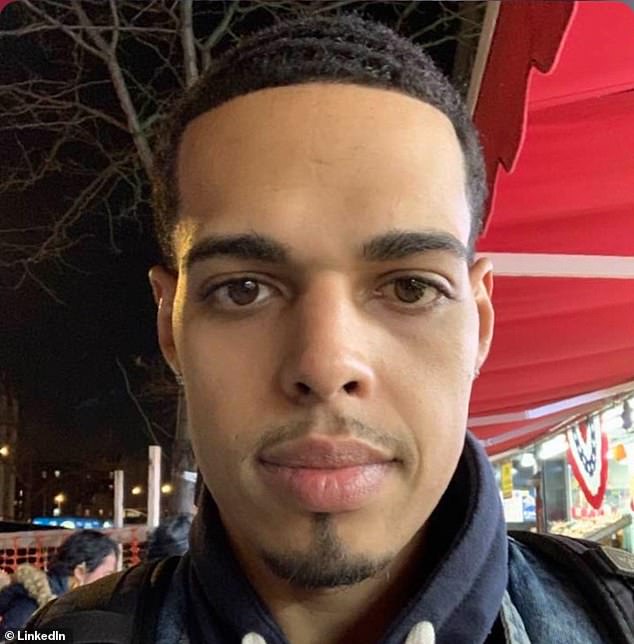 Jose Pagan, pictured here, said that he was fired electronically after taking two days off to deal with an infected tooth

One anecdote relayed in the Recode article mentions an Amazon supervisor from The Bronx in New York.

Jose Pagan, 35, who supported his wife and children on his Amazon salary,  said that he was fired electronically after missing work to treat an infected tooth.

Pagan said that he did not have enough notice to use vacation days and didn’t have enough unpaid time off left which is what led to his termination.

He went on to say that even though he had a doctor’s note, the company didn’t care.

Pagan worked for a full week following his health issues and found out that he was fired when he showed up for work one night and found that his keycard didn’t work.

He was then told that he no longer worked at the company.

Pagan went to a HR representative who told him that the company would welcome him back in 90 days and in the mean time he should try and get some work as a driver with Uber or Grubhub.

At the time of his firing Pagan was on the verge of being promoted. 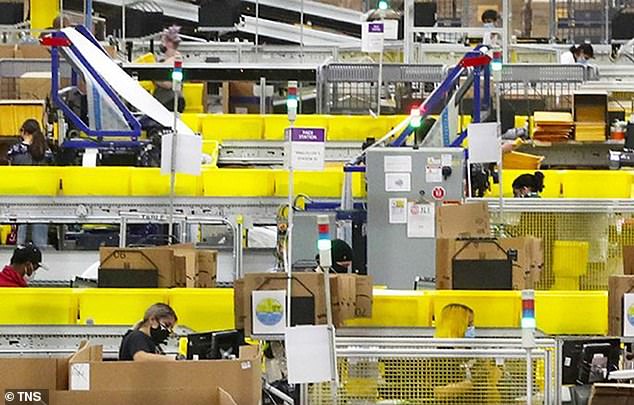 One former manager said: ‘It was almost impossible to get fired as a worker’ 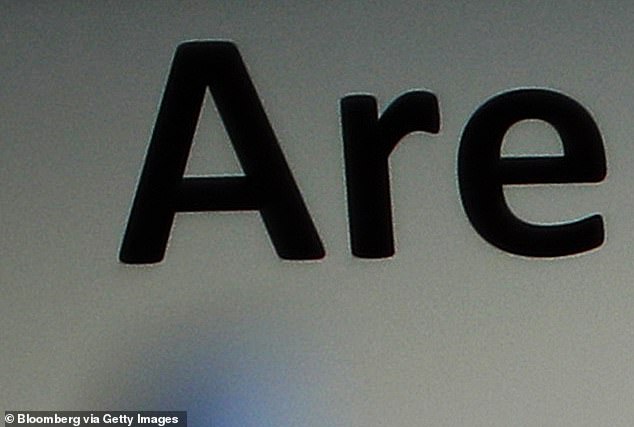 Jassy, said in an internal memo to employees in April 2022 that there is no ‘silver bullet’ to make Amazon facilities magically safer

Despite multiple reports of casual firings, one former manager at Amazon’s Phoenix plant, told Recode, that now the culture is more geared toward keeping workers due to the high attrition rates.

Michael Garrigan said: ‘They were so concerned about attrition and losing people that they rolled back all the policies that us as managers had to enforce.’

Garrigan said that managers joked about not bothering to write up workers with citations because HR would ‘exempt it.’

He said: ‘It was almost impossible to get fired as a worker.’

Jassy, said in an internal memo to employees in April 2022 that there is no ‘silver bullet’ to make Amazon facilities magically safer, reports CBS News.

Jassy said in part: ‘We don’t seek to be average. We want to be best in class. We still have a ways to go.’

While in December 2021, six Amazon employees were killed in Edwardsville, Illinois, when a tornado struck the facility.

Workers who survived the tornado later filed a lawsuit against the construction company who built the facility. In it, the plaintiffs said that there was no proper sheltering available inside, reported KMOV in May 2022.

Following the tornado, Amazon denied claims from employees at the Edwardsville center that the company banned them from using their cell phones at work, reports Business Insider.

According of the activist group, More Perfect Union, two workers died at the company’s Bessemer, Alabama, facility within 24 hours of each other.

The group said that one of the deceased men had his request to go home denied by HR. Hours later he suffered a fatal stroke on the job.

The group alleges that a total of six people died at the Bessemer facility in 2021 and that Amazon has covered up the deaths.

In April 2022, Amazon was accused of illegally attempting to influence a defeated vote to unionize in the Bessemer facility, reports CNBC.

City of Berkeley removed more than 75 tons of trash and human waste from...