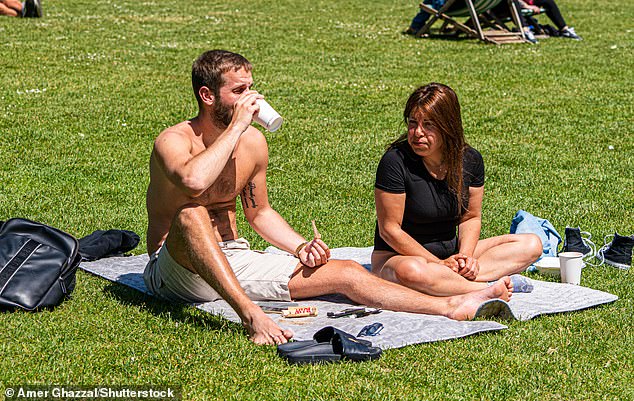 Our British summer is a wonderful thing. No matter how many decades pass, it remains the perfect example of the triumph of hope over experience.

In Britain we cram more social activity into the months of May, June and July than any other country I can think of.

The Season, no longer the formal event it once was when young women were paraded to find a suitable match, is still a catch-all for festivities rooted in our rather romantic vision of the British summer – long days and light evenings, a gentle breeze, a mellow temperature.

We plan activities in verdant gardens and indulge our obsession with competitive outdoor sport.

In Britain we cram more social activity into the months of May, June and July than any other country I can think of. People are seen enjoying the warm weather in a London park on May 27th

There will be strawberries and cocktails, cream teas and seersucker jackets. This year, there will be the Jubilee street parties strewn with bunting to add to the Chelsea Flower Show, Ascot, the Queen’s Garden Parties, Henley, Lord’s, Wimbledon… and that’s before you take into account summer parties with friends.

Oh and the weddings, of course. And what else will there be? Almost always, rain. Scattered showers, a light drizzle, downpours. Our summer is inevitably a damp affair.

But rain does not stop play. Absolutely not. Never has done, never will. We carry on regardless, putting our best foot forward as it sinks into the soggy lawns and smelly coconut matting that lines the paths, huddling under umbrellas and scurrying for the safety of the dripping marquee.

Although England is said to average just ten days of rain during the summer months, try telling that to anyone planning a party. Beware deciding to ‘risk it’ and forgo any outdoor cover. My personal best in this department was when I hosted a party in my garden the evening I received an OBE in June 2005. 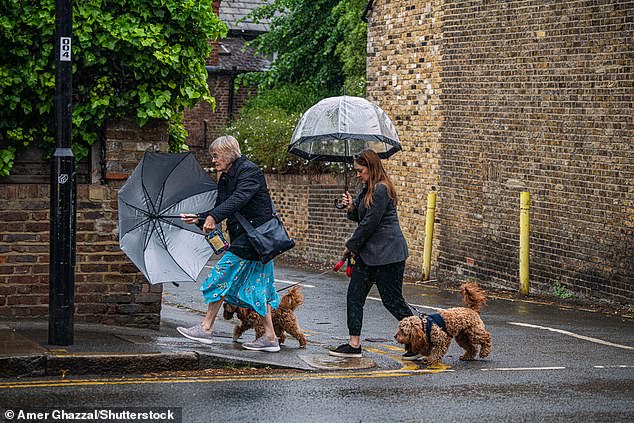 Oh and the weddings, of course. And what else will there be? Almost always, rain. Scattered showers, a light drizzle, downpours. Our summer is inevitably a damp affair. People are pictured in Wimbledon, London on May 20th

I doubt many of those lining up in the State rooms to receive their medals that day had rushed to Portobello market at dawn and spent the early morning asking stallholders where they got their protective tarpaulins, having realised far too late that torrential rain was now horribly likely. And then to be found, minutes before the evening kick-off, perched on a ladder attempting to tack the whole thing to trees and a trellis.

But of course the rain didn’t stop the fun at all. A little bit of meteorological drama often adds to the whole occasion. ‘Sorry about the weather,’ Prince William greeted guests at this week’s Buckingham Palace Garden Party as the heavens, along with hundreds of umbrellas, opened. How many times, I wonder, has the Queen found herself saying that over the past 70 years?

Why I get cheesed off after parties

On the subject of parties, the calibre of provisions at the Downing Street events was terribly poor by any standards.

Unhealthy packets of crisps and plastic-wrapped sandwiches certainly demonstrated that, whether or not these gatherings were ‘parties’, nobody cared much about what they were eating. What was the non-carb eater supposed to do? Party food is generally a nightmare both to provide and to eat.

Canapes are lethal on the clothes front. Not only do they run the risk of landing a nice juicy stain on your white lace top, they also get stuck in your teeth. The host, meanwhile, must try to foil greedy guests who position themselves strategically near the kitchen, ready to pounce on trays as they emerge, leaving sparse pickings for those at the other end of the party.

And it’s impossible to judge how much people will eat. Caterers base it on a number of canapes per person, but I doubt that a model agency bash gets through as many as a rugby team do. As a rule of thumb, it’s always more than you think.

The only food that’s invariably left after the party is cheese. Cheeseboards look glorious – as do wheels of parmesan and brie – but come clearing-up time, there’s always a pile of sweating, picked-at fromagerie to clog up your fridge for weeks to come. 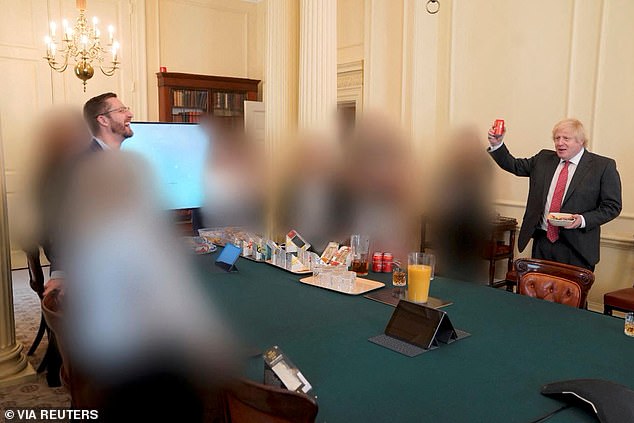 Unhealthy packets of crisps and plastic-wrapped sandwiches certainly demonstrated that, whether or not these gatherings were ‘parties’, nobody cared much about what they were eating. What was the non-carb eater supposed to do?

It’s jolly annoying, but the reality is that although most of us are battling increases to our grocery bills, a substantial number of people are better off now than ever.

So much so that the Business of Fashion website reported this week that Chanel was opening boutiques across the world, dedicated to its top spenders. Chanel has had a 50 per cent increase in business, which means its stores are becoming overcrowded and losing their exclusive, privileged feel.

So not most of us, then.

Where are all the Elizabeth Line fans?

The extraordinary thing about London’s new Elizabeth underground line is it’s empty. Cavernous stations, vast escalators, acres of platform – but hardly any people. At least not since that mad first day when hordes wanted to be the first to try it out. Does everyone think it’s bound to run into teething problems? As one of the few who braved the journey from Paddington to Farringdon, I’m here to report it’s terrific.

I doubt Amber Heard was best pleased when she found out that Kate Moss was testifying for Johnny Depp last week.

Heard had previously suggested Depp had thrown Moss, his then girlfriend, down the stairs during a Jamaican holiday. But the British model, in measured tones, claimed he had done no such thing.

Beamed in via video link from Gloucestershire, and wearing what has become the courtroom uniform of prim shirt and black jacket, she broke ranks with her general policy of speaking as little in public as possible. Kate Moss letting the world hear her voice was a powerful case for the defence.

My little peonies are such a pain

What is it with peonies? They are glorious, but impossibly hard to grow. There’s a patch of them in our garden, and every May it looks as if, for once, a spectacular display might appear.

Then, as the month nears its end, it becomes obvious that once again the tiny buds I had such hope for are going to stay minuscule hard beads, never emerging into the blousy blooms I so love. A perennial disappointment.

Russian kindergarten children dress up as tanks adorned with a ‘Z’ for Victory Day...

Our Top Muscle Building Tips Are Here For Your Consideration!