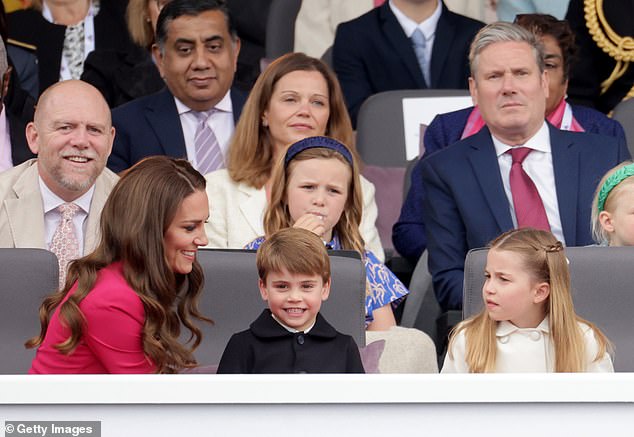 The Duchess of Cambridge had her hands full with her youngest son Prince Louis at the Platinum Pageant, but this sweet video shows she wasn’t too busy to comfort another restless little one.

Kate, 40, spent time comforting Zara Mike and Zara Tindall‘s eight-year-old daughter Mia after she climbed over to her seat looking for a cuddle.

In a clip shared by royal watchers on Twitter, Kate is seen stroking Mia’s arm and straightening her hair as the royal whispers something in her ear.

Kate Middleton (pictured, left) attended the Platinum pageant on Sunday, where she was seated with her children Prince Louis, 4, (centre) and Princess Charlotte, 7 (right). Mike Tindall, Princess Anne’s son-in-law, and father of Mia Tindall was seated nearby (upper left) 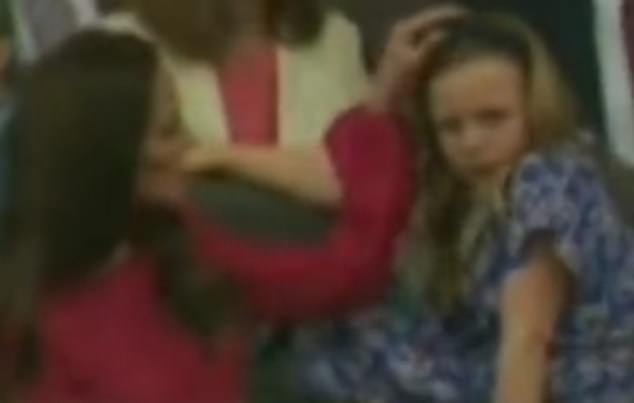 During the event, Mia Tindall appeared upset at one point, crawling onto Kate’s lap for comfort. The older royal stroked the youngster’s hair and chatted with her

Sunday’s pageant, which marked the finale of the four-day Platinum Jubilee celebrations, was attended by a host of royals including the Cambridge family.

Also in attendance were Zara Tindall, 41, and her husband Mike, 43, a former England rugby player, as well as their oldest two children, Mia, and Lena, three. Their one-year-old son Lucas was also briefly spotted, delighting some royal watchers.

The families, who were seated next to each other, were seen chatting and having fun throughout the parade.

However, as footage shows, at one point Mia Tindall appeared upset, and crawled onto Kate’s lap for attention, resting her head on her shoulder.

Princess Charlotte, seven, also noticed that Mia was upset, and tenderly rubbed her back in a pacifying gesture.

The sweet moment was not the only endearing interaction captured between the adults and children during the pageant.

Pictures from the event also show Mike Tindall having a funny interaction with four-year-old Prince Louis, who appeared restless at one point.

Louis, the youngest of the Cambridge children, has become a firm favourite among royal watchers thanks to his funny antics throughout the Jubilee. 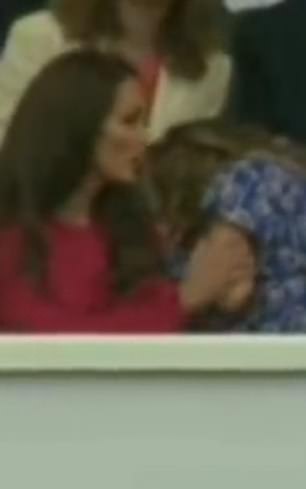 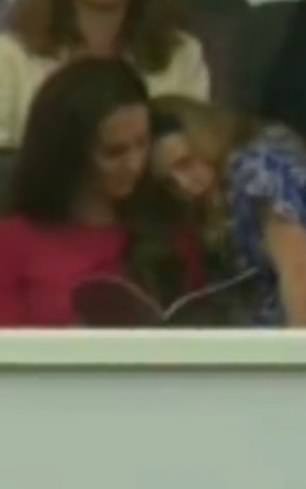 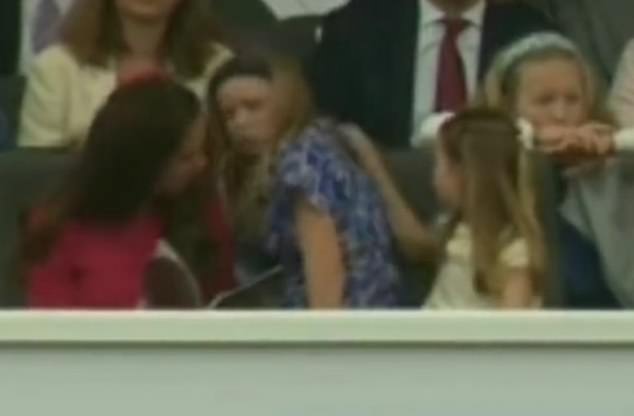 Princess Charlotte, 7, (pictured, right) was also seen stroking Mia Tindall’s back, in a sweet gesture that seemed design to comfort the youngster 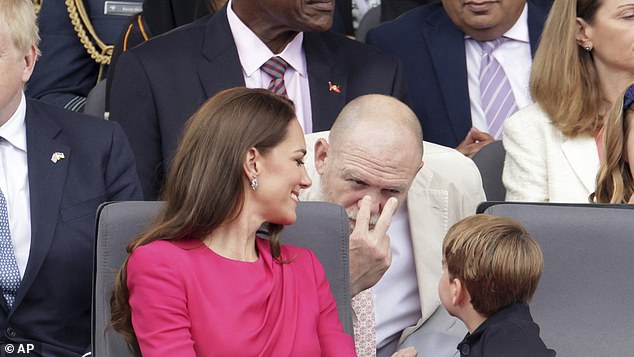 During Sunday’s Platinum Pageant, Mike Tindall sat behind four-year-old Prince Louis in the Royal Box, and entertained the boy with funny faces to keep him amused.

Footage from the weekend shows the young prince pulling a range of funny faces, and barging past people on Buckingham Palace balcony in a bid to get close to his great grandmother the Queen.

At times during the pageant on Sunday, Louis was seen clenching his fists, sticking out his tongue, waving his arms in the air, putting his hands over his mother’s mouth and standing in his seat for a better view of the spectacle.

When it appeared the four-year-old was getting a little fractious, Mike Tindall was on hand to entertain him, with hilarious images showing the former England rugby player engaging with the youngster, pointing at his own eyes, in an ‘I’m watching you’ gesture.

The hilarious snap was just one of the funny photos that emerged of Mike Tindall during the four-day celebration. 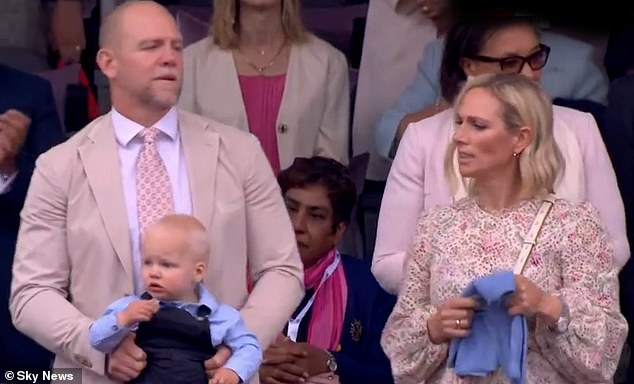 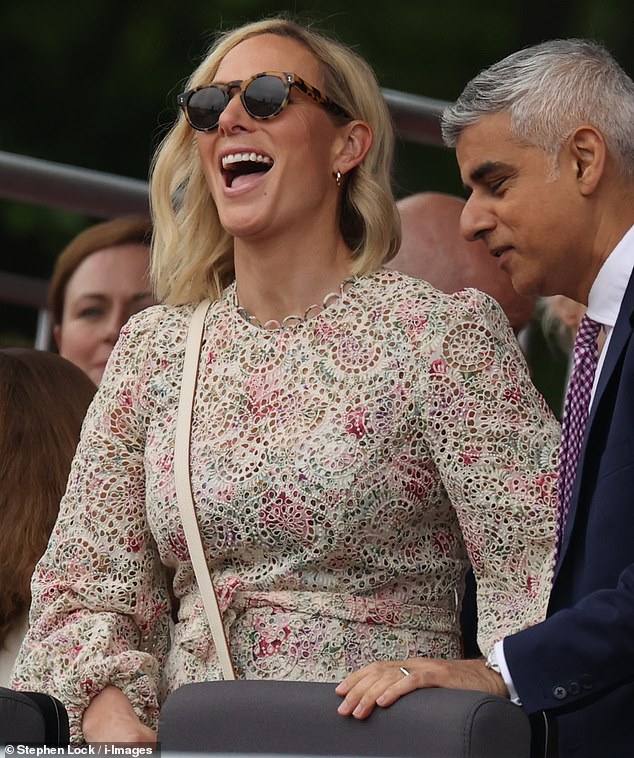 As well as his antics entertaining Louis during Sunday’s pageant, the former England rugby player showed he is the royal family’s secret weapon sharing amusing pictures on Instagram, in which he wore his wife Zara’s hats.

These included the father-of-three wearing fuchsia headgear after he and Zara attended Trooping the Colour on Thursday, as well as donning her bright red floral head after Friday’s thanksgiving service at St Paul’s.

Then, on Saturday, the former athlete traded his top hat with Zara’s blue one as the pair attended Epsom Race Course ahead of that evening’s concert.

Ahead of the four-day festivities, Mike had revealed that although he had no official role to play, he was looking forward to the events.

Speaking about her Majesty on Good Morning Britain last month, the father-of-three said: ‘I think the Queen is an unbelievable lady…I think people think she’s invincible sometimes, but you have to remember she’s a 96-year-old at the end of the day.

‘She’s incredible at what she’s done over her lifetime and I can’t wait to celebrate that.’ 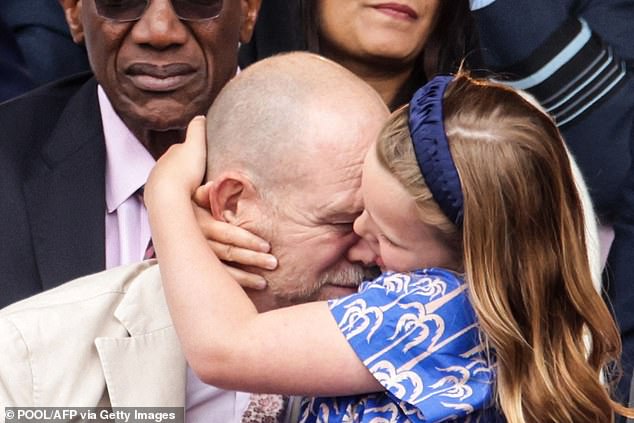 Good sport: while at the Platinum pageant, Mike Tindall was snapped being manhandled by his daughter Mia, who wrapped her arms around his head in a bear hug 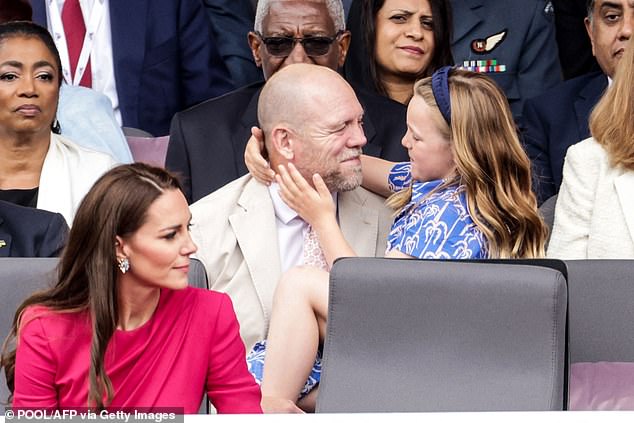 The former athlete, who has spoken extremely highly of the Queen, appeared to enjoy himself as he attended a string of events marking her Majesty’s Platinum Jubilee

Last year, speaking on Channel 5’s, Zara and Mike: No Nonsense Royals royal expert Brenda Emmanus said that the  sportsman was an ‘asset to the Firm’ as he was a ‘connection to normal people’.

Mike Tindall has been an asset to the royal family in that he’s a connection to normal people,’ Brenda said.

‘They live their own lives and make their own decisions, the public doesn’t pay for them. They’re practical and accessible, the most normal and delightful couple.

‘They’re keen to do their own thing and pay their own way. Sponsorship is carefully crafted to enhance brand Tindall, and they’re making the most to be seen as the embodiment of country life,’ she added.

Gwen Stefani says it was ‘really fun’ doing her own makeup for the 2022...

MAFS prank: Al Perkins ‘gets a girl pregnant on a one-night stand’