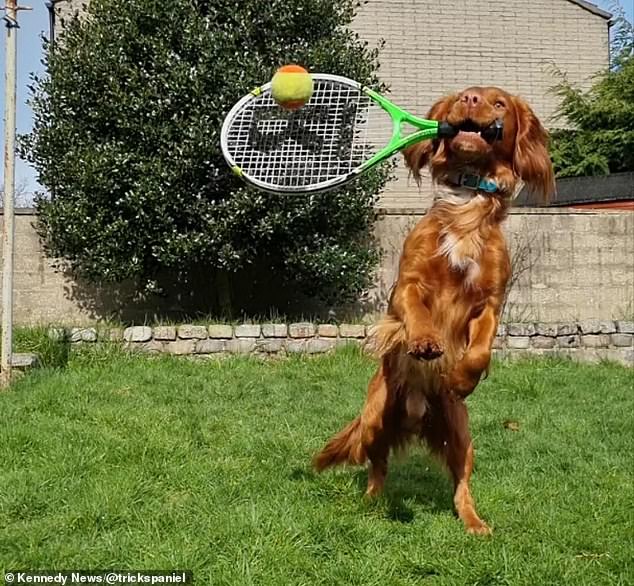 This is the moment a clever dog showed off his hidden talents by playing tennis with his owner in an adorable video.

Leo the cocker spaniel, who lives in Aberdeen with his owner Emily Anderson, had already impressed her by showing an aptitude for ping pong.

But she was left shocked after the two-year-old pooch picked up a tennis racket in his mouth and naturally started knocking balls back at her when she threw them at him.

Leo the cocker spaniel, from Aberdeen, Scotland, has wowed his owner after showcasing his ‘hidden ability’ with tennis racket 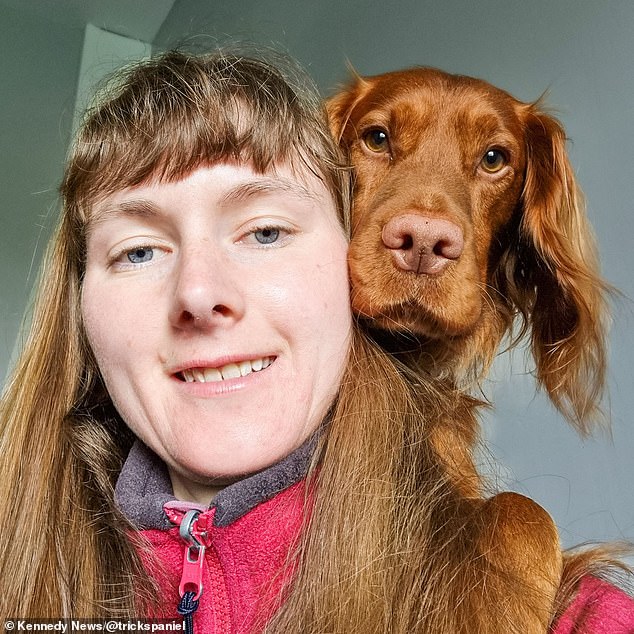 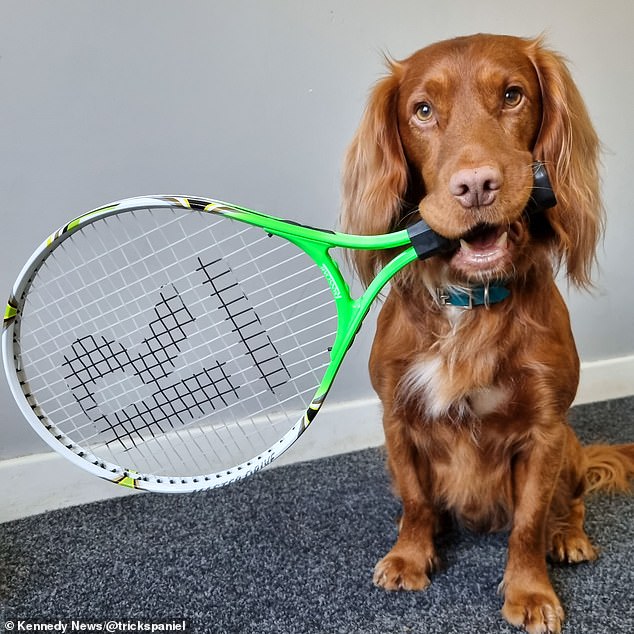 In video shared on the pair’s Instagram page, @trickspaniel, Leo can be seen holding the tennis racket in his mouth and leaping at tennis balls as Ms Anderson throws them at him.

When he does so he then reverses to get straight back into position for the next throw.

Ms Anderson has been building his skills since first seeing his potential with a ping pong ball, gearing up to eventually having him hit the ball over a tennis net.

The 31-year-old bought a tennis racket for him, and was left stunned when the clever canine picked it up in his mouth first time, putting his ‘hidden talent’ on display. 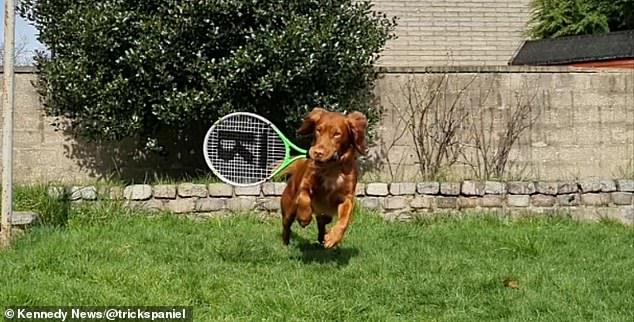 An adorable video showing the clever pooch in action was shared by Ms Anderson on their Instagram page, @trickspaniel 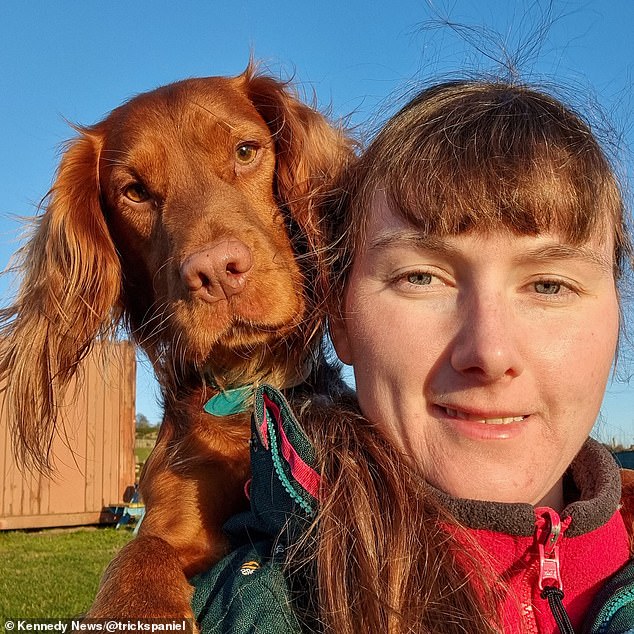 Ms Anderson, 31, said she didn’t think the two-year-old dog would manage at first as the ball is so heavy

‘He’s a natural. This [inside the house] was his first ever try,’ she said.

‘I ordered the tennis racket with a short handle. It arrived, I unpacked it and gave the racket to him.

‘I was round at a friend’s house and we were speaking about what else we can do with Leo.

‘She said ‘tennis’, I didn’t think he’d manage as the ball is so heavy.

‘As with ping pong I asked him to back away, showed him the ball, threw it at him and he hit it for the first time.

‘He just knew what he was doing, it really surprised me.

‘I sat there for five minutes like ‘what the hell just happened?”

He might not be able to play at Wimbledon, but his tennis development shows no sign of slowing down.

‘I’m not sure if it’ll work but we’re going to try and get him to hit it over [a tennis] net,’ Ms Anderson said.

‘He learnt to play ping pong last May. 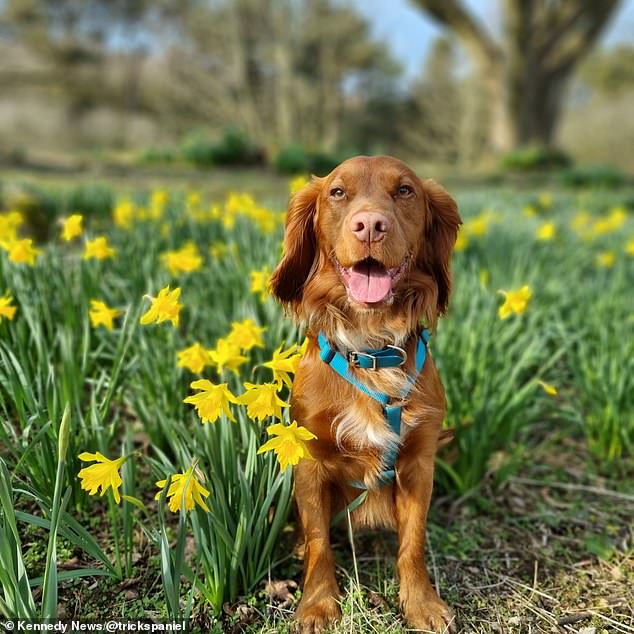 It was no problem for Leo, who seems to be a natural when it comes to the sport, although he might not make it to Wimbledon anytime soon 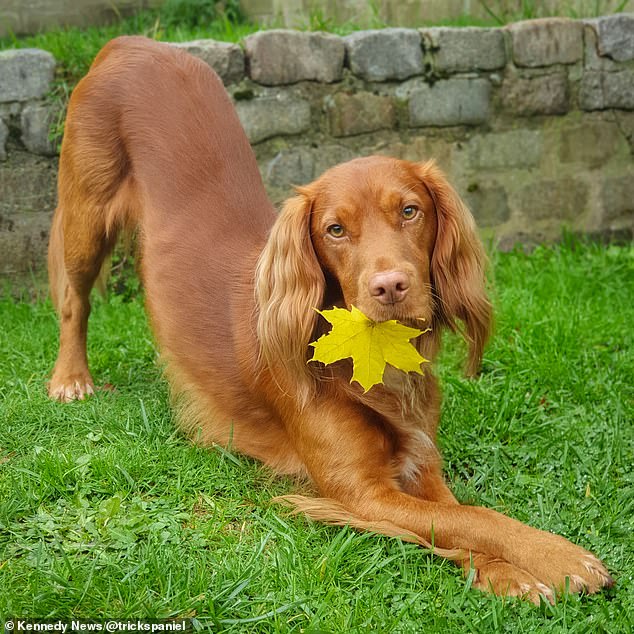 It’s another skill to add to his bow, with the dog already having learned how to do CPR and play the xylophone

‘It’s very similar to ping pong but a totally different shaped racket to fit in his mouth.

‘He does flyball and the balls we used were from that, so I thought it’d distract him a bit and he’d catch it in his mouth but he didn’t.

‘I thought he was going to spit out the racket and go for the ball.

‘He’s got a hidden talent I didn’t know about. From the early days of teaching him tricks, he just picks up stuff really quickly.

‘He might not quite give Andy Murray or Rafael Nadal a run for his money but it’s fun. It makes people smile.’

She claims she is now receiving messages from other dog owners asking her for her training secrets after being inspired by Leo’s incredible skills. 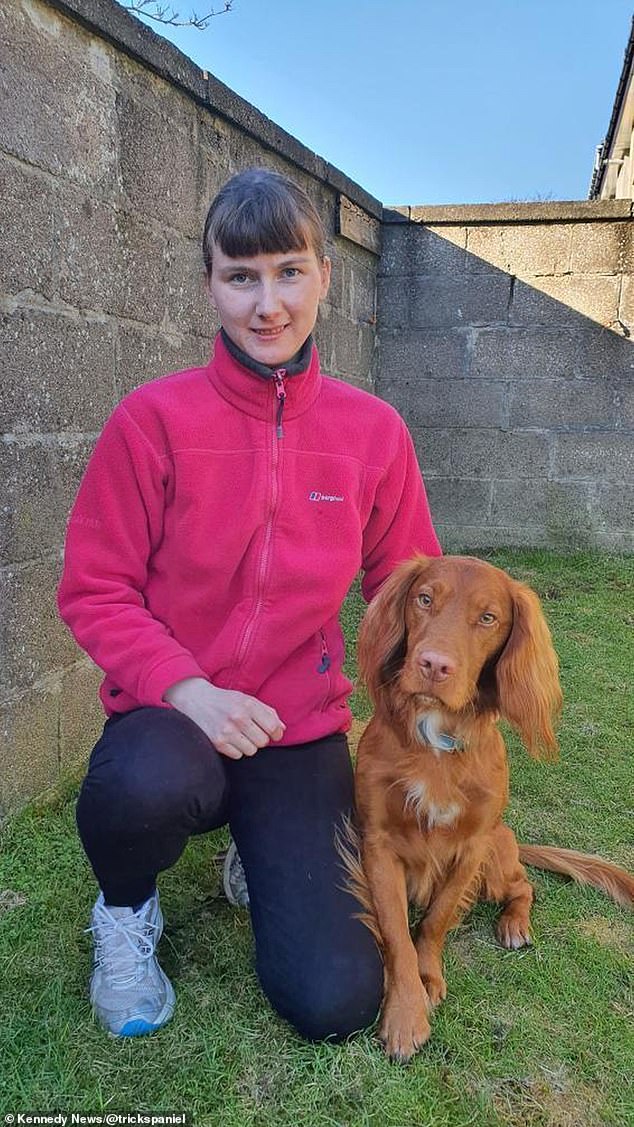 The pair train three times a day, with Ms Anderson saying Leo is ‘so incredibly happy’ when he’s practicing

Their tennis video on Instagram has now been viewed more than 52,500 times and received more than 1,900 likes.

Emily said: ‘I’ve had quite a few messages asking how I trained it but I didn’t really, I just handed him the racket.

It’s all in a day’s work for Leo, who can add it to his already impressive list of skills and abilities.

The adorable duo regularly train up to three times a day, with Ms Anderson having successfully taught Leo how to paint and even perform CPR.

She says her clever dog often learns tricks in only 20 minutes, and sometimes does it so quickly she has to watch it back in slow motion to figure out how he has done it.

Among other skills he has gained is the ability to play the xylophone, with Ms Anderson revealing his training really went to the next level when the country went into lockdown at the start of the Covid pandemic.

‘I knew he’d always enjoyed his training so I decided to focus on doing a bit more of that with him and that’s how the tricks started,’ she said.

‘The first thing we did was roll a blanket and then stack the rings and it just snowballed from there.’

She added that he is ‘so incredibly happy’ when he trains, and will often wake himself up later ‘by wagging his tail so much’.

Woman, 36, sheds an impressive 10st to renew her vows