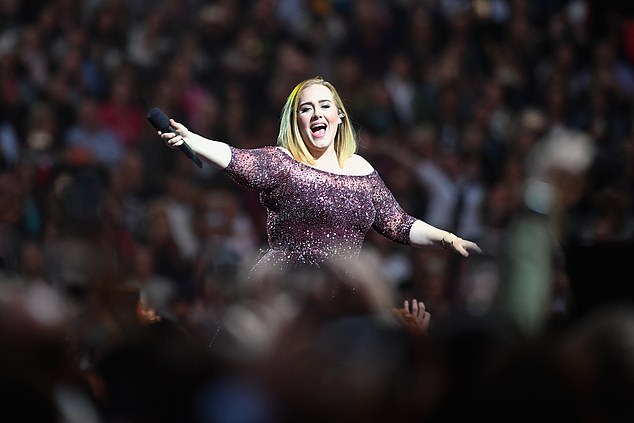 Superstar Adele is returning to the UK for the first time in five years tonight as she takes to the stage at Hyde Park in front of a sell out crowd.

Ed Sheeran is also performing at his final sold-out Wembley Stadium gig this evening as the two British legends take the stage with excited fans already flocking to the venues ahead of the stellar concerts.

The wait is finally over for keen Adele fans as she makes her return to play for UK audiences tonight at BST Festival in Hyde Park.

Fans were seen queueing up in central London hours ahead of the gig in a bid to get the perfect view of the Hello singer.

It’s the first time she has performed for her British fans since her tour at Wembley Stadium in June 2017 – but she left crowds disappointed five years ago as she cancelled the final two nights because she damaged her vocal cords.

Adele, pictured performing at Wembley Stadium in June 2017 – which was her last UK tour for the general public. Tonight, she returns to London to perform at her sold-out gig in Hyde Park 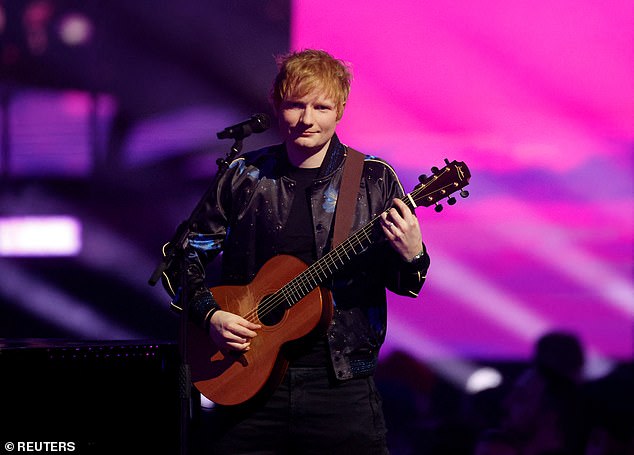 Ed Sheeran pictured performing at the Brit Awards in February 2022. He is likely to play his final tour gig on British soil tonight at Wembley Stadium 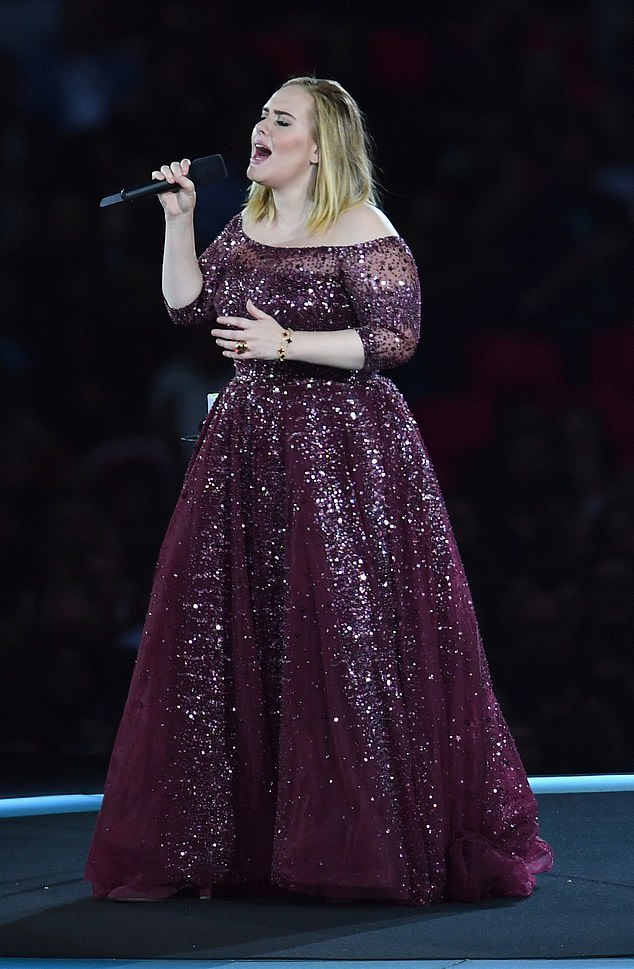 Are they both performing tonight?

The two British legends are performing tonight in London.

Fans of Ed Sheeran are expected to flock to Wembley Stadium in North London to watch him perform the fourth night of his tour in the capital.

Tonight marks Adele’s return to performing on UK soil, for the first time in five years.

She will be singing at her sold-out show in London’s Hyde Park.

Are tickets for both sold out?

Tickets for both Adele and Ed Sheeran’s concerts are sold out for tonight, according to official websites.

BST says there are no more tickets available for Adele’s performance at Hyde Park.

Despite official tickets selling out, there are people reselling their tickets online.

Adele is performing tomorrow too?

Adele is also performing at Hyde Park on Saturday, July 2 – but tickets are also unfortunately sold out.

How long is it since they both were on tour in the UK?

Both Adele and Ed Sheeran played at the Brit Awards in February 2022 – but it has been longer since they toured as solo artists for the general public.

Adele hasn’t toured in the UK since 2017, when she packed out Wembley Stadium.

Ed Sheeran on the other hand has performed to British crowds a hand full of times in 2021 and 2019, including at the O2 Shepherd’s Bush Empire and Chantry Park in Ipswich.

Ed Sheeran, on the other hand, has performed to British crowds a hand full of times in 2021 and 2019, including at the O2 Shepherd’s Bush Empire and Chantry Park in Ipswich.

He rocked adoring crowds at the sold-out Wembley gig last night – which was the fourth of his five-day stint at the London venue.

But tonight marks his final tour date in the UK for the foreseeable future – after announcing that The Mathematics Tour will likely be his last as he seeks to dedicate more time to family.

Adele and Ed Sheeran, 31, both played songs briefly at the Brit Awards earlier this year – however tonight’s shows are for the general public.

Yesterday, Adele shared a glimpse of her rehearsals for tonight’s much-anticipated show.

The singer, 34, donned a casual ensemble in the Instagram images shared on Thursday as she belted out a track during the practice session.

The Easy On Me hitmaker looked on fine form as she sat cross-legged on a chair and passionately sang into a microphone ahead of the performances on Friday 1 and Saturday 2 July.

The mother-of-one went make-up free while allowing her caramel locks to loosely cascade over her shoulders.

Wanting to drum up excitement for her rare live performances, Adele asked in her caption: ‘Who’s ready for tomorrow!?’

And though many of her fans were thrilled at the prospect of seeing her perform her biggest hits live in person, there were still plenty of others who are disappointed in the lack of information about her Las Vegas shows.

In January, she tearfully cancelled her long-awaited residency in the US.

The last-minute cancellation left many fans out of pocket after spending thousands on tickets and plane fares to see her onstage.

Meanwhile, last-minute concert-goers have today flocked to social media to buy tickets being resold by punters ahead of the show-stopping night for British music.

Fans who can no longer attend the concerts are flogging their tickets – some for more than face value.

Both Adele and Ed Sheeran’s concerts tonight are sold out, according to official websites.

Only a few tickets, including hospitality tickets, remain for the Shape of You singer’s gig – which are being sold for nearly £350.

Some Brits have made the most of the stellar musical weekend, purchasing tickets to see both Adele and Ed Sheeran tonight and last night.

One woman wrote: ‘One for the boy Ed Sheeran – Wembley yesterday. One for the girl Adele – Hyde Park today. Exhausted already and £££. All worth it for the memories.’

Another fan of Adele posted a clip this morning as he camped out at Hyde Park, ahead of her return to the stage.

He said: ‘Good morning to Adele! We are ready, in queue for tonight. Can’t wait to see you perform live again after 5 years!’ 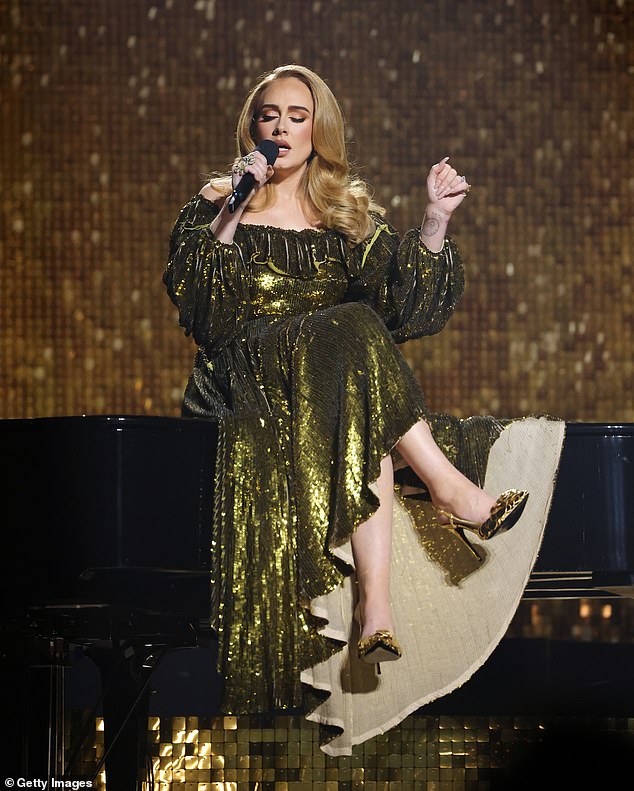 Performance: The star, 34, took to the stage at London’s O2 Arena and performed I Drink Wine, a track from her latest album 30, during the Brit Awards earlier this year 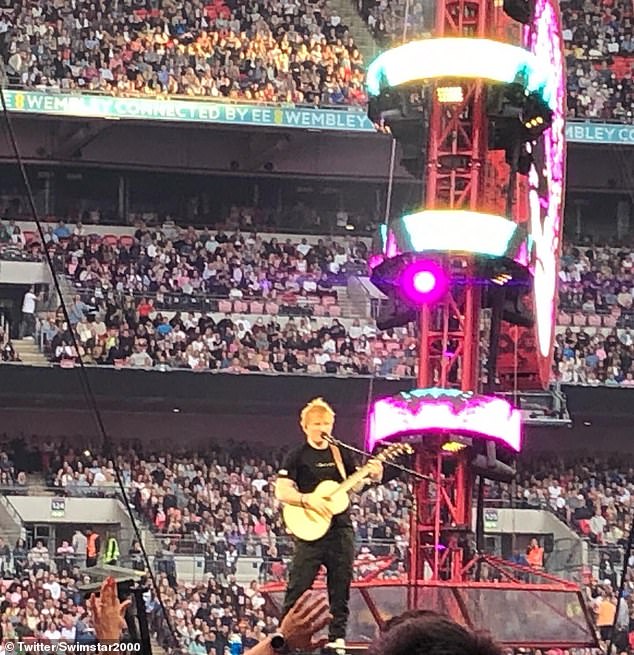 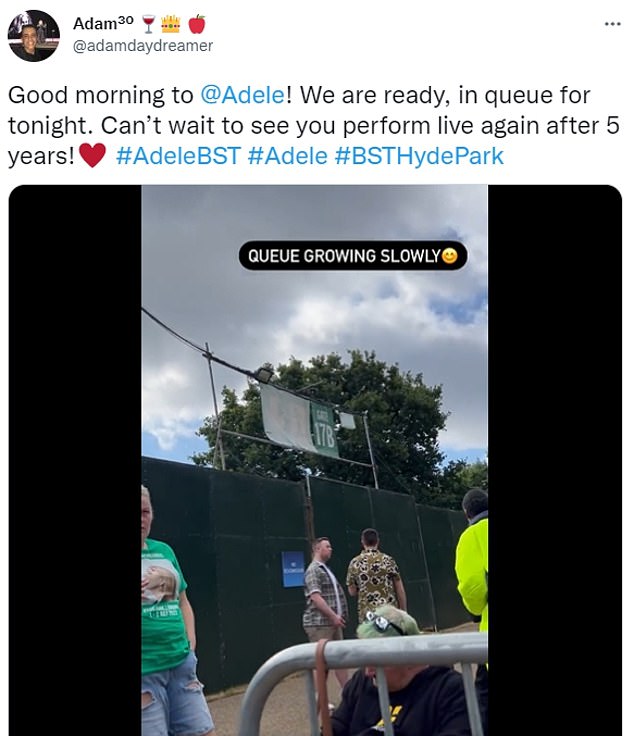 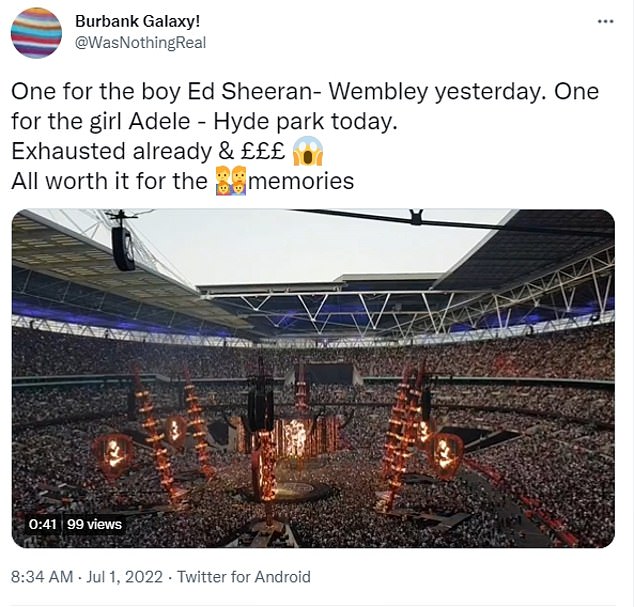 Thousands of candles are lit as 260 million Orthodox Christians mark Easter in Julian...

Damian Lewis ‘will receive a CBE in the Queen’s Birthday Honours for his charity...