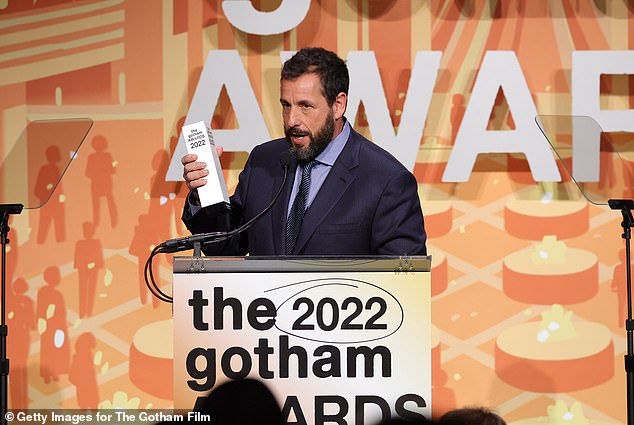 Adam Sandler had the audience in stitches at the 2022 Gotham Awards Monday night in New York when he accepted a Film Tribute award.

The 56-year-old funnyman accepted his award with a hilarious speech that he claimed was written by his teenage daughters Sunny, 14, and Sadie, 16, who are set to star in his new coming-of-age comedy You Are SO Not Invited To My Bat Mitzvah.

Funnyman: Adam Sandler, 56, had the audience in stitches as he accepted his Film Tribute award at the 2022 Gotham Awards in New York Monday

The Emmy nominee claimed the teens required him to give in his ‘goofy southern accent’ which he often uses on such occasions.

It began with the traditional gratitude. ‘Thank you for giving our daddy, Mr. Adam Sandler, the prestigious lifetime, primetime, all-time GOAT achievement tribute award or whatever this frankly disturbing object is supposed to f***ing represent,’ the actor read as he held his oblong shaped trophy.

‘It means a lot to him, seeing as most of the awards on his trophy shelf are shaped like popcorn buckets, blimps,’ referring to the actor’s nine Kids Choice awards and six MTV Movie awards. 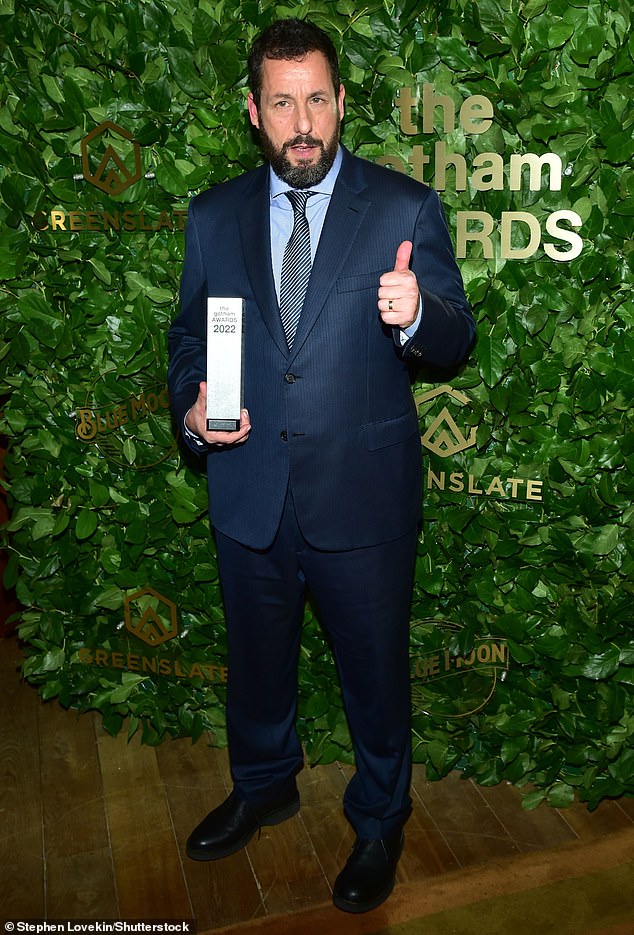 Speechwriters: The actor read a speech allegedly written by his daughters Sunny, 14, and Sadie, 16, who he said required him to read it in a ‘goofy southern accent’

The other statuettes lining the trophy case are, ‘fake mini-Oscars that say Father of the Year, which he sadly purchased himself.’

The teens claimed their father’s career, which started in 1988 was formed by two guiding principles – ‘people in prison need movies too, and TBS needs content.’ 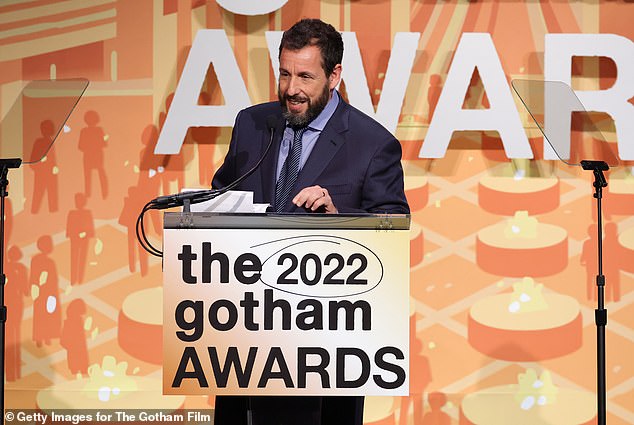 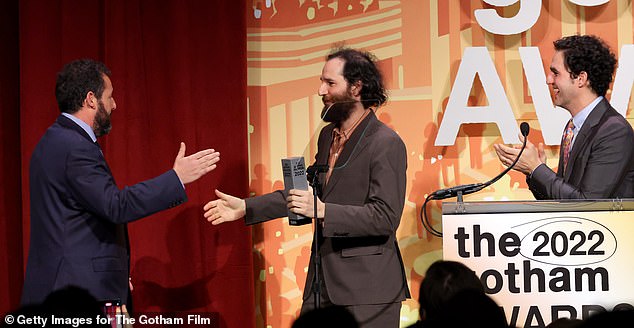 Presenters:  The award was presented by Uncut Gems directors Josh and Benny Safdie

They then listed his most popular films: Billy Madison, Happy Gilmore, The Wedding Singer, The Waterboy and Big Daddy.

‘”Which one is Big Daddy again?” we asked him one time.  “The movie with the little cutie who grows up to be Cole and Dylan Sprouse?”‘ 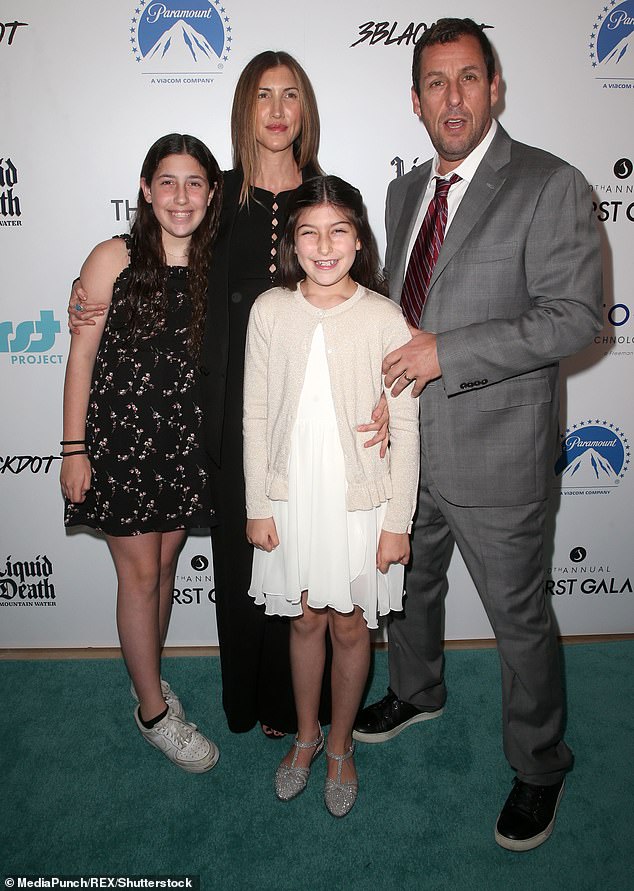 The girls then checked off their father’s more dramatic works, such as Punch Drunk Love, The Meyerowitz Stories, Uncut Gems and ‘the basketball dramady masterpiece, Hustle.’

‘Films that were received with orgasmic critical acclaim, but also left audiences baffled as they pondered the mystery “How did Bobby Boucher (his character from The Waterboy) get all up in my feelings and make me laugh, cry and sprint directly to church to ask God why he had blessed one man with more talent than the entire cast of The Poseidon Adventure and Mamma Mia combined?”‘

The speech ended on a sweet note with the biggest thanks going to the girls’ mother and Adam’s wife of 19 years, Jackie Titone.

‘Thank you Mommy for putting up with Daddy and his crazy f***ing mood swings all these years. Now that truly is a feat deserving of a lifetime achievement award.’ 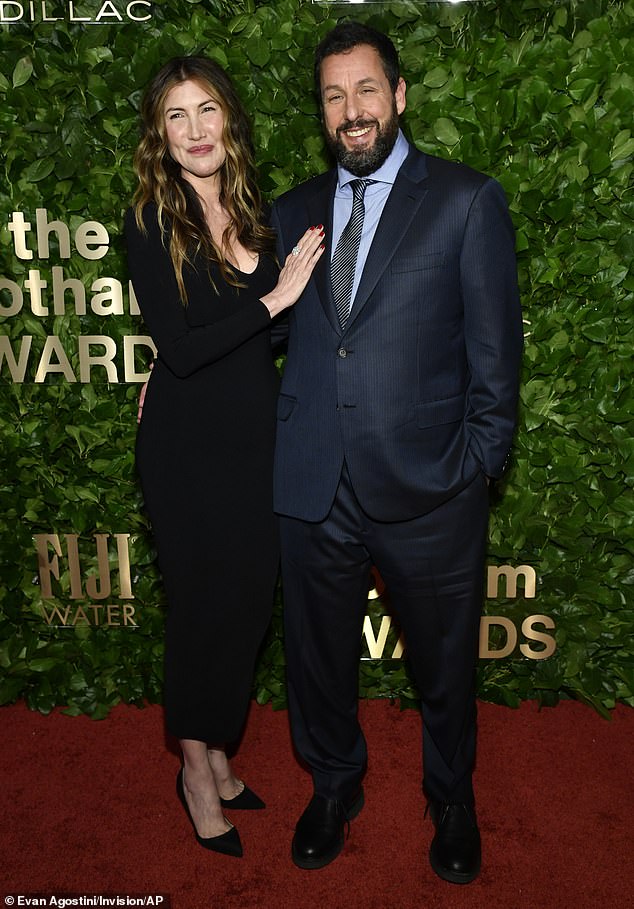 Sweet tribute: The speech ended on a sweet note with the biggest thanks went to the girls’ mother and Adam’s wife of 19 years, Jackie Titone  had ‘put up with Daddy and his crazy… mood swings’

Russia cuts off gas to Bulgaria and Poland in toughest response yet to Western...