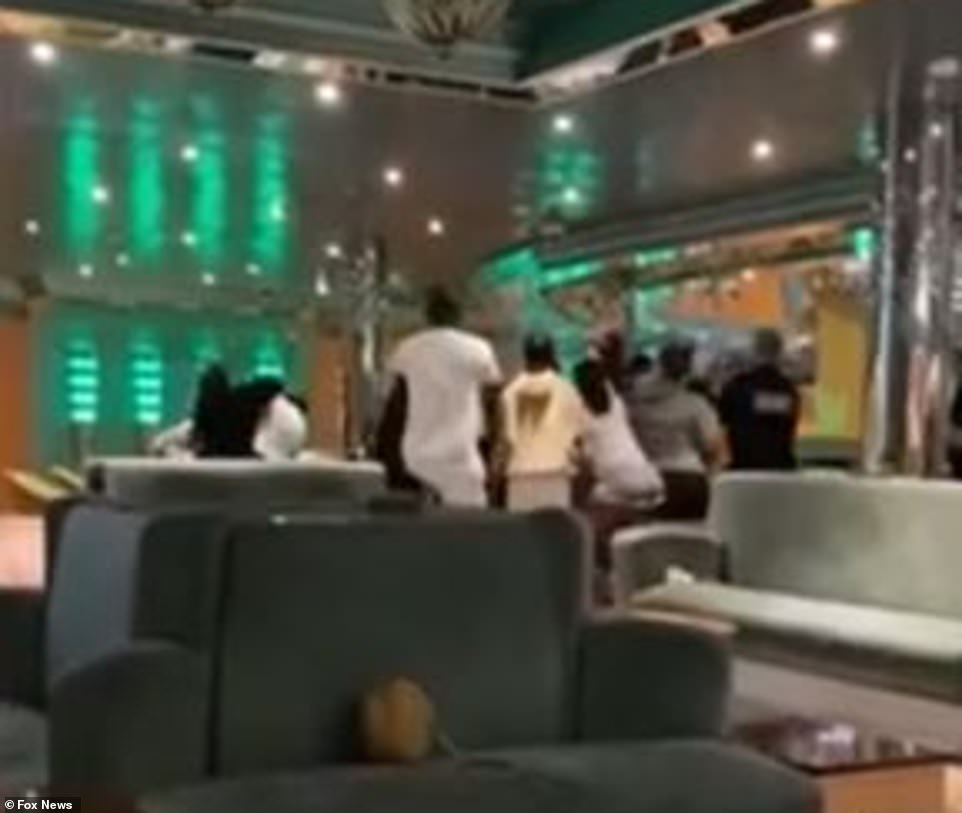 Video of the fracas depicted a chaotic scene as between 40 and 60 passengers began punching and shoving one another.

Although the initial disagreement was between two passengers on the nightclub dance floor, it quickly spiraled out of control with more and more people piling in.

The fight occurred on the final night of the ship’s eight-day Caribbean cruise with stops in Dominicana, Turks and Caicos, and the Bahamas.

Theresa James said the fight started just before 2am and lasted for an entire hour in an area where the ship’s nightclub and casino were located.

Bottles were smashed and a woman was also cut in the melee, although no serious injuries were reported.

The fight ended up moving around the ship from the fifth floor down towards the first floor, all the while a couple of ship security guards attempted to break up the fight where they could – however, they were vastly outnumbered.

It prompted the Coast Guard to escort the ship back to dock and the NYPD to open a probe. 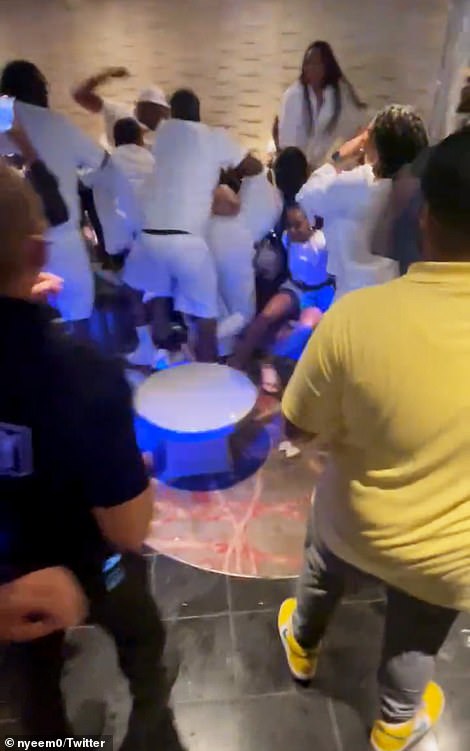 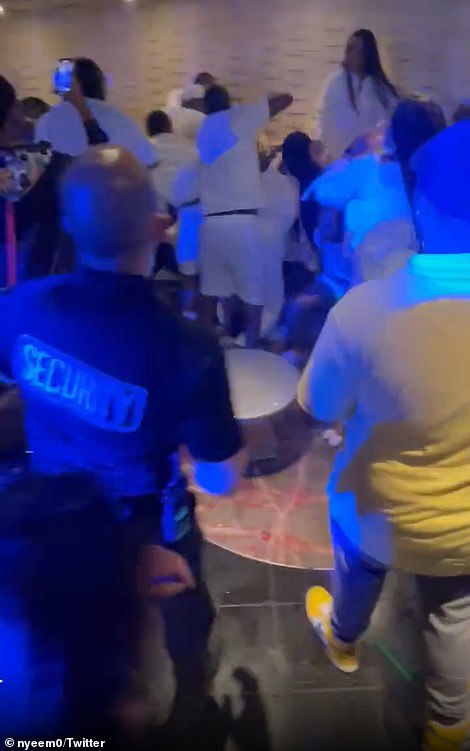 A large brawl broke out in the nightclub of the Carnival Magic at about 5.20am on Tuesday, on the final night of the ship’s eight-day Caribbean cruise 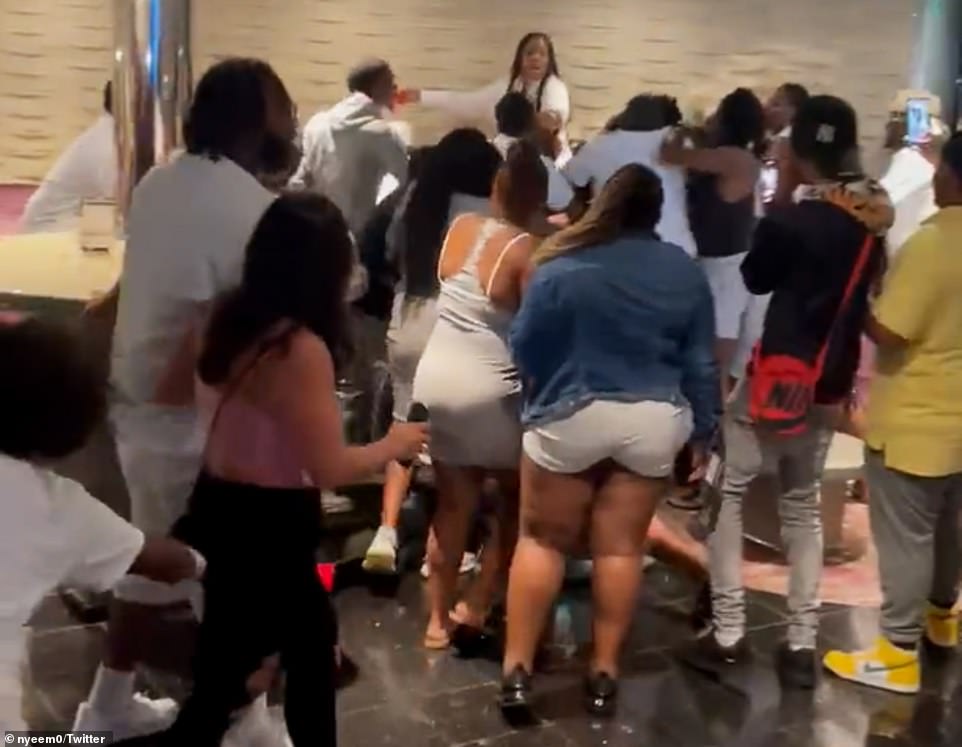 James explained how the guests involved in the fight were in her words, ‘ignorant fools acting stupid’.

She praised the security team for jumping into the middle of the brawl and ultimately calming things down.

One witness, tweeting under the handle @nyeem0, said he was ‘at the bar listening to my own music sipping a Shirley Temple, then the brawl broke out of nowhere!’

He added that some of the passengers were ‘injured and cut up from glass’ and that ‘most if not all’ of the ship’s security guards descended on the club to restore order.

The witness added: ‘it was the last night so i guess they wanted to go out with a bang, but a lifetime ban from cruising is wild lol.’

The brawl took place as the ship approached harbor in New York, but it’s unclear whether the vessel was in New York, New Jersey, or international waters at the time of the fight, making criminal jurisdictional issues murky.

There were no arrests reported reported in the aftermath of the fight, and it was unclear which agency would lead the investigation.

Following the fight, cruise line officials notified the Coast Guard, which launched a boat from Staten Island to escort it to dock in Manhattan, according to WNBC-TV. 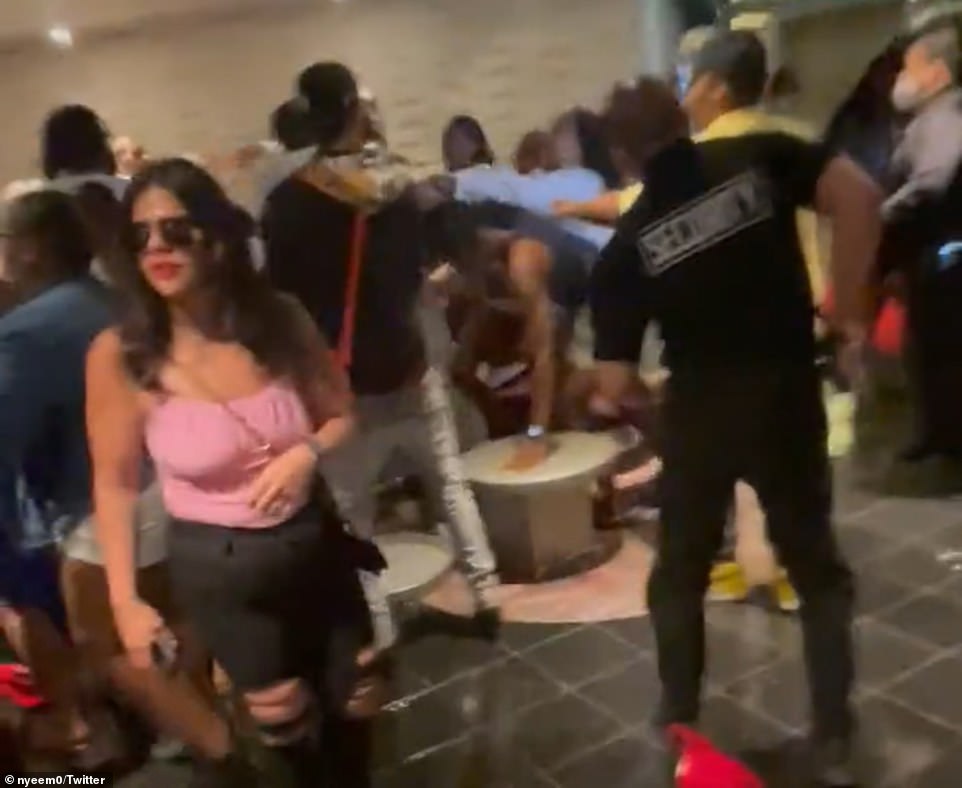 The brawl started as an altercation between two passengers on the dance floor, and cops say it widened into a fight involving as many as 40 to 60 passengers 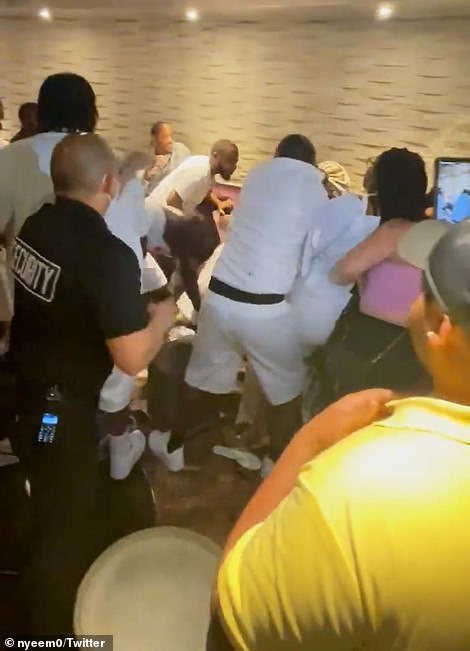 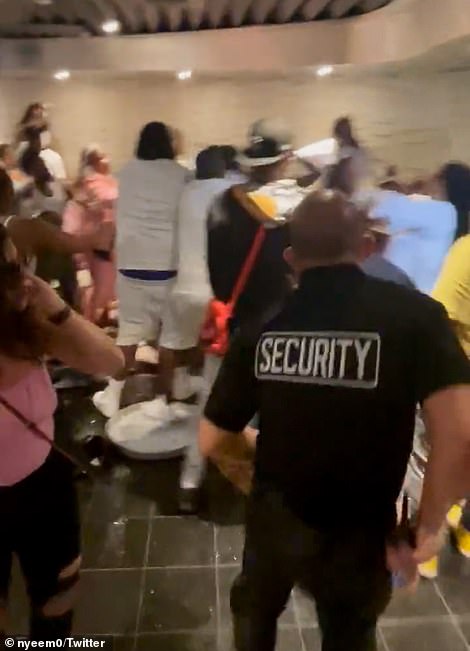 An outnumbered security guard seemed helpless to stop the brawl when it first broke out. Witnesses say security personnel flooded the nightclub to intervene 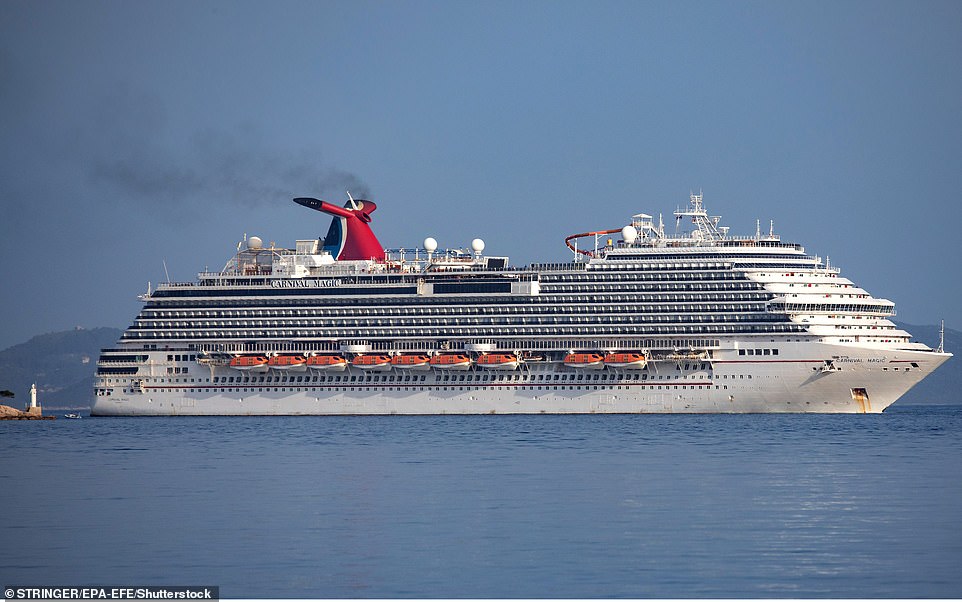 The Carnival Magic (seen in a file photo) was wrapping up an eight-day Caribbean cruise with stops in Dominicana, Turks and Caicos, and the Bahamas

The ship docked without incident at Pier 88, where police and paramedics were waiting to greet it.

Cruise officials notified the Coast Guard, which launched a small boat from Staten Island to escort the ship the rest of the way to its Pier 88 dock.

The NYPD initially described the incident as an ’emergency docking’, but Carnival said in a statement to PIX11 that it was a scheduled port call.

‘Last night while Carnival Magic was returning to New York, a number of guests were involved in an altercation in a nightclub,’ the statement read.

Thankfully no serious injuries were reported and our onboard security team intervened,’ the cruise line said. 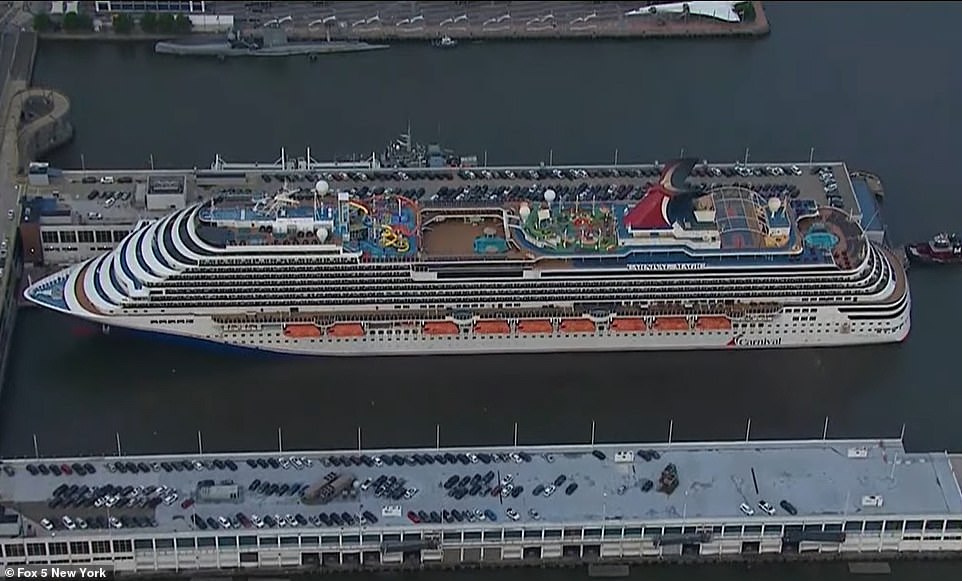 Following the fight, cruise line officials notified the Coast Guard, which launched a boat from Staten Island to escort it to dock (above) in Manhattan

The ship docked without incident at Pier 88, where police and paramedics were waiting to greet it

‘The ship arrived as scheduled this morning and shoreside law enforcement authorities were notified and met the ship to interview suspects and witnesses and conduct an investigation,’ Carnival’s statement added.

According to CruiseMapper, the Carnival Magic has already departed New York on another eight-day Caribbean cruise.

Stops are scheduled in Puerto Rico, the US Virgin Islands, and Turks and Caicos.

Stephen ‘tWitch’ Boss’ mother breaks her silence and posts tribute after his suicide at...

GMB star Alex Beresford calls in the Met Police after being targeted by racist...

William and Kate will be in same part of the US as Harry and...

Hi-de-Hi! star Ruth Madoc has died aged 79 after being rushed to hospital